THE FUGS – TENDERNESS JUNCTION/IT CRAWLED INTO MY HAND, HONEST

Underground, overground: two subversive major label salvos from New York’s folk-punk-poets. Of their time, sure, but still worth yours... 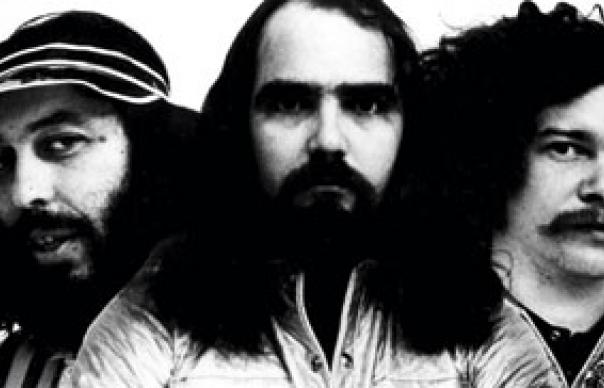 For an underground band, in their lifetime, The Fugs made impressive inroads into the mainstream. By February 1967, founder member Ed Sanders had been on the cover of Life magazine (HAPPENINGS: THE OTHER CULTURE!), their friend and associate Allen Ginsberg had written their liner notes, and The Fugs been asked to perform on the Johnny Carson show. Yet today, it’s a pretty determined countercultural explorer who has even heard the band. How did we arrive at this state of affairs? Who were The Fugs, and why was everyone talking about them?

A group comprising (but certainly not confined to) Ed Sanders, Tuli Kupferberg and drummer Ken Weaver, The Fugs were as garish and impassioned as the ’60s themselves. Formed by poet Kupferberg and scholar/underground publisher Sanders, the band’s origins were in the Greenwich Village of the mid ’60s. At first glance, you’d have called them “folk” – their first LP appeared on Folkways, in a deal brokered with Moe Asch by Harry Smith himself. But if The Fugs’ dealt in protest, it was of the dirty variety.

Named after a euphemism for “fuck” as used by Norman Mailer in The Naked And The Dead, The Fugs specialised in an unstable cocktail of profanity, satire, tape edits, pastiche and stoned raps that gave their work a feel part “stag” skit, part great psych record, part avant-garde assemblage. This, you might think, would seem to place them as kindred spirits with Frank Zappa – but Zappa wasn’t a fan, and dismissed them as “smut rock”. Not that Zappa was wrong exactly – early song titles included “Coca-Cola Douche” and “(I Like) Boobs A Lot” – but even though there was abundant madness in The Fugs’ music, there was still method in it.

The band’s earliest recordings from 1965/6 (with the trio augmented by members of The Holy Modal Rounders), were irreverent, anti-establishment, proto-punk-folk broadsides. They made two further albums with the jazz label, ESP, during which time the band’s challenging, controversial material gained them a cumulative notoriety. 1967 was a watershed year for the band: they were signed, then dropped by Atlantic, an album – The Fugs Eat It – remaining unreleased, when this influential, generally unflappable label lost its nerve. By the time they returned with Tenderness Junction and It Crawled Into My Hand, Honest in 1968 their reputation as standard bearers for outrageousness was set in stone. A news report from that year gives a flavour of what the band were all about away from the studio. In June, the band organised a happening to express their opposition to LA Supervisor Warren Dorn, and his new innovation: “Decency Week”. The ingredients for this “magic ceremony” were a young woman, several chanters and observers, and a carrot. “The Fugs,” explained Sanders, “will spiritually project a young vulva-flower volunteer into the dreams of Mr Dorn.” At the end of the “ceremony”, the proceedings of which are best left to the imagination, the crowd joined a rendition of “My Country ’Tis Of Thee”.

The band’s live performances were not a great deal less outrageous. In the absence of an LP in 1967, the Fugs developed a live show of semi-improvised chaos, and a good dose of that finds its way onto this pair of albums. While much of the singing was done by Sanders, live, a good deal of The Fugs’ charm derived from the stoned poetry and shaggy dog stories of Ken Weaver, whose charisma could apparently “wipe out” an audience.

One such example was a Weaver monologue that was generally announced as “River Of Shit”. On Crawled, however – an example of the censorship with which the band saw themselves to be engaged in a righteous conflict – it’s renamed “Wide Wide River”. An enjoyable piece of Beatnik country, its distinguishing feature is the use of the Harry Belafonte singers to sing a stirring Gospel refrain (“River of shit…”).

Today, it’s slightly flabbergasting that this was taking place on a major label, with major budgets, but it was a development that The Fugs welcomed with open arms, and even respect. If they felt they had lost out by not being able to release an album in ’67, now they took advantage of the bigger budgets to enhance their production values and by recruiting more accomplished musicians: guitarist Danny Kortchmar and bassist Charles Larkey both later played with Carole King, and became ubiquitous LA session men in the ’70s. What they helped Sanders, Kupferberg and Weaver create was music that has its origins in pastiche, from doo-wop to psychedelic rock, but which is so accomplished that it retains a considerable power. Of the two albums, Tenderness Junction is probably the most accessible: it opens with the thrilling “Turn On, Tune In, Drop Out”, and includes the wonderful “The Garden Is Open”. Their intentions may have been different, but there’s a kinship here with the work of the Incredible String Band.

It Crawled… opens with “Crystal Liaison”, a psychedelic surge of trumpets and guitar. Side 2 of the original album, meanwhile, comprised snatches of vulgar but hilarious speech and song. It’s not what you’d call essential listening today, but it’s a neat encapsulation of the band’s mode: their humour was key to their subversiveness, but they were still capable of a satirical, almost incantatory power quite aside from the wet dream-based gags. “Exorcising The Evil Spirits From The Pentagon” (from Tenderness) is a live recording in October 1967 which has a satirical and near-mystical power, and its “Out, Demons, Out!” chant was later adopted by the Edgar Broughton Band [see overleaf].

The Fugs didn’t the survive the 1960s, and so attuned was their method to the restive nature of the times, it’s not particularly hard to understand why. Sanders and Kupferberg (who died in 2010) reunited occasionally during the ’80s and again in 1994 to present an alternative to Woodstock 2, but their rebellious themes had by then become passé. Much like Lenny Bruce, they had been a potent force in the era , and one that’s harder to understand now. As this reissue proves, however, it’s worth making the effort to do so.
Mick Houghton

Q+A ED SANDERS
How did you end up on Reprise?
We recorded an album for Atlantic in 1967 which they wound up not releasing. We did photos for a possible cover idea on the theme of The Fugs Eat It with my wife’s legs jutting up and spread out. The Village Voice printed the pictures and just after that we were dropped. So, during the glory years of the Summer Of Love we had no album out which really put a cramp on our flow.

Fugs lyrics used lot of humour. Was that your way of protest?
You have to remember that Vietnam was like a hidden drum of doom pounding at the back of all of our fun. In the middle of the party you’d know that napalm was being dropped, agent orange was being sprayed. Now I’m older, I appreciate that life is always a fun/no fun mix. We did use humour and satire a lot but we were always fervently anti-war. Don’t forget, in 1968 when those records were released, most Americans still supported the Vietnam War. They didn’t come out against it ’til after Kent State in 1970.

Did you ever go too far?
Today’s culture is much more politically correct than in our wild seed-sowing youth. We might change some lyrics now in post-women’s lib times but most of the material speaks to its era. We were randy young men who drank too much and smoked too much pot. Just the name Fugs carried a forbidden strength in the ’60s. Our name couldn’t be used on TV. It was such a climate of censorship. I mist over with sentimental complacency thinking back but, nevertheless, we were always on the edge, on the verge of getting censored or arrested.
INTERVIEW: MICK HOUGHTON