Powerful “one last shot” boxing drama. But the real action is out of the ring... 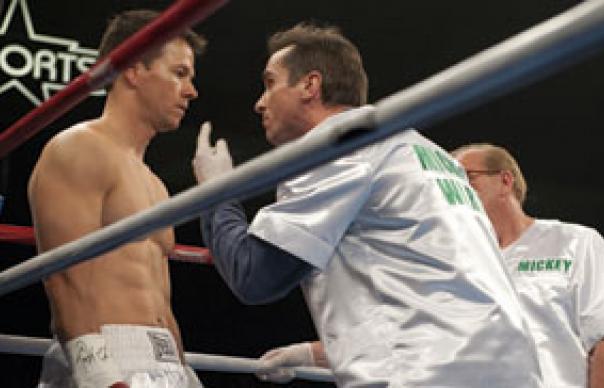 We have dozens of fight movie images already emblazoned on our memories. Robert De Niro battering his head against the wall in Raging Bull, Muhammad Ali taunting Foreman (“Is that all you got, George?”) in When We Were Kings, Rocky Balboa and Apollo Creed hitting lumps out of each other, or the sibling angst of Marlon Brando and Rod Steiger in On The Waterfront. In short, there’s no feint or storytelling combination that filmmakers haven’t already hit us with. That’s why David O Russell’s The Fighter might seem a less than enticing prospect.

Boxing movies have two essential plot lines. Either they’re redemptive fables about fighters beating the odds or they’re “I could’ve been a contender”-style stories of missed opportunities and broken dreams. Russell’s rousing new film somehow manages to be both. The film combines blue-collar realism with wish-fulfilment fantasy. Based on the true story of “Irish” Micky Ward, a former WBU Light Welterweight Champion, the film grinds audiences’ faces in squalor and sweat before delivering the mandatory upbeat finale.

The Fighter doesn’t take us anywhere we haven’t been many times before in earlier boxing pictures. However, it is directed and performed with such ferocious intensity that we hardly notice how hackneyed its storyline really is. The setting is Lowell, Massachusetts, the birthplace of Jack Kerouac. Lowell, a once important industrial town, has fallen on hard times. As the film begins, in 1993, so have Micky and his half-brother Dicky Eklund (Christian Bale). Micky is managed by his mother (Melissa Leo) and trained by Dicky, a former boxer himself who once went 10 rounds with Sugar Ray Leonard and was dubbed the “pride of Lowell”, but is now a crack addict.

Russell opens the film with Dicky sitting on a sofa, his brother beside him, talking into the camera. He is the subject of what he has deluded himself is an HBO documentary about his “comeback.” In fact, it’s a film about crack addiction in Lowell. A gaunt-faced Bale plays Dicky in the same wired and febrile way he did the insomniac in The Machinist. It’s a startling performance which seems mannered at first but which quickly draws us in. Gimlet-eyed, his arms forever waving, Dicky just can’t sit still. In older boxing movies, it’s booze, broads and crooked promoters that bring the heroes down. Here, it’s crack cocaine.

Although The Fighter was made in Lowell with the co-operation of Micky Ward’s family and boxing associates, it’s not a flattering portrayal of Ward’s background. His mother Alice is a chain-smoking, foul-mouthed harridan who dotes on Dicky but doesn’t look out for Micky at all. In the first fight we see, she and Dicky allow him in the ring with an opponent 20lbs bigger who gleefully beats him to pulp. Russell shows the bout in sadistic slow motion, with beads of sweat bouncing off Micky’s face and huge thwacks on the soundtrack each time a punch lands on him. Micky is the family breadwinner. If his brother is too strung out to coach him properly or his mother is landing him lousy fights, he has to accept it – after all, they’re “family.”

Russell has plentiful experience of depicting dysfunctional family life. In Spanking The Monkey (1994), he touched on incest between a mother and her young son. In Flirting With Disaster (1996), Ben Stiller was shown traipsing across America on a quixotic search for his birth parents. The difference about The Fighter, which he didn’t script himself, is that the family is working-class and very big indeed. There are nine sisters. They’re used like a Greek chorus and seem to travel everywhere en masse. Russell portrays them in a harsh way, rekindling memories of Martin Scorsese’s equally caustic depiction of the gangsters’ wives in GoodFellas: they’re overweight, with bad skin and dishevelled hair. One of the film’s most comic but uncomfortable scenes shows the mother and daughters forming a posse to track down Micky’s girlfriend Charlene (Amy Adams), a fiery barmaid. They’re furious with her for luring Micky away from them. At this point, the film comes very close to caricature. It’s as if we’re watching an episode of The Jerry Springer Show.

Thankfully, the filmmakers have a residual affection for these characters that transcends the occasional moments of mockery. Russell portrays the world of the gym with the same attention to nuance that you find in the best documentaries about boxing. Whether it’s their banter or the way the fighters spar or their pre-fight routines, he is always looking for the telling detail. (The depicting of the gym isn’t so different from Frederick Wiseman’s recent doc Boxing Gym, which showed the sport pulling a community together.)

Early on in the movie, Micky and his family seem like deadbeats. Micky as played by Mark Wahlberg is the blue-collar everyman: decent, loyal and going nowhere. Midway through the film, when Dicky is hauled off to prison and Micky himself is badly beaten up by the cops, the storytelling style changes. A study in masochism and self-destruction is somehow transformed into an uplifting tale. The family fall into rank behind Micky, who becomes a genuine contender again.

Wahlberg produced the movie, performed his own stunts and reportedly spent four years getting in trim for the role (and waiting for the financing to come together). He looks a plausible enough fighter. The irony is that this isn’t really his film at all. He may be the hero but Wahlberg’s Micky can’t help but be upstaged. What makes this film special is Bale’s febrile, near psychopathic turn as Dicky, Melissa Leo’s portrayal of the mom as a working-class Clytemnestra, Amy Adams’ brawling barmaid, Russell’s jagged, nervously energetic directorial style and the vivid turns from the character actors. Salty, expletive-filled dialogue helps too.

The boxing is ultimately far less interesting than the subculture around it. To emphasise the point, Russell keeps the fight sequences relatively brief. During the bouts, he’s as interested in the reactions of the family as he is in the boxers. He hones in on Bale following a fight on a prison phone, the sisters watching on TV and Amy Adams ringside with a mix of concern and bloodlust in her eyes. What he understands is that the family dynamics are infinitely more complex and dramatic than even the most ferocious combinations and body shots that even Irish Micky can unleash.

The Fighter proves that the boxing movie still has life. It also underlines just what a distinctive actor Bale has become. Russell throws in footage of the real Dicky Eklund over the closing credits, and he’s every bit as livewire, fidgety and frighteningly intense as the man Bale portrays so powerfully.
GEOFFREY MACNAB