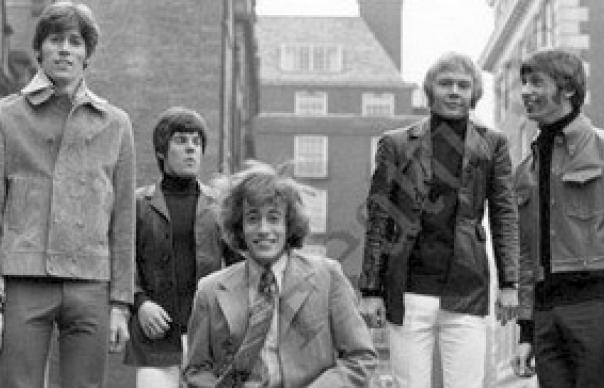 The 45-year odyssey of the Brothers Gibb — a crazy zigzag whisking them from floundering unknowns in Brisbane to international superstars twice — ranks with the Beach Boys’ saga for family melodrama and rock transmogrification. Nowadays, it is their disco years that are routinely privileged. But the enduring success of Saturday Night Fever has tended to obscure an exquisite early body of work that caught the spirit of its times like precious few others.

The six-disc Studio Albums 1967-1968 brings that material into sharp focus. With mono/stereo versions of their first three albums (1st, Horizontal and Idea) and three more CDs of outtakes, alternates, and lost singles, it contends that the Bee Gees Mark One (brothers Barry, Robin, and Maurice Gibb, guitarist Vince Melourney, drummer Colin Petersen) were a a studio juggernaut to challenge The Beatles and Phil Spector.

Their opening trilogy can even be seen as the culmination of myriad styles percolating in the late ’60s: Beatlesque impressions, baroque balladry, whimsical psychedelia, R&B. Bee Gees 1st, an audacious debut, didn’t so much imitate Revolver as expand upon its ambitions, incorporating driving rockers, Gregorian chants, and devastating, near-symphonic motifs.

Already, the Gibbs seemed to be dragging the pop song into ever-more grandiose and ornate environs. If the melodies seemed chirpy and effusive, wistful melancholy always lurked just beneath the surface.
Horizontal and Idea were solid follow-ups, though the treacly ballads detract from the band’s cosmopolitan strengths. For all their hits on perpetual oldies rotation – “Massachusetts,” “I’ve Gotta Get A Message to You,” “Words,” “To Love Somebody” – it’s the group’s less-celebrated excursions into psychedelia and hard-rock that will
astonish the sceptics.

A good case in point is “Harry Braff”, a daft racecar-driver sketch heard best in the alternate version. With a lethal hook, spinetingling harmonies, droning guitar, and pulsating bass, it was perhaps too ambitious; emblematic of a very young, abundantly talented group bursting with an artistic potential that, as it turned out, they would only partially realise.