Spellbinding restoration of the Gibb masterpiece 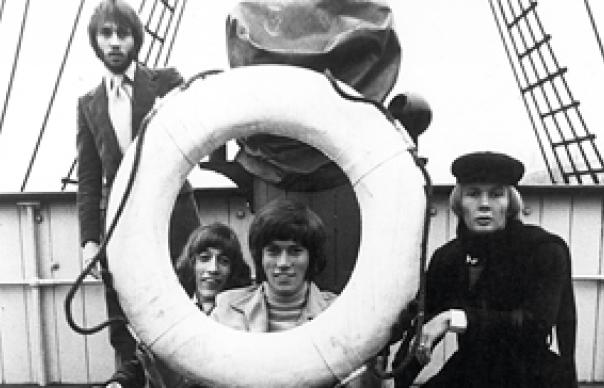 With its opulent cover –“Bee Gees Odessa” stamped in gold into its fuzzy velour – the Australian-bred pop quartet’s fourth announced itself as one of the last major statements of ’60s rock. A double album, brimming with shimmering orchestral texture and gorgeous melodies, Odessa nonetheless was doomed to be misunderstood from the get-go.

Not least by the Gibb brothers themselves, whose group was on the verge of splintering, and who later derided producer Robert Stigwood for (allegedly) browbeating them into such a grandiose venture. The record-buying public, too, hooked on sugary Gibb singles like “I Started A Joke” and “Words” were flummoxed – chart action was disappointing. The critics simply wrote them off as lightweights, or worse.

But as the years sail by, the fearless ambition of Odessa becomes more difficult to dismiss. Like sonic landmarks with similar histories – Pet Sounds, Forever Changes – Odessa finds its authors amid personal crisis, yet working at the absolute peak of their powers. Capping a furious two-year whirlwind in which the group produced four albums and half-a-dozen Top 40 singles, arguments over Odessa’s birth, coupled with an exhausting schedule, would create a battle between Barry and Robin Gibb for leadership of the group. Though they finally reconvened in 1971, they never again produced a work as focused and affecting as Odessa.

Few realised, when Odessa appeared in early ’69, that The Bee Gees had been making records since ’62. Their career trajectory in Brisbane roughly paralleled that of The Beatles and other beat groups, though their teenaged moon/June/swoon confections lacked the swagger and grit of those bands. In 1966, Fabs comparisons were bolstered when the brothers moved to London and signed with Brian Epstein protégé Robert Stigwood, churning out irresistibly catchy 45s like “Massachusetts” and “Gotta Get A Message to You”. Still, for all the group’s success, little in their teenybop-oriented CVs pointed to a kind of White Album-style magnum opus.

Odessa’s songwriting – credited democratically, although Barry Gibb was the driving force – is leaps and bounds beyond the group’s simplistic early (and later) fare. The title track is the stunner. Flamenco guitar calmly leads us into the shipwreck tale of the British carrier, Veronica – a devastating vision of both personal and collective loss. With its other-worldly crescendo of wailing voices, anchored by choppy acoustic and mournful cello, “Odessa” is a musical and lyrical tour de force.

Though much of the rest of Odessa is not quite as daring, tracks like Robin’s signature love song, “Lamplight”, and the emotionally wounded “You’ll Never See My Face Again” exploit industrial- strength pathos, an appropriate tone circa 1968. Two of the more surprising cuts –“Marley Purt Drive” and “Give Your Best” – are unlikely country hoedowns, signs that The Bee Gees, like everyone else, were listening to The Band, Bob Dylan and The Byrds.

Still, Odessa’s elegant tension springs from interlacing the group’s skeletal acoustic framework with Bill Shepherd’s spectral string arrangements and dramatic orchestration. Shepherd, who had worked with Joe Meek, provides sonic density and an empathic counterpoint to the brothers’ peerless singing. “Melody Fair”, for instance, perhaps the most fetching cut in The Bee Gees’ entire catalogue, glides on a subtle but sweeping string arrangement intertwined with cascading vocals, while “Black Diamond”, melodramatically echoing the loneliness and isolation of “Odessa” achieves a chiming, celestial apogee.

From the Zombies-like “First Of May” to Maurice Gibb’s hymn to new love, “Suddenly”, the group returns to a simple-but-effective formula: tremulous vocal intro accompanied only by guitar or piano, which upon reaching chorus, dissolves into a soaring flurry of hooks, merry-go-round harmonies, and Shepherd’s stately orchestral flourishes. Ornate and fanciful, yet emotionally direct, pop has seldom retraced this territory.

Not long after Odessa’s release, The Bee Gees hit the skids: 19-year-old Robin, who’d pushed for “Lamplight” to be the first single (and it’s hard to argue with that judgment), split for a solo effort (the seldom-heard Robin’s Reign). The others soldiered on for 1970’s middling Cucumber Castle before rifts were mended for 1971’s 2 Years On. By 1975, teamed with R&B producer Arif Mardin and flashing a newly minted Philly soul strut, The Bee Gees were disco icons on their way to the watershed Saturday Night Fever. But that’s another story.

For this one, this edition’s third disc (disc two is the original mono mix in full) captures the spirit of Odessa’s creation, affording a fly-on-the-wall glimpse at the sessions in progress. Only two true outtakes are included here (“Pity” and “Nobody’s Someone”) but in among the scratch vocals and rough sketches are moments of offhand beauty: especially, an embryonic, stripped-down version of “Melody Fair” and a stunning alternate “Odessa”, key elements of its narrative altered.

Did the late-’60s Bee Gees feel limited creatively by their success?

Any song freshly written is also experimental as thoughts, words, and harmonies come together to create something new. Once you’re experimenting on the frontiers of music you are out there on your own anyway. The late ’60s was a much more experimental and liberal period music-wise than it is now. We never felt limitations when we were songwriting, and neither were we limited by the style of our hits.

Early Bee Gees’ songs brim with hope and melody, yet there’s an undercurrent of melancholy as well, especially on Odessa.

Life is hope and life is melancholy. These things don’t change. They are part of human nature. However, we were always great observers and I suppose, like poets, we were able to put into sounds and words the emotions of love and lost love around us.