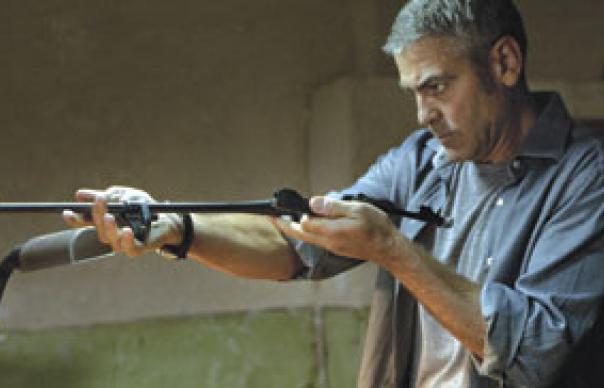 You can understand, in the wake of the Bourne trinity, why The American is being marketed as an action-packed Euro-thriller full of big guns, breathless chases and attractive exponents of espionage. Those expecting gung-ho kills and spills, however, may be frustrated.

Anton Corbijn’s second film is rather a meditation on the genre, an elegiac musing on the role of the lone, ageing assassin. Like Melville’s Le Samourai, it focuses on a ruthless, now wearying man of cold blood and stern rituals whose Achilles heel is a yen for intimacy and connection. It’s a study of a battered soul wondering if redemption might be worth a shot after all. And so, in the film’s ellipses and longueurs during what is – despite this approach – a completely riveting noir plot, Corbijn comes up with something closer in spirit to Antonioni (especially The Passenger) and Jarmusch’s The Limits Of Control than any adrenalised blockbuster. The cinematography, is, unsurprisingly, beautifully evocative, and Clooney gives a performance of impeccable restraint and hushed charisma as a jaded, jaundiced Jackal.

We’re introduced to Clooney’s Jack – his name may really be Edward, or something else entirely, it transpires – in snowy Sweden. (To all intents and purposes, he’s a man with no name, though in a later twist the phrase “Mr Butterfly” causes flutters.) As Clooney sets his pace for the movie by being somehow at the same time static and twitchy, solid yet paranoid, there’s an almighty early switch-around which pulls the rug from under our feet. It sends Jack hurrying to the Italian countryside. He holes up – by order – in a small town. At first it looks idyllic, but Jack is not the trusting type and keeps his eyes and ears open. The location’s winding alleys, crooked steps and dark corners acquire the understated eeriness of Venice in Roeg’s Don’t Look Now or Genova in Michael Winterbottom’s film of the same name.

He’s befriended by the local priest Father Benedetto (Paolo Bonacelli). He keeps him at arm’s length – “I’m not good with machines,” he lies – but warms to discussions of faith and religion with the old man. “I don’t think God is very interested in me,” he protests, as far as his taciturn demeanour will allow him. He kills time with reading and exercises. There is a whispered hint of De Niro’s Max Cady in Scorsese’s Cape Fear as Jack’s tattooed frame engages in near-manic press-ups and pull-ups. Yet he is an infinitely more enclosed, withdrawn, character. “You’re American,” smiles the priest, “You think you can escape.”

Then the call comes. “Consider it your last job. You don’t even have to pull the trigger.” Jack – good with machines – painstakingly constructs the perfect weapon for the mysterious Mathilde (Thekla Reuten). He and Mathilde undergo cryptic, coded rendezvous, the woman changing her appearance at each meeting, Jack remaining stoical as he trains her. He just wants to get the job done, and professional pride accrued over years means he’ll do it well. But fault-lines are appearing in his armour. And it’s as if a part of him is willing them to crack.

He begins a liaison with a prostitute, Clara (Violante Placido) at the local brothel. After the kind of sex scenes which Hollywood would not encourage of Clooney but with which European arthouse is perpetually at ease, this blooms into full-blown romance. The pair finds a fleeting moment of paradise, which Corbijn is no slouch in representing. Jack knows he shouldn’t be putting himself at risk by opening up, but craves a bond, an identity. One of the last briefs he was given was: “Remember – no-one gets close to you. You used to know that.” He’s losing his edge. And he’s being followed by people who really are out to get him: he’s made a lot of enemies over time. Soon, much as Jack wants to trust Clara and believe there’s a way out of his profession, he realises there’s a fight in store. Which is when, as a dénouement, we do get a flurry of chases and shoot-outs.

The American is not a film which explains everything. That’s half the beauty of it. We have to work to find where Jack’s coming from, where he wants to go. The screenplay by Rowan Joffe (it’s based on Martin Booth’s novel A Very Private Gentleman) creates dialogue that’s as sparse as the photography is, for all its muted colours, sumptuous. Fans of Corbijn’s music-industry photography will relish his knack of rendering the vague as iconic, the indistinct as symbolic. His is an aesthetic of loneliness and moodscapes. Control, his debut feature, caught the essence of Ian Curtis through a monochrome, matter-of-fact technique. Here, by contrast, he takes the thriller genre and – far from proving a safe pair of hands – elevates it to the level of poetry. It’s often as existentially pensive as Wim Wenders celebrated Wings Of Desire, or Hammett.

As for Clooney, who’s on a rightly lauded roll, he again shows that leading-man status can be triumphantly finessed into challenging, ambiguous roles in non-mainstream areas. He may have parked the grin before (in Solaris and Michael Clayton), and in Up In The Air he picked at the threads of midlife crisis. He’s never dug so deep as he does here, suppressing the charm he’s known for and offering a portrait of an anti-hero drowning in guilt and gasping for change. One long silent scene where he assembles a gun from its component parts, for instance, is inexplicably compelling. Ably flanked by the two lesser-known, luminous leading females, this quiet American is the still centre of a film that offers a compelling take on an old genre.
CHRIS ROBERTS