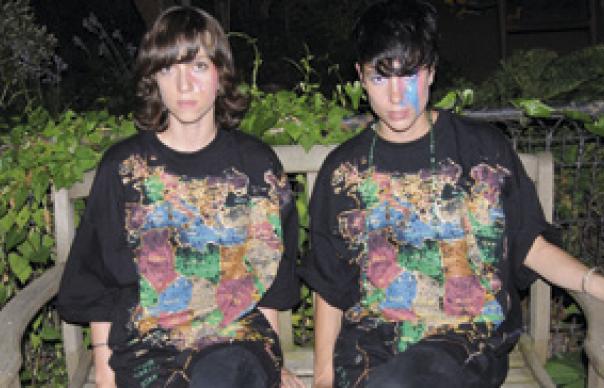 Just when you thought New York’s stock of exotically plumed indie had been exhausted following albums by high-profile misfits Gang Gang Dance and Animal Collective, here comes one of that freak-scene’s most enchanting new records, Dance Mother by Telepathe.

Pronounced “telepathy”, Telepathe are Busy Gangnes and Melissa Livaudais, two fresh-faced girls from Brooklyn who dress like Klaxons’ witchy sisters and who, last winter, aroused hipsters everywhere with the treacly twirl of “Chromes On It”, which painted them as a kind of ghetto Cocteau Twins.

Surprisingly, that song turns out to be one of the clunkier numbers on Dance Mother, which, cosmetically at least, taps an idea of world music – the ethnic chants and rhythms, the general sketchiness – previously explored by the likes of Yeasayer and Gang Gang Dance. While it’s hard to say exactly how much influence David Sitek of TV On The Radio has had on Telepathe’s development – he’s the record’s producer, in whose studio it was made – his warm, gauzy sound and fondness for melody is all over the album.

Shades of Telepathe’s past as a feel-good drone outfit still linger, and are blended, on the primitive machine-pop of “Drugged” and “Devil Trident”, with the girls’ swooning harmonies and cascading synths. The way Sitek appears to have moulded Telepathe, it would be tempting to label them Brooklyn’s answer to Phil Spector and the Ronettes.

A little may go a long way with Telepathe, but there’s enough variety here to reward repeated listening. From opener “So Fine”‘s sturdy electro to the strangely moving “In Your Line”, which could be a Prince slow jam from the mid-’90s, it’s clear that, despite their often listless delivery of a lot of arcane lyrics, Gangnes and Livaudais can be pretty persuasive performers. At times, with sci-fi jigs like “Lights Go Down” and “Michael”, Telepathe seem to stake out new ground between, say, Bat For Lashes and Hot Chip. Whichever way they’re going, Telepathe are heading in the right direction.