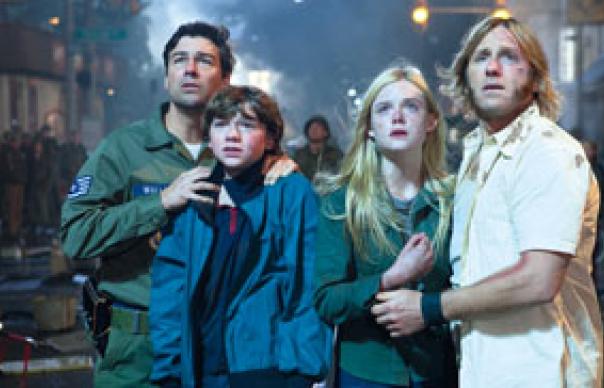 When he was young, JJ Abrams used to write fan letters to Steven Spielberg. Now he’s a fully-fledged mogul of his own, with shows like Alias and Lost and movies including Mission: Impossible III and Star Trek under his belt… well, on the strength of this, it seems he’s still writing them. Having been tipped as “the new Spielberg” for much of his career, it seems Abrams has decided he’d rather be the old Spielberg.

Spielberg also produced Super 8, and his imprint is obvious from the moment the “Elliot and ET on a BMX” Amblin Entertainment logo rolls across the credits. This is set in 1979, three years earlier than ET, and it’s a superficially similar tale of an alien trying to go home, nasty government officials trying to catch it, and BMX-riding smalltown kids trying to help it. Though you could also detect echoes of Close Encounters Of The Third Kind and even The Goonies in Super 8.

One differentiating factor is that these kids are amateur filmmakers, which gives Abrams a chance to revel in the parts of his own childhood that didn’t involve watching Spielberg movies. Abrams’ stand-in behind the camera is Charles (Riley Griffiths), a burly young-Orson Welles type shooting a amateur zombie movie (on Super 8, of course) with his outcast school-mates. But the real hero – the Elliot of the piece, if you like – is Joe (Joel Courtney), the sensitive model maker and make-up guy, who recently lost his mother, and whose dad, conveniently, is a local cop. Completing the equation is Elle Fanning as Alice, the mature-beyond-her-years high school bombshell and the zombie film’s lead actress. Conveniently, she’s also a motherless child, and her dad is the local white trash alcoholic. When this juvenile film crew accidentally witnesses, and records, a freak train crash during a clandestine midnight shoot, they’re in on a secret the military spends the rest of the film trying to cover up and the grown-ups won’t listen to them about, though it takes them, and us (and the alien, for that matter), some time to put all the pieces together.

Abrams revels in the pop-culture paraphernalia of his youth: the posters of space shuttles, the board games under the bed, the action figures and cassette players, and the days when you had to take your Super 8 reels to the developers on main street, where the long-haired teen behind the counter would ask who your elder sister was dating. In this way, the movie taps into a deeper vein of big screen Americana that stretches back to 1950s sci-fi movies like Invasion Of The Bodysnatchers and It Came From Outer Space. There’s an agreeably vintage feel to the unfolding mystery, with its disappearing townsfolk and pet dogs and engine parts, but Abrams’ technical knowhow gives it a 21st century sheen. The train crash itself is bracingly effective – a mini industrial symphony of clanging metal and flying machinery – the alien itself is sparingly used but convincingly rendered, and Abrams’ characteristic lens flares run through the visuals like a watermark.

The pitfalls of Super 8 you could also blame on Spielberg. Abrams does a good job of emulating his master’s naturalistic observations of youth, and some of the best scenes simply involve the kids bantering among themselves. But as the film grinds to a predictable finale, the intimacy becomes swamped by special effects and panicked running about. Worse still, there’s a double-cheese dose of parent-child reconciliation that would give even Spielberg indigestion.

Super 8 deserves credit from the outset for being an original, entertaining, solidly built movie with no star faces and plenty of heart – especially when this year feels more stuffed than usual with remakes, reboots, superheroes and sequels. The commercial stakes are now so high, nobody in Hollywood seems ready to risk making a special effects movie based on old-fashioned storytelling rather than brand recognition. That’s left a Spielberg-shaped hole in the summer schedule, which Abrams fills a little too obligingly. Ironically, one of Super 8’s big themes is about “letting go” of the past – let’s hope Abrams has learned his own lesson.
Steve Rose