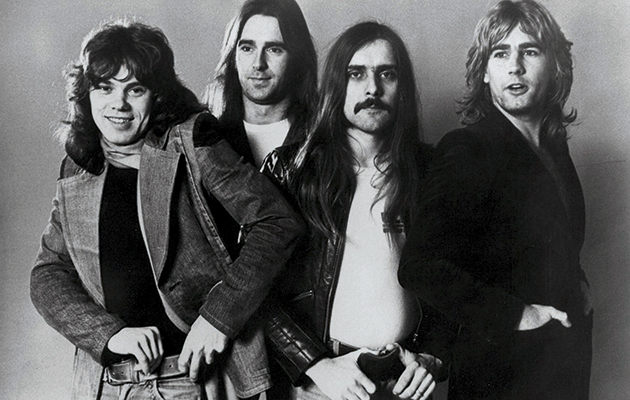 In December this year, Status Quo will cease to exist as an electric band. Once they finish their 2016 touring commitments, Francis Rossi and Rick Parfitt will pack away their Telecasters and bring down the curtain on half a century of Quo rock’n’roll. No more Frantic Four reunions. No more heads-down boogie. No more pounding out the riffs of “Big Fat Mama”, “Little Lady” and the 180bpm speedrush of “Down Down”. Today’s public may view them as veteran light entertainers, but Quo’s setlist, for 67-year-old guitarists, is one of rock’s most punishing assault courses. And Parfitt’s already had three major heart scares.

While Quo fans wait to see if Parfitt and Rossi might re-emerge in future for acoustic shows – their 2014 album Aquostic (Stripped Bare) featured the famous hits performed on mandolins and accordions – UMC release another trio of 1970s Quo albums in 2CD expanded editions, following last December’s initial batch (Hello!, Quo, Rockin’ All Over The World). As before, all three contain previously unreleased tracks and, as before, all three tell very different stories. On The Level (1975) sailed to Number One on a wave of confidence and popular appeal. If You Can’t Stand The Heat… (1978) alienated the fanbase with a controversial, hi-tech production. Whatever You Want (1979) got the fans back on-side with a superb title track and a re-establishment of Quo priorities. So much euphoria, angst and rebirth in four short years. So little margin for error.

Appearing a month after its advance single, “Down Down”, topped the UK singles chart, On The Level was the follow-up to Quo (1974), a hard-boiled, heavy album on which bassist Alan Lancaster had been the dominant singer. On The Level saw the softer-voiced Rossi reassert himself as lead vocalist, but it was Parfitt’s “Little Lady”, opening the album like a bat out of hell, that laid down the mission statement. There was a girl walking down a street, there was a blizzard of guitars and that was pretty much it. But the song’s structure was quintessential Quo: start rocking, keep rocking, don’t stop rocking, drop down to a quiet bit, build it up again, louder, louder, and then – this was the key moment – resume rocking with absolutely ferocious intensity. Rossi’s songs (“Most Of The Time”, “What To Do”), tended to be lighter, more country-ish, presenting Quo as the crossover act they would later become, a denim-rock phenomenon with the melodic hooks to catch the ear of every generation.

Music critics despaired of them (“a poor man’s Canned Heat” – NME), but Quo were a band, like Creedence Clearwater Revival, who had more skill than outsiders imagined. Quo’s job often looked easy, even facile, but no other configuration of people could have clicked with the same chemistry. Audiences could sense it; Quo would feed off it. The second disc of On The Level has a pulverising “Roadhouse Blues” from Glasgow Apollo, 12 minutes long but not an ounce of flab in it, with Rossi working the crowd like Steve Marriott at a Humble Pie gig. There’s 26 minutes, too, from a show in Mainz, Germany – a mono recording, alas, though not as lo-fi as the unlistenable Paris bootleg on the reissue of Quo – providing further evidence of how the Frantic Four crossed the language barrier. They did it by adhering to the time-honoured curriculum of the three Rs. Rock. Roll. Rock’n’roll.

Attracting fans from eight to 48, Quo were never troubled by the rude uprising of punk in 1976-7 (they were faster than many punk bands, for one thing), but other reproaches did annoy them. Their lack of airplay on American radio became an unfortunate obsession. For Quo in the era of Hotel California and Rumours, the US was a tantalising territory as yet unrocked. But when they did something about it, their fans reacted like football supporters whose half-time pies have been swapped for crab vol au vents. Rockin’ All Over The World (1977) introduced a new type of Quo production: textured, cushioned and toned down. However, If You Can’t Stand The Heat… (1978) was an even more comprehensive makeover. The songs were submerged in keyboards, horns and female backing singers. One of the first instruments heard on the album was a synthesiser. As Quo de-Quo-ified their music in an effort to woo new suitors, “Again And Again” at least resembled a familiar boogie. But “Accident Prone”, co-written by their producer Pip Williams, made a virtue of a disco hi-hat and the whole point of Quo – their raison de wossname, as Rossi would have put it – was that their songs were a different kind of floorshaker.

Williams was retained for Whatever You Want (and went on to produce eight Quo albums in all), but the horns and the girls weren’t invited back, which allowed Rossi’s and Parfitt’s guitars to take up their rightful positions again at the forefront of the mix. The intro of “Whatever You Want”, their best single since “Rain” in 1976, seemed to last forever, enjoying its rediscovery of ancient Quo rituals, while “Breaking Away”, the six-minute closing track, became an epic of self-validation as first Rossi, then Parfitt, sang of life in the belly of Quo (“Hot wax, jacked-up on the television… skin me another and pass along the whiskey and coke”). The song moved into a dreamy middle section, and then into a viciously fast shuffle just like the old days. It felt like something akin to an atonement.

All the same, the bonus disc of Whatever You Want includes eight tracks from what’s ominously described as an ‘American remix’ of the album, US-released in 1980 under a new title (Now Hear This). The remix, needless to say, made no more impact on American radio than Quo’s own self-produced albums Piledriver, Hello! and On The Level. Whatever they had, whatever Britain and Europe couldn’t get enough of, America simply didn’t want it. To this day, Quo’s only US Top 40 hit is “Pictures Of Matchstick Men”, all those years ago in 1968. Ironically, it’s one of their most English-sounding songs ever.