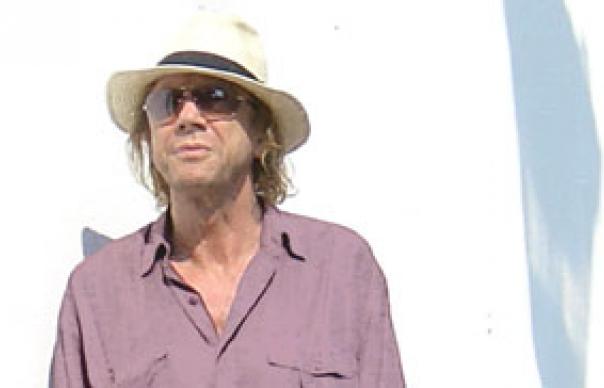 While we understand its many megalomaniacs, we’re often less certain what to make of rock’s recluses. In a field so characterized by extremity, it’s difficult to know what to think of those who simply refuse to court infamy. Was Bob Dylan ever harder to fathom than when shopping for groceries in Woodstock? What to make of Syd Barrett, quietly and unpsychedelically existing in Cambridge? In many respects, the decision to simply step out of one’s place in the world often seems to be the oddest, and most fascinating route a musician can take.

The journey mapped out by this excellent survey of Kevin Ayers‘ solo work is one which is framed, significantly, by two such departures. The first was his exit from Soft Machine, following a hectic US tour with the Jimi Hendrix Experience in 1968. Then, disillusioned with the band’s “pseudo jazz”, he sold his bass guitar and began composing the reflective, lyrical, and often very funny songs collected here. In 1980, after failing to find anything more than a niche for them, Ayers moved to Spain, but for infrequent new recordings effectively quitting a business that had singly failed to find a place for him.

As this set amply illustrates, however, it was not for want of trying, and his achievements were unique, and anything but small. From the warm, reflective progressive pop of his first albums (represented here by the likes of “Girl On A Swing”, and “Soon Soon Soon”), through different labels (from Harvest to Island, and back), more overtly commercial productions, even a brief, hugely weird spell when he shared management with Elton John and was marketed as a pretty pop star, in the eleven years before his self-imposed exile, Ayers tried different approaches, all the while remaining a square peg ill-shaped for any large market.

Perhaps it’s not hard to see why. A tendency to public school silliness (a mild obsession with bananas, which endures for a good six years) is certainly present here. Likewise, so is the kind of persona which must have sounded oddly colonial at the time these records were released. A plummy approximation of Nick Drake and Noel Coward, the Ayers of these songs is a café-dwelling roué, keen on girls, who casts a satirical eye over the times, while enthusiastically lapping up what they have to offer. In an earlier generation, you can imagine Ayers of “Stranger In Blue Suede Shoes” (“He offered me some second class food…“) shooting tigers, stiff drink at his side. As it is, this collection seems to bear out the idea that if you devote yourself so wholeheartedly to wine and women, song will undoubtedly follow.

All of which, if artlessly done, would render Ayers more Monty Python sketch than musician. As it is, as a songwriter, he proves to be a wolf in slightly pissed sheep’s clothing. It’s something made plain here with two songs pertaining to his friend, Syd Barrett. “O Wot A Dream!” a delightful tale of his first meeting with Barrett (who offers him his last sandwich), not only captures the fundamentals of Barrett’s composition, but also a sense of his sense of wonder at the world. A take of “Religious Experience”, meanwhile, a joyful three chord mantra features Barrett on guitar, but also exists in an alternate take where Ayers apes the fractured style of his then-indisposed friend. They’re both textbook cases of how finely-drawn his songs can be.

Indeed, throughout the collection, there’s a growing sense that Ayers’ loafing toff persona is a massive asset, as a sweetener for his more bitter pills. Live, it’s hilarious (Ayers begins disc 4, a previously unreleased live set from London’s QEH in 1973 by announcing, “We’re going to play a piece of music I can only describe as marvellous…”). On the very best music here, meanwhile, the devastating coupling of “Whatevershebringswesing” (from the 1971 LP of the same name) and “Decadence” (inspired by Nico, from 1973’s Bananamour), there’s simply a lot more going on.

An eight minute piece of the kind of warm, expansive music that you imagine being made equally by Pink Floyd or Brian Eno, the former track finds Ayers’ vocal intoning a familiar mantra: “Let’s drink some wine/And have a good time…”. Now, though, the party mood has self-evidently vanished, and both Robert Wyatt‘s ghostly backing vocals and the devastating guitar playing of Mike Oldfield turn the song into a sad, soulful epic.

His contemporaries in the progressive era may have been more complex, or louder, or more successful. The Kevin Ayers collected in Songs For Insane Times, however, advances things pretty much by sheer uniqueness of personality alone. “I don’t have any particular goal,” Ayers said, when he returned from obscurity last year. Still, unfazed by external pressures, his music is proof that to devote yourself entirely to frivolity is, in spite of everything, an extremely serious business.