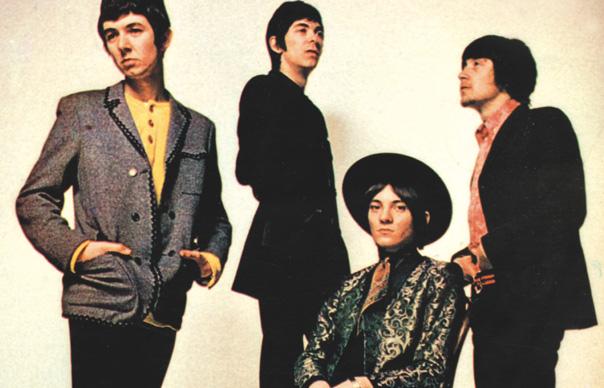 Never mind that hoary hypothetical debate about how much greater Sergeant Pepper’s might have been had “Penny Lane” and “Strawberry Fields Forever” made the cut. Consider for a moment Ogdens’ Nut Gone Flake with The Small Faces’s masterful non-album singles “Itchycoo Park” and “Tin Soldier” stirred into an already potent mix. Comparisons between the two albums are hardly fanciful. Both have conceptual aspirations, although Stan’s search for the moon on Ogdens’ is far more fun than the Fabs’ thin tale of Billy Shears’ troupers. And just as Sergeant Pepper’s dominated the summer of ’67, so The Small Faces’ fourth album bestrode the hottest days of 1968, anchored at number one for six weeks.

Almost 45 years later, Ogdens’ has undergone a major structural upgrade. Alongside the band’s other three albums – Small Faces (1966), From The Beginning (1967) and Small Faces (1967) – it now comes in both mono and stereo formats, remastered and fleshed out with unreleased alternate mixes, instrumental versions and early backing tracks. Though the archives have been scoured, few treasures have been unearthed. In the case of the Ogdens’ sessions, legendary lost takes of The Ronettes’ “Be My Baby” and “(If You’re Feeling) Groovy”, written for PP Arnold, have failed to rematerialise. The most obvious new nugget is the unreleased “Kamikhazi”, a neat instrumental soul groove with a liquid guitar riff, but the remainder are pleasing footnotes, of historical value rather than compelling musical interest.

No matter. Remastered to give everything added depth and width, the original album is more than enough. The trippy title track serves as a brief tasting course, previewing the dominant musical themes: dense rhythm, psychedelic excursions, orchestral flourishes and what might be called heavy soul. “Afterglow (Of Your Love)” is bursting with the latter. Underpinned by swirling organ and Kenney Jones’s immense drums, it almost buckles under the weight of its own momentum.

Ian McLagan’s “Long Agos And Worlds Apart”, a slight slice of whimsy, sounds undernourished by comparison, but “Rene” is far more robust. The story of a good time girl, it’s all winks and jutting elbows, so finely sketched you can see the stevedores and shore-leavers lining up in the warehouse to sample Rene’s wares. In common with “Lazy Sunday” and “HappyDayToyTown”, the album’s other music-hall numbers, its cartoon naughtiness belies the enormous inventiveness of the music, lyrics and production.

Beneath the sauce, Ogdens’ is a deceptively soulful, searching record. The voguish surrealism and theatricality is plugged into earthy humanity. Ronnie Lane’s “Song Of A Baker” finds spiritual reward in simple pleasures. This, too, is the message behind the conceptual second half, telling the tale of everyman Stan’s quest to find the “missing” half of the moon.

Comic word-mangler Stanley Unwin weaves between the tracks, dispensing his idiot-savant wisdom. “Happiness Stan” begins as a formal introduction to our hero, all harpsichord, clipped choral vocals and mock-classical trills, before easing into a churning groove which carries over to “Rollin’ Over”, a hard-edged blues-rocker in which Stan promises to “tell everyone that I’m going to find it”. “The Hungry Intruder” is A Quick One-era Who trysting with English-country-garden Beatles, and finds Stan sharing his pie with a super-fly who later transports him – via the phased lunacy of “The Journey” – to Mad John, a bewhiskered cockney renunciant hiding in the woods. Who needs realism? Immortalised in a heavy folk waltz with more than a touch of Spinal Tap around the edges, John reveals to Stan the secret of the moon (it’s there all the time: sometimes you see it, sometimes you can’t), a mantra which doubles as a metaphor for happiness itself.

This affirming message is hammered home by the raucously upbeat “HappyDayToyTown”, wrapping up The Small Faces’s first – and last, sadly – great achievement as an album band. Tarted up to accentuate its enduring charms, Ogdens’ feels more than ever like a profound, silly, unique and hugely accomplished work, strong medicine for the head, heart and humerus.
Graeme Thomson

Q&A
KENNEY JONES
How did the Stan concept come about?
Andrew Oldham sent us off to write songs in these boats on the Thames, near Windsor. We caused havoc on the water, smashing into things, but we had a good old laugh. At the end of the weekend we were sitting by the campfire and someone looked up and saw half of the moon. And that was it. The idea was born, we went off and worked on it. It was very natural. Steve was the Artful Dodger in Oliver! so he had that theatrical side anyway, and we all loved Stanley Unwin. Though our first choice was Spike Milligan!

Did working on these reissues bring back memories?
I have fantastically fond memories, very emotional ones. It was the greatest band I was ever in. We could have done so much more but we just couldn’t overcome our problems.

Presumably some outtakes are still lost?
The tapes have been stolen. It’s not our fault, we’re very upset about it. We searched the world and found a lot of stuff in the archives, and we’ve added a lot. We’ve fixed the tinniness, and pulled Ronnie’s bass out more. You realise just what a great player he was, and how melodic.
INTERVIEW: GRAEME THOMSON