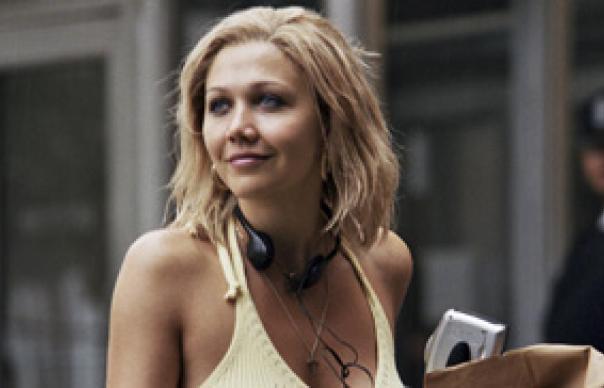 After three years in jail for robbery as a teenage junkie, Sherry Swanson (Gyllenhaal) struggles to re-engage with the outside world. She aims to stay clean and sober, get a job, get laid, and above all bond with the daughter she left in the care of her brother’s family. It’s not going to be easy.


IT’S been clear since 2002’s Secretary that Gyllenhaal is due a great showcase of a role. She’s supported in high-profile movies like World Trade Center and Adaptation and played the girlfriend in a Will Ferrell vehicle, but merits something tapping into her unique mix of innate good humour and wired vulnerability, of brassy front and fragile fault-lines. This is that role, being chiefly a one-woman show, and a complex, screwed-up woman at that. She was justly Golden Globe nominated.
If the film doesn’t quite deliver on early promise, stumbling on an honourable refusal to tie things up in a pat redemptive resolution, Gyllenhaal rides the emotional turbulence for all she’s worth, going places blonder marquee names wouldn’t (and making her brother’s work seem one-dimensional). The parallel is Diane Keaton breaking her own wholesome mould in Looking For Mr Goodbar. Gyllenhaal is likewise very much of her era, and mercurial when granted free rein. Director Collyer, following up debut Nuyorican Dream, is evidently in awe of her, and is mostly right to be so. Although one wishes she’d known how to close up the “climax”.

From the opening, Sherry’s a challenge. Giddy-headed, sluttily dressed, she has no idea how to sensibly “fit in” with society. “Here I was thinking prison was the worst, that this was gonna be some kind of heaven,” she says. “But it ain’t…” She moves into a halfway house, feuds with other parolees, has sex with the governor. She lands a job, getting the work with kids she prefers by, again, trading sexual favours. Her priority is to regain custody of daughter Alexis. The kid is now settled with Sherry’s brother Bobby (Henke) and his wife, who correctly doubt Sherry’s ability to stay on the straight and narrow. This frustrates Sherry, who grows more petulant and irresponsible, sliding back towards the allure of intoxicants. A sketchy relationship with the weathered Dean (Robert Rodriguez regular Danny Trejo) eases her pain, but not enough. The drugs take hold again, and Sherry’s brother faces tough decisions. As does her parole officer. As does Sherry, if she could but focus on reality for more than a minute.

The film’s about those living on the margins, not the glamorous, artistically-inclined bohemians of much movie lore but those commonly dismissed as drab white trash, scratching and scraping to survive. The ex-con going straight theme has been explored before, notably in Uli Grosbard’s gruelling 1977 film Straight Time, which became as much a vehicle for Dustin Hoffman as this is for Gyllenhaal, and more recently in last year’s bleak but perceptive Australian piece Little Fish, which saw Cate Blanchett as another ex-junkie picking a passive-aggressive fight with society. Although Blanchett’s subtlety was admirable, Gyllenhaal arguably takes her character further. Her eyes reveal how the inner child dominates the wannabe adult. Her idealised notion of motherhood is as far from the truth as ice cream is from diapers, and when her own father appears, her regression to an infant seeking approval is equal parts pathetic and alarming.

There’s a strong suggestion that Sherry’s problems are all down to parental abuse (Sam Bottoms cameos as the father), and this is a little contrived. And while Gyllenhaal’s sterling efforts strive to gain sympathy for this fraught woman, she nevertheless comes across as a weak, narcissistic, pain in the ass. Sister-in-law Lynnette (a crucial, self-effacing turn by Bridget Barkan) persuades Alexis not to call Sherry “Mommy”: in most circumstances this would be deemed reprehensible behaviour, but in context it’s at the very least understandable. Sherry is a one-woman hurricane, and the child requires a degree of protection from her. Sherry needs protecting from herself. To the writer/director’s credit, the film shows that in this case “the system”, for all its failings and red tape, tries its best, it really does. It’s not an unfeeling monster. But the system too is riddled with human error and individual frailty.

Another reservation would be that if a male director persuaded Gyllenhaal to get her kit off this often, questions would be asked. There’s shock value, and then there’s titillation which will no doubt make the trailer for what’s essentially a quiet, worried film resemble Caligula. And yet Sherrybaby’s raw, gritty edges echo the searching indie movies of the Seventies – perhaps there’s even a hint of Five Easy Pieces or Badlands in the anti-heroine’s awareness that she’s lacking something but ignorance as to what – and sticks doggedly to its own vision. In a brilliantly gauche scene, Sherry sings The Bangles’ “Eternal Flame” to impress her daughter. She thinks she’s great, but she’s no singer. Collyer stays on her till we feel the woman’s utter desperation. Gyllenhaal’s unflinching embodiment of Sherry’s exposed nerve endings make this a fascinating, addictive film.