Sara Watkins – Young In All The Wrong Ways 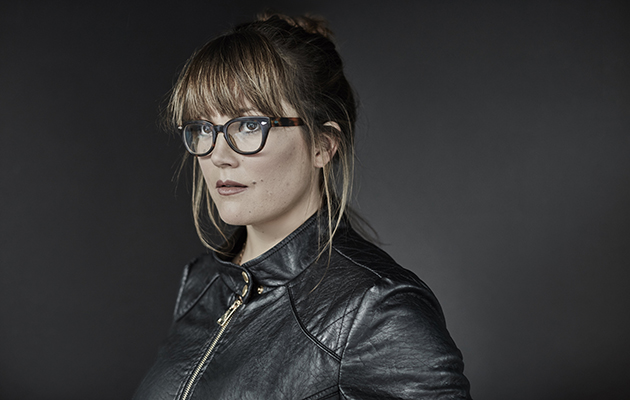 Sara Watkins is just 34, but she’s already managed to put as many miles on her musical odometer as artists twice her age. The SoCal prodigy was just eight years old when she first fiddled onstage with her family, and during the last quarter century, she’s whisked her way through bands and projects as if she were trying on shoes at a Melrose Ave. boutique – playing in the long-running Watkins Family Hour, the all-star octet Works Progress Administration, the radio show A Prairie Home Companion, the one-off collaboration Mutual Admiration Society and, most notably, Nickel Creek, whose five albums set the template for avant-bluegrass.

Watkins’ restless spirit and musical sophistication are just as apparent in the choices she’s made in the making of her three solo albums. She roped in Led Zeppelin’s John Paul Jones to produce her self-titled 2009 debut and entrusted her second LP, 2012’s Sun Midnight Sun, to the young polymath Blake Mills. On those LPs, she surrounded herself with LA luminaries including pedal steel master Greg Leisz, Attractions drummer Pete Thomas, Heartbreakers keyboard player Benmont Tench and multi-instrumental wizard Jon Brion.

Young In All The Wrong Ways is Watkins’ first completely self-written effort, which gives the record a newfound coherence and a distinct personality, as she sets down her fiddle and leaves behind her bluegrass comfort zone for terrain she’d only hinted at previously. She’s exploring this frontier in league with the musicians she’s handpicked for her studio band, all of them members of her extended musical family, whose hub is the Largo nightclub on La Cienega Blvd. in West Hollywood. She tapped one of her oldest friends, Punch Brothers guitarist Gabe Witcher, as producer, while his bandmates, guitarist Chris Eldridge and standup bass player Paul Kowert, comprise the core band with Witcher and in-demand drummer Jay Bellerose. Brion’s guitars and Tench’s Hammond B3 supply much of the musical colour, while Sarah Jarosz and Aoife O’Donovan (her cohorts in the recently formed trio I’m With Her) blend their voices here and there. My Morning Jacket’s Jim James duets on the bluegrass rave-up “One Last Time”, a stylistic bridge to her previous albums.

Apart from the ballad “The Love That Got Away”, which she composed on ukulele, and “One Last Time”, written several years back, Watkins worked up the material for the new record over an 18-month period on a parlour-sized Bourgeois guitar, typically while sitting in the front yard of her Echo Park home. The sylvan setting in which these songs were conceived is belied by the confrontational edginess of the most memorable of them. In contrast to “The Foothills”, which opened Sun Midnight Sun with a reassuring blast of fiddle-powered bluegrass exuberance, the title track kickstarts the new album with an emphatic declaration of intent, as the song’s narrator strides away from the significant other she’s outgrown, and from the frustration and disappointment he represents.

“I learned how to hustle – to like the feel of that burn/Frayed at the edge accelerate into the turn”, she sings, spitting out the words. “I’m not riding any longer on the back of your bike/I’ve gone the miles and god knows I’ve got the fight”. The track climaxes with a furious guitar duel between Witcher and Brion, trading haymakers from opposite sides of the stereo mix. Likewise, the refrains of “Move Me” and “Say So” aren’t so much entreaties as demands directed at a lover or at existence itself, likely both. This sort of wounded assertiveness enlivens Lucinda Williams’ writing and singing, but coming from Watkins it’s unprecedented and exciting. So is the stylistic thrust of these three linchpin songs, which recall Linda Ronstadt’s Peter Asher-produced ’70s classics in their dynamic pairings of ambling country-rock verses and rip-roaring pop choruses.

Not every song burns with turbulence and tenacity. The aforementioned “The Love That Got Away” shimmers with bittersweet Beatlesque loveliness, as does the Witcher collaboration “Without a Word”. In their sequence, Watkins and Witcher have placed “Like New Year’s Day”, written with fellow Largo regular Dan Wilson (who also co-wrote “Say So”), between “Move Me” and “Say So” in the album’s meaty centre; this short-story-like recollection of an escape to the desert allows the album to take a breath, providing some tranquility and perspective between the surrounding emotional outbursts. The mood mellows in the album’s final minutes with the Dolly Parton-like country lament “The Truth Won’t Set Us Free”, followed by evocations of Alison Krauss (“Invisible”) and Emmylou Harris (“Tenderhearted”).

Young In All The Wrong Ways may be Watkins’ third solo album, but it feels and sounds like her first, reintroducing her as a writer/artist of uncommon eloquence and consequence.

Q&A
Sara Watkins
Were you inspired by any particular artists or records in making this record?
Not really. There was some strategy – an occasional reference to a Roy Orbison song or other iconic touchstones – but we weren’t trying to replicate anything. Mostly, we were just trying to play these songs with that band, have it go through their filters and let something new come out.

Does this album have an overarching theme?
A lot of it has to do with the way you process disruption in life and embrace it as a positive thing rather than ominous chaos. So ideally there’s a hopefulness in the arc of the album. It’s about doing a status check on the course you’re on in life and adjusting if necessary. Sometimes that’s easy, and sometimes it requires a lot of reevaluating. This album was written while I was going through one of those course adjustments that we all go through every five or 10 years.

To what do you attribute your growth as an artist?
One thing my previous albums haven’t had is a common thread, other than sonically. With this one, I do feel like I’ve become much more comfortable in what I have to say and how I want to say it. I think that’s been earned over the years by playing, writing, trying to collaborate and being in as many bands as I can. I’m encouraged that all the incredible things I’ve seen and heard in music are sinking in and hopefully coming out.
INTERVIEW: BUD SCOPPA