Earthiness and abstraction in equipoise on alt.country/folk duo’s first 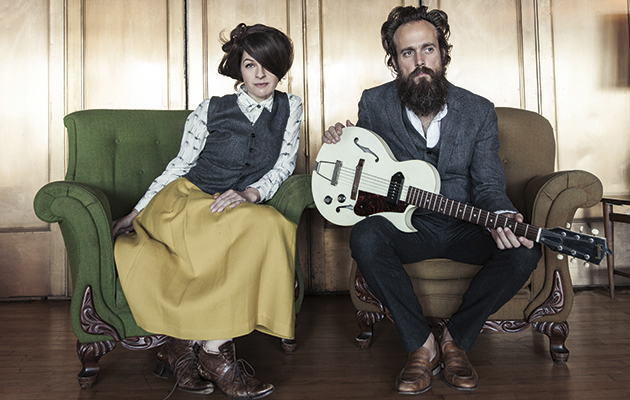 For both Sam Beam and Jesca Hoop, Love Letter For Fire could have gone horribly wrong. Like any untested working relationship, it risked ending up as either an underwhelming compromise or (worse) an awkward clash of two distinctive artistic expressions. There’s a world of difference between a nose-to-tail collaboration and a guest spot – and there are no guarantees.

Beam as good as trademarked a genre in the early noughties with his fine-boned and melancholic, acoustic alt.country/folk recordings as Iron & Wine. Since then, he’s shifted toward a more expansive and poppy, instrumentally lush sound, which peaked with 2013’s sonic travelogue Ghost On Ghost. Jesca Hoop’s articulation is very different. The spry, eloquent songs of her four albums to date are country-folk in only the loosest sense, as much in line with the work of modernists like Susanna Wallumrød and Bill Frisell as say, Joanna Newsom. Beam released an album (of covers) with Ben Bridwell last year and in 2014, he duetted on a song from Hoop’s Undress (the pivotal connection point for this record, it turned out); she’d supported Beam on a leg of his Ghost On Ghost tour and has often welcomed guests to her records. But writing music and lyrics in a partnership was uncharted territory for them both.

That Love Letter For Fire is a triumph of rustic minimalism and unforced, chamber-pop poise, with charm by the skipload, is down to what Beam describes as “a conscious releasing of the reins on both our parts, a giving in to what the combination could and would become on its own, without too much manipulation.” He had in fact been looking for a female writing partner for some time and was already a Hoop admirer. “Jesca’s voice is incredible,” he told Uncut, “her sense of melody exquisite and her turn of phrase unique. I think we both just kind of dove forward [after the “Hunting My Dress” hook-up] with the faith that if we liked the sound of our voices together, then the rest would fall into place. So much of this kind of work is done alone; it was fun to have a trusted teammate that I could lean on for inspiration or helpful criticism.”

Recorded in ten days and produced by Tucker Martine, the largely acoustic Love Letter… employs understated, jazz-literate players including Robert Burger (on piano/keys), Eyvind Kang (violin, viola) and Wilco drummer Glenn Kotche. It was conceived as a set of odes to the ephemeral nature of love, in duet form, in line with the country convention, although only one song (the tender and lowering “Valley Clouds”) really satisfies that brief. According to Beam, what he and Hoop were after was “George and Tammy singing a modern-classical take on ‘Islands In The Stream’, produced in the vein of Big Star’s Third. I’m not sure we reached those lofty heights, but it was a fun place to launch off from.” For the lyric-writing process, the pair had practice sessions involving the free and unedited composing of poems, with lines traded back and forth via email. They got together for a couple of extended songwriting sessions, but much of the work was done down the wire, from Beam’s home in North Carolina and Hoop’s in Manchester.

The album opens with the minute-long “Welcome To Feeling”, which signals the emotional warmth within. Both Hoop and Beam have sensual voices and the interplay between them packs a sweet emotional punch throughout. They switch between singing solo, trading conversational lines and harmonising, with oversinging rationed to maximise its impact, as on the knockout “Soft Place To Land”, which addresses the idea of love as a safe haven. The finger-picked and Fred Neil-ish “Bright Lights And Goodbyes” is another vocal highlight, soughing strings and simulated wind noise conjuring a late-night-bonfire beneath the stars. Musically, the standouts are a hushed “We Two Are A Moon”, which pivots on a short, but highly effective outbreak of jazzy guitar twangling, the strikingly rhythmic “Midas Tongue” and “Every Songbird Says”, a sprightly mix of cello, fingerpicked guitar and percussive chattering, with echoes of Ralph Vaughan Williams.

A deceptive simple, calm record, Love Letter… sounds both intuitive and direct, and any wrangling along the collaborative way is undetectable. Hoop has a new album, Memories Are Now, due later this year and Beam, who previewed two new (unrecorded) songs on Pitchfork Radio in January is presumably now working on his next full-length. This seems to have been a transformative experience for them both; time will tell to what extent.

Q&A
Jesca Hoop
Was the idea of sharing artistic control daunting?
Yes, but in a positive, “what is going to happen here?” way. For me, this was a practice largely in surrender and shape-shifting. We were interested in the malleable potential and what could be created by letting the words and melodies of one be affected, influenced and changed by the other. It did not come without challenge – to the ego, in particular. This is where trust came in. I trust Sam as a writer, so I had to bend and stretch.

In what ways are your sensibilities aligned?
Coincidentally, the year before I met Sam, I’d started developing my own sort of country style. The song “Pegasi” on my upcoming solo record is a good example. I found this dabbling with old American stylings useful in blending sensibilities. Sam and I share a love of poetry and language. Like me, he’s a storyteller, but he has the ability to be more simply spoken, whereas I find it hard not to abstract. I think I also shift personality quite a bit more, whereas Sam is constant. He can be more like garden soil, whereas I am like smoke.

What is it about the classic country duet that appeals?
It seems to me that country duets are generally feel-good songs – even if they are about heartbreak. There is a sense of togetherness, teamwork and the aim to uplift. There is a light-heartedness, humour and sweetness that I really enjoy. Like Johnny Cash and June Carter – theirs is a simple charm and playfulness that endears you to characters in the songs. Also, perhaps, as an American living in England for seven years now, I am more than happy to draw upon my American roots.