On its 16th birthday, the ex-Whiskeytown man's first and best solo LP gets a vaults-raiding reissue 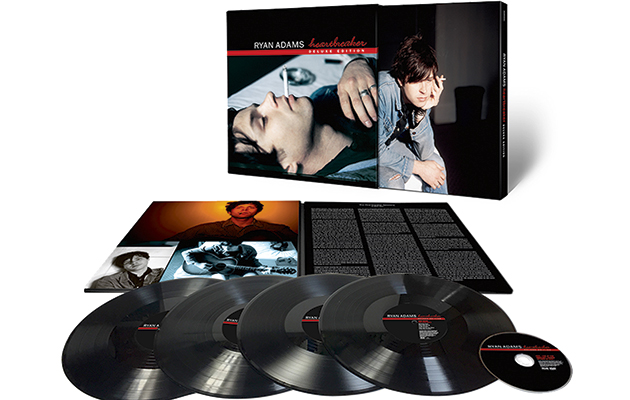 David Ryan Adams, as he was then called, first caught our ear in 1997, on Whiskeytown’s second album, Strangers Almanac, a major label debut of eventually unrealised promise, record company politics and their own volatile infrastructure delaying the release of a third album until 2001.

By then, the band had split and Ryan Adams, as he now was, had put out a solo album, 2000’s much-revered Heartbreaker. Acclaimed at the time by fans as a classic of what was becoming known as Americana, it now splendidly gets a full bells and whistles reissue on Adams’ PAX AM label. Heartbreaker Deluxe is a 2CD or 4LP boxset, plus a concert DVD from October 2000. Both formats feature the remastered original album, outtakes, alternative versions, demos and sundry unreleased tracks of variable merit. Among the latter is a stomping, jokey version of Morrissey’s “Hairdresser On Fire”, followed by some jovial studio bickering over whether it appeared on Bona Drag or Viva Hate, an edited version of which banter became Heartbreaker’s opening track, “(Argument With David Rawlings Concerning Morrissey)”.

Opening an album of delicate folk ballads and weather-beaten country tearjerkers with a conversation about the foppish Manchester entertainer may sound at least incongruous, perhaps even a little addled and possibly quite baffling to many. It’s a typically clever Adams ploy, however, a cute indication of the emotional topography of the album that follows, for which an even more accurately descriptive title than Heartbreaker might have been taken from another Morrissey tune, “Late Night, Maudlin Street”. The album, after all, is something of a hymn to self-pity, epic moping, bereft, stricken, nearly every track an exquisite example of nothing but woe. The more misery Adams pours into these songs, however, the more darkly alluring they become, thanks mostly to the crepuscular atmospheres conjured for them by producer Ethan Johns.

Whiskeytown had played a pretty straightforward kind of country rock, with appealing echoes of The Flying Burrito Brothers and The Replacements of Pleased To Meet Me, Don’t Tell A Soul and All Shook Down rather than the yammering punk of Let It Be and Stink, which was the kind of hardcore racket Adams had noisily essayed in the pre-Whiskeytown Patty Duke Syndrome. There were hints too on the glossier bits of Strangers Almanac of Tom Petty, whose slick commerciality their label rather clearly wanted Whiskeytown to emulate. On Heartbreaker, however, Adams and Ethan Johns abandoned such toe-tapping tunefulness, stripped the music of superfluous frippery, anything that could be described as merely decorative and thus unnecessary, in the process reducing everything to little more than a murmur.

Most tracks feature just Adams, his voice and guitar, often nimbly fingerpicked. There’s an occasional wheezing harmonica, here and there ghostly banjo, sepulchral organ and occasional piano from a pre-Wilco Pat Sansone, eerie harmonies from Emmylou Harris, Gillian Welch, Kim Richey and Allison Pierce. The overall mood is profoundly subdued, whispering and furtive. Some tracks are so discreetly mixed they’re almost subliminal, like figures in a fog, barely glimpsed, there but not there. “To Be The One”, “Don’t Ask For The Water”, “Sweet Lil Gal (23rd/1st)” and “Why Do They Leave?” all, for instance, seem to exist only as shimmer, in a trembling half-light, Adams voice as gently laid upon the arrangements as a shroud. The notable exceptions to this compelling hush are “To Be Young (Is To Be Sad, Is To Be High)”, whose brash clatter joyfully recalls the Dylan of “Subterranean Homesick Blues”, the skittering “My Winding Wheel”, the raucous Bo Diddley-inspired “Shakedown On 9th Street” with Gillian Welch whooping in the background and Adams and Dave Rawlings exchanging crunching electric guitar riffs, and the wonderfully ramshackle “Damn, Sam (I Love A Woman That Rains)”, again evocative of mid-’60s Dylan. The dreamily wistful “AMY”, meanwhile, is often compared to something by Nick Drake, but is surely more redolent of Donovan’s Elysian psychedelia, with its double-tracked vocals, glockenspiel, synthesised woodwinds and sibilant cymbal splashes.

A lot of great break-up albums – In The Wee Small Hours, Blood On The Tracks, Shoot Out The Lights, Back To Black, Lemonade, take your pick – usually come with at least some degree of vitriol attached. Like Beck’s Sea Change, however, angry retribution is largely absent from Heartbreaker, recrimination mostly replaced by bleak resignation, especially on the grovelling “Come Pick Me Up”, which casts the singer as craven, desperate, prepared to endure any humiliation to get his girl back. “Come pick me up, take me out, fuck me up,” Adams sings, wheedling and needy. “Steal my records, screw all my friends, behind my back, with a smile on your face and then do it again…” Elsewhere, Adams is more dignified, poised and poignant, if no less forsaken, especially on the bleakly fatalistic “Bartering Line”, “Call Me On Your Way Back Home” and the superlative “Oh My Sweet Carolina”, a duet with Emmylou Harris that recalls forlorn Gram Parsons ballads like “Hickory Wind”, “She” and “A Song For You”. Best of all is “In My Time Of Need”, which takes its title from the lyric to another Parsons song, “In My Hour Of Darkness”, which so sombrely closed Grievous Angel. A faux-Dust Bowl ballad, sung by Adams in the character of a struggling homesteader, with Gillian Welch providing a tender high harmony line over the spectral plunk of a banjo and Sansone’s wonderfully discreet piano, “In My Time Of Need” is a song of eventual solace and reconciliation, something akin to Warren Zevon’s “Don’t Let Us Get Sick”, love in the end transcendent rather than ruinous. “I will come for you when my days are through,” Adams sings with a quiet passion, “and I’ll let your smile just up and carry me.”

Heartbreaker was the first of 13 solo albums Adams released between 2000 and 2011, three of them in 2005 alone (one of them a double). 2001’s Gold was much-admired (and also an Uncut Album Of The Year), but things then got messy. He was often accused of profligacy, self-indulgence, a lack of quality control. There was much good work to come, but too often the albums that followed have tended to fade into an ubiquitous static, a common noise, not hard to switch off and even easier to forget. Heartbreaker, however, remains a singular pinnacle in a sometimes overstretched career, unforgettable, entirely wonderful.