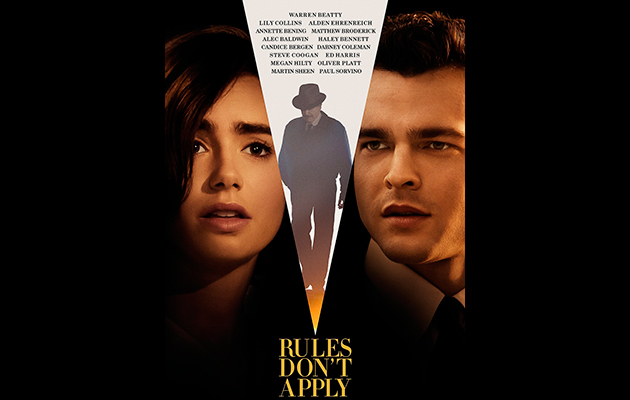 In 1959, Warren Beatty was a struggling young actor with only a handful of minor TV appearances to his name. Perhaps coincidentally, the events of Rules Don’t Apply mostly take place during that same year, when a number of people – starlets, politicians, businessmen and lowly chauffeurs; some real, some imagined – are pulled into Howard Hughes’ orbit. You could be forgiven for thinking that Rules Don’t Apply – Beatty’s first film since 2001 – is really two different films. Is it a love story with a study of an ageing Hollywood monarch tacked on; or an ageing Hollywood monarch’s satire about another ageing Hollywood monarch with a love story bolted on? Considering the year in which it is set, how much of it is also rooted in Beatty’s own formative years in Los Angeles?

Either way, Rules Don’t Apply spends its first act detailing the budding – though strictly forbidden – romance between Marla Mabrey (Lily Collins), one of the many actresses Hughes kept under contract at RKO, and Frank Forbes (Alden Ehrenreich), a driver employed by Hughes’ organization. It’s sprightly stuff, with some good comedy from Annette Bening as Marla’s devout mother and Matthew Broderick as Forbes’ wily mentor Levar. Then Hughes appears, sort of. We see him in shadow for the most part, sitting in hotel bungalows, listening to illicit tape recordings he’s made of conversations with employees, with Marla. Richard Nixon in Mulholland Drive.

If Frank, Marla and Levar are all engaged in lightly comedic pursuits, Hughes is night to their day: unpredictable, stubborn, paranoid. Ehrenreich (Disney’s young Han Solo) and Collins are both charming but framkly they’re amuse-bouches for Beatty’s bone-in prime rib. Beatty reminded me a little of Daniel Day Lewis in Scorsese’s Gangs Of New York, insofar as Day Lewis was clearly acting in a completely different film to everyone else. Here is a man who leaves hotels via the kitchens, under a blanket, strapped to a stretcher. There are some illusions to Donald Trump – another volatile man of significant wealth and unconventional business practices – but really Beatty’s Hughes feels like a continuation of the formidable, single-minded characters he has always excelled at, from Clyde Barrow through to John McCable, Dick Tracy, Bugsy Siegel or Senator Jay Bulworth.