Double-disc retrospective from the king of rustic rock... 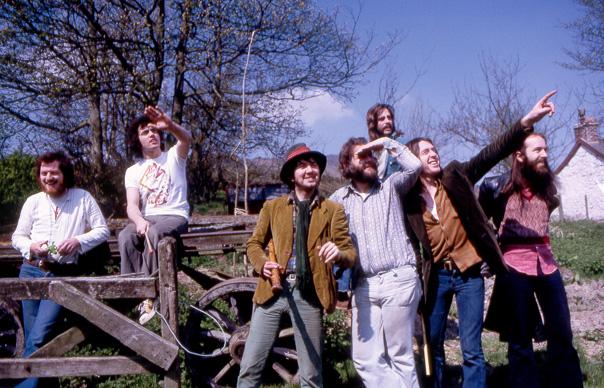 Double-disc retrospective from the king of rustic rock…

When Ronnie Lane left The Faces in 1973 he had grown tired of the rock lifestyle and of being around “the names that, when dropped, attract a crowd,” as he put it so beautifully on “Little Piece Of Nothing”. Even the name he gave his hastily assembled new band was a sly – and, as it transpired, accurate – comment on their commercial potential.

Still only 27 but already deep in the transition from ace face to gypsy king, Lane sealed the deal by settling into Fishpool farm, up in the Shropshire hills near the Welsh border. From his new base, surrounded by animals and rolling countryside, he set about fashioning a rustic-rock idyll in which the music he made reflected the landscape and his new way of life. “Country Boy”, one of 37 album tracks, singles, outtakes, alternate versions and live cuts compiled for this two-disc retrospective, is almost a manifesto, Lane finding “silver in the stars and gold in the morning sun”. Elsewhere there are songs about blacksmiths, poachers, Indian summers and harvest time.

To bring nature’s bounty to life, the shifting groups of musicians he assembled hit upon a fertile blend of rock and roll, country, folk, music hall, roadhouse blues, hot jazz, Cajun and early American roots music. Covers here include “Buddy, Can You Spare A Dime?”, Fats Domino’s “Blue Monday” and the Isaac Family’s bluegrass gospel obscurity “Bottle Of Brandy”. But as well as honouring a past that stretched back much further than “Heartbreak Hotel” or the first Beatles LP, this music contains pre-echoes of future records by Paul Weller, The Waterboys, Nick Lowe, Van Morrisson and countless others. The disarmingly beautiful instrumental “Harvest Home” would sound completely at ease on any recent release by contemporary folk trio Lau.

These tracks hum to the sound of accordions, fiddles, mandolins, saloon bar piano, acoustic guitars, squawking geese and chirruping birds, but as fiddler Charlie Hart points out, “it’s not all polite.” You can well imagine The Faces tearing through “Steppin’ and Reelin’”; “One For The Road” is a rowdy closing time sing-song and “Ain’t No Lady” indulges Lane’s bawdy side, while the raw “Back Street Boy” is rude Southern funk with a Romany heart.

Whether stately or rambunctious, Slim Chance made good time music with bags of soul. Imagine Chas & Dave meeting Meher Baba. The darkly beautiful “Burnin’ Summer” may have a powerful seam of pastoral spirituality running through it, but Lane still prefaces an unbridled first tilt at Chuck Berry’s “You Never Can Tell” with the elbows-out cockney joshing of the young Steptoe. Emerging from the shadow of Rod Stewart, his characterful voice blossomed, settling into a hybrid of Dylan’s clean Nashville Skyline-era croon and George Harrison’s ragged soulfulness.

As wonderful as much of this richly diverse music is, Ooh La La: An Island Harvest is not an entirely satisfactory overview of Lane’s first few post-Faces years. As the title implies, it focuses on his two Island albums, Ronnie Lane’s Slim Chance (1974) and One For The Road (1976). The complete omission of tracks from the first Slim Chance album Anymore For Anymore, released in 1974 on GM Records and therefore presumably sidelined for contractual reasons, is regrettable, ensuring meagre pickings from the band’s first act. All that’s on offer is a (beautiful) alternate version of “The Poacher”, as well as live renditions of debut single “How Come” and Anymore For Anymore’s “Tell Everyone”, the latter pair part of an eight-song BBC In Concert set from April 1974, when Slim Chance, in its initial incarnation, featured Scottish folk duo Gallagher & Lyle.

The live tracks also provide a connective thread back to Lane’s work with The Faces, with outings for “Last Orders”, “Debris”, “Flags And Banners” and “Ooh La La”. The latter song crops up again in a previously unreleased version which brings a vibrant Dixieland verve to one of Lane’s greatest compositions, though admittedly at the expense of some of the original’s poignancy.

Wonderful songs all, of course, but their presence, alongside the jumbled chronology and omissions elsewhere, lend a slightly incoherent, rag-bag feel to an otherwise very welcome salute to an undervalued songbook. A decent crop, but not quite the full golden harvest.
Graeme Thomson

Q&A
SLIM CHANCE’S CHARLIE HART
What are your memories of life at Fishpool?
It’s the most fabulous, out-of-the-way part of the world. We’d stay up all night, watch the light coming up in the valley, then I’d go out and sow barley with Ronnie and we’d come home and record “Harvest Home”. The music is really rooted to the place, the lifestyle, the characters. It was idyllic. When he moved back to London in the early 80s he’d say to me, ‘God, that was a magical time.’

The blend of music is remarkable.
He was bringing in music hall, Cajun, early jazz, Leadbelly, East End songs, and somehow it all came together in unified form. He has been influential. In the mid-70s rock and roll was getting over-ripe, and in a way Ronnie was reacting against that in a similar way to punk. Ronnie did not like pretence, that’s for sure.

Did he talk much about The Faces?
He wanted to start afresh, but he’d talk about it. He liked Mac, who remained a very good pal, and there was a bit of ranting about Rod Stewart! He didn’t let go of everything. He wanted to retain the entertainment factor of The Faces, he wanted to look good on stage, and he was still up for rocking out.

Was he deliberately turning away from the mainstream?
He had done it all, so in a certain sense he was content to do whatever he wanted artistically. But he was also trying to broaden rock and roll, and to do that you have to remain reasonably commercial. We did OK, but we weren’t successful enough to keep the band together. That was a source of deep regret to him. He was trying to do two things and couldn’t quite manage it.
INTERVIEW: GRAEME THOMSON