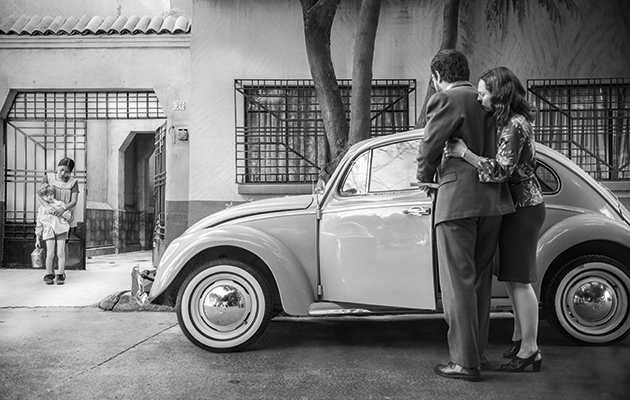 As awards season approaches, leave it to Mexico’s Alfonso Cuarón to redefine the boundaries of Oscar bait.

After the interstellar $100m Hollywood thrills of Gravity, which partnered Sandra Bullock with George Clooney in space, his follow-up is a Spanish-language drama, made for just over a tenth of the cost, starring a complete unknown in a film that could conceivably compete for both Best Picture and Best Foreign Film – even after making its debut on the small screen as a Netflix Original. The pros and cons of the streaming service can be debated endlessly, mostly negatively for its often lax quality control, but Roma is a terrific argument for its blank-cheque, no-questions-asked attitude to directors with a vision.

The setting is ’70s Mexico, where Cleo (Yalitza Aparicio) is maid to a professional married couple and their four children. What transpires is a low-key soap opera, but seen from the maid’s perspective, as the husband and wife drift apart, leaving Cleo to step in where the kids are concerned. The scenarios range from the slight to the melodramatic and, when local riots break out, even epic – mostly as a backdrop to Cleo’s troubled love life – but the beauty of Cuarón’s film is its simplicity. Though its production values are anything but basic, recreating the director’s youth in shimmering high-definition monochrome, Roma is really a film about human contact, and what seems at first glance to be a film steeped in middle-class privilege soon reveals itself to be so much more thoughtful.

Some of its technical excellence – notably its immersive Dolby sound, not to mention its beautiful cinematography, will be lost on even the biggest TV – but in the cinema (where it arguably belongs), Roma has a hypnotic power that only builds over its somewhat overlong running time. Cuarón has made more entertaining movies for sure, but none so heartfelt and even soulful.