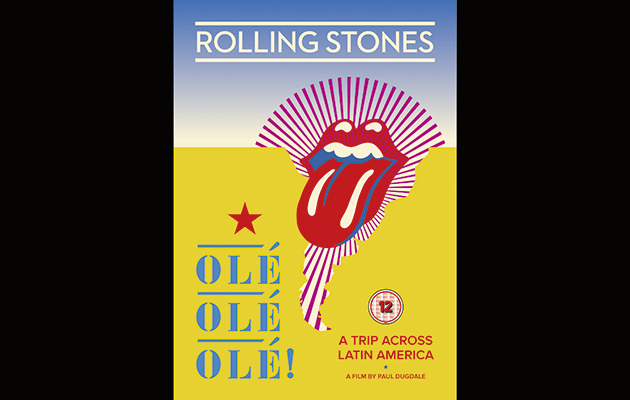 Following a limited theatrical release and a Christmas airing on Channel 4, this companion piece to last year’s Havana Moon finds a home on DVD and Blu-Ray. A relatively straight recording of the Stones’ historic Cuban concert of March 25 2016, Havana Moon placed the viewer onstage and in the audience. Paul Dugdale’s documentary, on the other hand, offers a glimpse behind the scenes as the band’s small army of fixers battle to pull together the Cuban show while Jagger, Richards  & co sweep regally through nine Latin American cities.

Olé Olé Olé! follows the Stones from the final day of rehearsals in Los Angeles – “there’s always a bit of rust to rub off,” reckons Jagger – through Santiago, Buenos Aires, Lima and Mexico City, all roads leading to the uncharted waters of Castro’s republic. “Stepping through the known into the unknown,” says Richards with a Muttley chuckle. Opening with the samba beat of “Sympathy For The Devil” drifting over the favelas, presumably to establish the Stones’ bona fides in the region, it’s framed as a classic quest: will or won’t our plucky heroes overcome the numerous logistical and cultural obstacles to pull together the Cuban show?

Their man in Havana, frazzled producer Adam Wilkes – “He opened China for us,” says one colleague with awe – becomes a key character as the matter goes “right to the top of the food chain: Raul Castro”. There is clandestine backroom drama, as urgent phonecalls and vows of secrecy are made over important looking bowls of oranges. Everything appears to be going to plan until an announcement that Barack Obama is visiting Havana 12 hours after the concert ends throws it all into disarray. The Stones reschedule, only for the Pope to criticise their decision to play on Good Friday. “Bit cheeky,” says Richards. “He’s not my manager.” They get there in the end, of course, and pull it off with some style.

The rest of the film concentrates on the group’s amiable stroll through Latin America in the lead up to Havana. There is performance footage from several shows, but the majority of the action takes place offstage. The quartet appear open and relaxed, reminiscing about their early days, discussing private passions and offering the odd – no doubt carefully stage-managed – unguarded moment. Jagger makes a 2am visit to a family of drummers on the outskirts of Montevideo, clapping along like a loon. A grinning Richards waves a “magic stick” around to stop the rain and – with Jagger egging him on – recalls writing “Honky Tonk Women” at a ranch outside São Paulo, a sweet preamble to the pair performing it backstage with just an acoustic guitar. Ron Wood meets a local graffiti artist and talks about touring being “the glue, the wobbly stuff that keeps us together”; Charlie Watts, as ever, tries to be anywhere the camera isn’t. There are thoughtful musings on travelling, fans and fame. “It’s not really you they are looking at, it’s an act-out version,” says Jagger. “You try to live a more or less normal life like anybody else.” Cut to the private jet and Sun King hotel suite.

The aim of the film is to humanise these grand old men, while at the same time re-establishing their rebel status. With several countries on the tour itinerary having ignominious recent histories of military dictatorships, civil rights abuses and restrictions on personal liberty, Latin American devotees still hold a touching regard for rock’n’roll as a badge of protest. “As soon as you ban something,” says Richards. “They take it to their hearts.” The film explores the subcultures which have formed around the Stones in places like Chile and Argentina, where fans retain much of the fanaticism and raucous street spirit which once followed the Stones everywhere. A gig in Buenos Aires certainly looks a good deal more lively than a wet Tuesday night in Twickenham.

In each city, fans are interviewed and local bands filmed playing Stones songs in their indigenous styles; the Mariachi “Happy” is particular fun. These carefully framed snapshots of local colour will be a tad contrived for some tastes, but Olé Olé Olé! is, overall, a warm, atmospheric and occasionally revealing mutual gracias: from fan to band and back again.