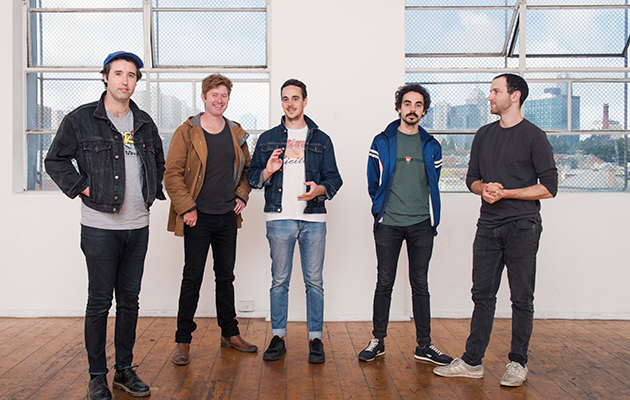 Put Hope Downs in the CD player, press play and before the digital clock’s even ticking, “An Air-Conditioned Man” is coming at you like the wind you’d expect to accompany the envisioned Rapture, a scorching holy gale. One, two, three guitars, two voices, sometimes overlapping, combine into a single noise over a relentless rhythm, part Mo Tucker backbeat, the rest motorik pulse. It’s entirely addictive – one fix and you’re hooked.

Rolling Blackouts Coastal Fever were formed in Melbourne in 2013, by singer-guitarist Fran Keaney, guitarist Tom Russo, with Tom’s brother Joe on bass and, eventually, Fran’s cousin Joe White on third guitar and vocals, and drummer Marcel Tussie. Keaney, Tom Russo and White are the band’s principal songwriters and singers, the songs often dialogues between them. The sound they make, however, belongs to all of them, every instrument a key part of the miasmic sonic swirl.

They were part of the same local scene as Courtney Barrett, with whom they share certain askew lyrical perspectives, if little of Barrett’s closely observed narrative specificities, Rolling Blackout usually preferring allusion to illustration. They’ve released two mini-albums: “Talk Tight” (2016) attracted great reviews and brought them to the attention of Sub Pop, who released last year’s thrilling “The French Press”. Legitimate comparisons were made between these records and literate, pop-savvy ’80s groups like The Go-Betweens, Orange Juice and The Triffids, and New Zealand bands like The Chills, Bats and The Clean. You could also hear The Velvet Underground and Television  in the mix, maybe a hint of the fractured, disintegrating psychedelic juxtapositions of “Laughing Stock” and “Your Mind And We Belong Together”, the weird last single by Love’s original lineup, released between Forever Changes and Four Sail.

The album Hope Downs most reminds me of, however, is REM’s Murmur, which on its release in 1984 changed the lives of a lot of people, mine included. The two records share the same spectacular impatience to be heard and impress, a kinetic restlessness, an almost fevered superabundance of ideas, melody and brightly ringing guitars, oblique lyrics that mystify and illuminate simultaneously. Exciting tracks here like “Talking Straight”, “Time In Common” and “Sister’s Jeans” wholly recall the rip-roaring assault of “Radio Free Europe” and “Moral Kiosk”, the whole yet underpinned by the kind of drifting melancholy elegantly articulated by Murmur cuts like “Perfect Circle” and “Talk About The Passion”, even when the music burns as bright as an oil-field fire.

Rolling Blackouts virtually weaponise brevity on Hope Downs. Only three of the tracks are longer than four minutes, and most clock in at three or less. They pack so much into each of them, however, that it’s akin to finding the full text of Infinite Jest engraved on the back of a fridge magnet. There’s a pent-up hysteria to some of them, barely contained, that finds release in rhapsodic guitars, an often ecstatic sound. Rolling Blackouts, though, rarely merely jam. These songs are meticulously arranged, well practised, a lot of hard work put into their precise perfections, even as they sound entirely intuitive, as if all these incredible ideas have been released to them on a whim. The songs themselves, for the most part, seem to be about discordant love, the terminal twitches of dying relationships, breakups, betrayal and heartbreak, the usual boy-girl shit. But on other levels, they speak of larger crises of separation, estrangement, the cruel nostalgia of things remembered you’d rather forget. They could be about lovers, refugees, her, me, you there with the glasses.

Let’s be clear. Hope Downs doesn’t invent anything “new”.  It’s the kind of record I could have been listening to when I was 15 and still be playing now, timeless in its past and future reach.