Rogue One: A Star Wars Story

First spin-off from the series: familiar but different 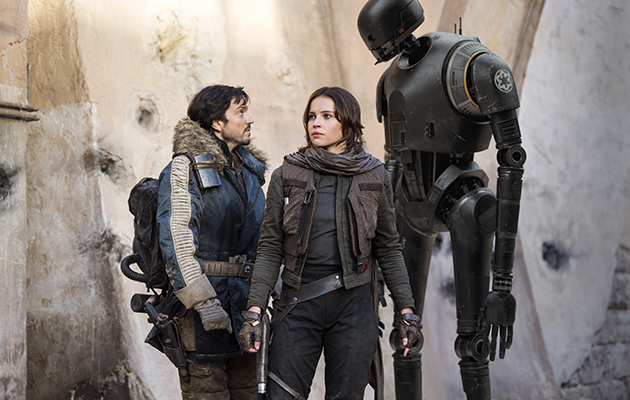 It says something about Rogue One: A Star Wars Story that this first spin-off from the interstellar franchise casts two actors to play Darth Vader. No longer is the burly frame of Dave Prowse simply enough to shoulder the iconic weight of the Sith Lord, it now requires the efforts of many players to manifest his crepuscular, asthmatic presence on screen. This seems a convenient metaphor for Gareth Edwards film itself, which treats the ready-made pre-fab blocks of the Star Wars Universe with an undue reverence when, really, he could have benefitted from kicking back a little and relaxing. After all, if Edwards can bring Peter Cushing back from the dead – mwah ha ha! – then surely he can risk a little spontaneity or reckless impulse now and then?

The problem facing Edwards – indeed, anyone entering the orbit of a fully armed and operational billion-dollar franchise like Star Wars – is that he is hamstrung by the pre-existing demands and protocols of the series. As Monsters and his Godzilla reboot ably demonstrated, Edwards has a clear voice and a strong handle on a box of effects. He is allowed to go so far with Rogue One but – as reports of extensive reshoots under the auspices of scriptwriter Tony Gilroy attest – perhaps not as far as he might have liked. As it transpires, much of Rogue One is a push-me pull-you with George Lucas’ original films. Edwards film is implicitly tied to events in A New Hope although the director strains to push the film – stylistically, at least – in other directions.

Repeatedly during Rogue One’s two-hour running time, Edwards tries to invert the palette and style of the franchise. Instead of a boy hero raised on a desert planet, we meet Rogue One’s female protagonist Jyn Erso (Felicity Jones) on her snowy homeworld. Lucas’ rogueish space pilots, wise old knights and cutesy droids are replaced by defectors, militants, spies, saboteurs and assassins. In Lucas’ corner of the galaxy, events took place in space ports, cloud cities and forest moons. Here, the action unfolds in the cramped, dimly lit interiors of stolen spacecraft, in warzones and military-industrial facilities. One sequence, set in the holy capital city of a pilgrim planet, finds the occupying Imperial forces engaged by insurgents. A protracted battle takes place at night, in the rain. Where are the comedy droids, exactly?

The story takes place between Attack Of The Clones and A New Hope, where plucky Jyn Erso leads a group of rebels in an attempt to steal the design schematics to the Death Star – which Jyn’s father, Galen (Mads Mikkelsen), a brilliant scientist, has been coerced into designing. She’s thrown together with Diego Luna, Riz Ahmed and Donnie Yen, who bring a pleasingly cosmopolitan diversity to proceedings. There is a reprogrammed Imperial security droid – K-2SO, voiced by Alan Tudyk – which has a good line in sardonic put-downs but is by no means a rival for R2-D2 in the cutesy stakes. Meanwhile, Ben Mendelsohn is ostensibly the film’s key villain – the Empire’s zealous administrator Krennic, responsible for overseeing the construction of the Death Star. But even he is outmanoeuvred in the end by Cushing’s chilling, imperious Grand Moff Tarkin – resurrected, convincingly, via CGI.

And then there’s Vader, who appears in two scenes. In the first, he trades some classic Sith bantz: “Be careful not to choke on your ambitions,” delivered as he Force-strangles a hapless colleague who has overstepped the mark. In the second, he is at his most demonic: emerging from the darkness of an airlock to single-handedly cut down dozens of Rebel soldiers in a relentless lightsabre attack. The film’s final line of dialogue is delivered by yet another franchise veteran – a moment designed to seamlessly stitch Rogue One into A New Hope and also presumably to give the audience a closing lift after the death of so many major characters.

Going forward, it will be interesting to see whether Rogue One proves to be the exception or the rule for this auxiliary series of stand-alone films (do we count the 1978 Holiday Special or the Ewoks’ Caravan Of Courage?). If we can assume the main Star Wars films will stick assiduously to an established template, how far will directors be allowed to stray for these spin-off films? Perhaps, like the lesser Marvel movies – Ant-Man comes to mind – these Star Wars spin-off films will provide filmmakers with greater creative freedom. Or, perhaps, the illusion of it.