Thanks to the Bon Bon Club Marseille 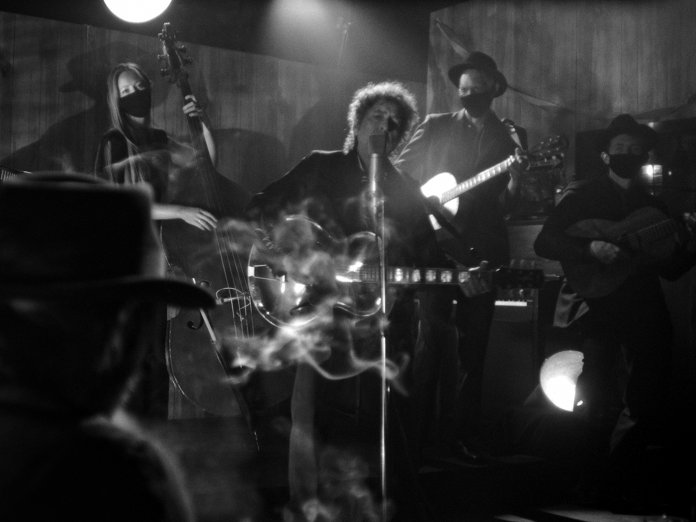 Over the past decade, Bob Dylan has been working on an ongoing series of paintings he calls The Beaten Path, devoted to depictions of a particularly American landscape that’s probably on the edge of disappearing forever, but which he stubbornly insists still stubbornly exists, if you only looked: a handmade place of lost highways and forgotten barrooms and city lights in smeary rain; of lonely drive-in movie lots and funky diners and juke joints that all seem to float in some unfixed time that could be anywhere from the early-1930s to early tomorrow morning.

Shadow Kingdom – the title Dylan has given to his “Exclusive Broadcast Event” for the Veeps livestreaming service – looks and sounds like it could be taking place inside one of those paintings; except that where Dylan’s canvases vibrate with solid colour, this show takes place in a shimmering, liquid black and white world. Directed by Alma Har’el, the setting is a small roadside dive, with Dylan and his band crammed onto a tiny stage or shoved into the corner of the chequerboard floor, playing to a scattered audience of comically chainsmoking patrons who seem vaguely disinterested to begin with, stay that way for most of the time, then finally start dancing under the paperchains strung across the ceiling just as time begins to run out.

As well as Dylan’s paintings, the setting stirs up a kaleidoscope of associations: of the Depression-era staging for Girl From The North Country, the recent Broadway musical based on Dylan’s songbook by playwright Conor McPherson; of Dylan’s 1983 video for “Sweetheart Like You” set in an empty dive; of a half-hour black-and-white TV special that Dylan made back in 1964 for the Canadian series Quest, in which the 23-year-old singer played his songs in a workingman’s bunkhouse while weary woodsmen drank and smoked cigarettes and ignored him; and of an incredible performance one of Dylan’s acknowledged masters, Howlin’ Wolf, filmed for The American Folk Blues Festival that same year, set up in the corner of an abandoned afterhours barroom.

Increasingly, too, the whole scene – sometimes hilarious, sometimes disqueting, often both – evokes the kind of deeply-felt surrealist-noir-Americana David Lynch has made his own.

What’s going on outside this tiny flickering bar, you wonder, and why does it feel like it’s the end of the world?

Little was known about Shadow Kingdom before the show aired, and so some basic facts seem in order. Although billed as Dylan’s “first concert performance since December 2019”, when the pandemic forced him off the road along with everyone else, this was much less a recording of a live performance than a very carefully filmed special, practically a linked set of music videos.

Dylan’s stalwart road band are absent; instead he comes backed by a new ensemble of five relatively young, incredibly adept musicians – Janie Cowen, Joshua Crumbly, Alex Burke, Shahzad Ismaily and Buck Meek, all wearing black facemasks. (Due to COVID-19, of course. Or, perhaps, to protect them from the amount of second-hand smoke getting blown their way by the audience. Or maybe because Bob Dylan just likes masks.) Usually, they assemble around Dylan in a group of four, the instrumentation largely acoustic, old-timey: accordion, guitar, mandolin, double bass, with electric guitar on standby for flashes of Chicago blues or rockabilly.

An onscreen caption promises “The Early Songs Of Bob Dylan”, a category that turns out to include “What Was It You Wanted” from 1989’s Oh Mercy – which, when you stop to remember Dylan’s performing career now spans 60 years, seems fair enough. Mostly, though, the songs are drawn from the mid-1960s and early-1970s, with Dylan digging out some tunes he’s left alone for a while, including a couple he hasn’t played live in decades: that hypnotic “What Was It You Wanted”, rendered in a way simultaneously swampy and delicate; and 1966’s “Pledging My Time”, with Dylan casting softly after the shadow of Little Walter on harmonica.

The most pertinent fact of all: with Dylan in fantastic voice, singing with the sustained power and dexterity acquired during his American songbook albums and brought into new focus with 2020’s Rough And Rowdy Ways, these songs sounded incredible.

Many have been subtly rewritten, and almost all are presented in radically altered new arrangements: a “Tombstone Blues” that broods and stops and starts, Dylan declaiming like a preacher grown used to being plagued by visions; a gorgeous, goosebumpy “Queen Jane Approximately”; a hysterical “I’ll Be Your Baby Tonight”, transformed into a pounding Vegas rockabilly showstopper, Dylan singing deadpan straight down the camera lens, flanked by two glammed-up young women, one of whom brushes lint from his shoulder without batting an eye; a helter-skelter, herky-jerky “Wicked Messenger”; a hugely poignant “Forever Young”.

“It’s All Over Now, Baby Blue” brought the curtain down after 50 timeless, too-short, minutes, leaving you wondering whether there’s more in the can ­– “The Later Songs Of Bob Dylan”, maybe?

Certainly, at the age of 80, with this performance, Dylan demonstrated that he’s still way out there, still on the beaten path. It’s not dark yet – there are no shadows without light, after all. A film for the plague times, it felt like the end of the world, and the end of the world felt great. Smoke ’em if you’ve got ’em.

SETLIST
When I Paint My Masterpiece
Most Likely You Go Your Way
Queen Jane Approximately
I’ll Be Your Baby Tonight
Just Like Tom Thumb’s Blues
Tombstone Blues
To Be Alone With You
What Was It You Wanted?
Forever Young
Pledging My Time
The Wicked Messenger
Watching The River Flow
It’s All Over Now, Baby Blue

(All Along The Watchtower – instrumental under end credits)