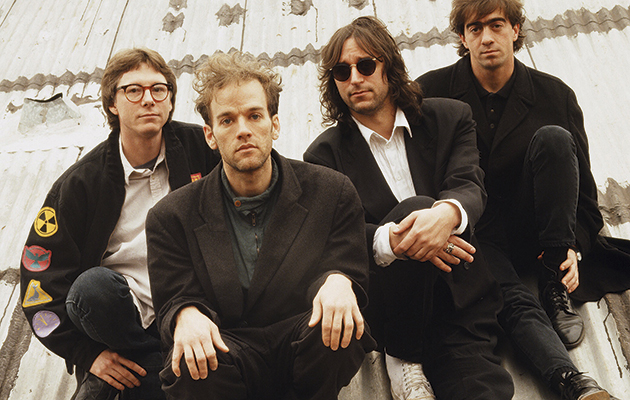 When REM released their seventh album, Out Of Time, in 1991, even some of the most glowing reviews took a moment to disparage “Shiny Happy People”, a deliriously upbeat pop song with silly lyrics and a waltz-time bridge. It’s long been a divisive number among fans, perceived as an experiment gone horribly awry or a rare lapse in otherwise impeccable taste. On the other hand, it was the album’s second single and a Top 10 hit in the US and the UK alike.

On this new 25th-anniversary edition of the band’s breakout album, that song emerges somehow fresh and even poignant, with Peter Buck’s rollicking guitar riff signaling their imaginative rewrite of the Archies’ tooth-rotting smash “Sugar Sugar”. Heard after so many years of grunge rock, alt.rock, garage rock and indie rock, the song’s ebullience sounds radical. The new remastering makes every note sound shinier, happier – a lively contrast to the rougher-around-the-edges demo version included in this set.

Just as “People” has aged extremely well, “Radio Song” has aged poorly. It once sounded like a rock band going for broke, taking up Elvis Costello’s call to arms against unimaginative radio playlists. So many years removed from the heyday of terrestrial radio, its message and its groove sound hopelessly stiff, simultaneously too glib and too serious, with KRS-One a baffling presence. REM sound like they’re aiming for Sonic Youth’s “Kool Thing” but end up somewhere in the vicinity of Springsteen’s “57 Channels (And Nothin’ On)”.

Those two songs illustrate the weird fate of Out Of Time, perhaps the slipperiest entry in the band’s catalogue. It was, by most accounts, their breakout release, the one that proved previous fluke hits weren’t actually flukes and that elevated them from cult status to mainstream success. “Losing My Religion” made them mainstays on the same medium “Radio Song” lambasted, and its video introduced the Dutch masters to MTV viewers.

What made this achievement so surprising was the degree to which Out Of Time represented a departure. Burned out from the world tour behind their ’88 Warner Brothers debut, Green, and bored with their self-assigned roles, REM mixed everything up. For the most part Buck set aside the electric guitar and picked up a mandolin, which runs like fine stitching throughout “Religion”. Mike Mills traded his bass for an organ and started singing more; Bill Berry got out from behind the drumkit to play different kinds of percussion, which are even more noticeable on the live recordings that accompany the new boxset.

Even Michael Stipe changed the way he approached his role as frontman and vocalist. He’d been enunciating clearly for a few records by then, but here he pushed his vocals even more to the forefront, and started writing love songs. Nothing on Out Of Time plays like a traditional pop love song, though; they’re darker, wilier, wilfully evasive. “Low” evokes the shame of what is presumably a one-night stand, engaging in intimacy out of desire rather than affection: “I skipped the part about love,” Stipe confesses as the cello strikes a sour note behind him. Out Of Time presages the is-he-or-isn’t-he eroticism of REM’s ’94 glam-rock outing Monster.

These songs reveal a band at their most self-conscious; they were never more aware of themselves as a unit than at this time, which is reflected in the demo titles: “Me On Keyboard” became “Me In Honey”, “Sad Slow Rocker” transformed into “Endgame”, even “Country Feedback” works better as a description of the music than as a summary of the lyrics. The presence of so many rough early takes in this set, most of them instrumentals that would serve as lyric-writing prompts, underscores the degree to which the band foregrounded the creative process. Out Of Time exists as a document of its own making.

Because they knew they were flirting with mainstream success, REM flirted with pop music, almost as a pre-emptive strike against the inevitable cries of “Sell out!” While that lends the album a distinct personality within the band’s catalogue, Out Of Time has necessarily lost some of the urgency it had in the early 1990s. In fact, how we hear the album in 2016 is determined more by what followed its release than what preceded it. Two years later Automatic For The People would prove even more popular and even more inventive, both musically and lyrically. Those songs had weight and gravity, informed by the death of Stipe’s parents and coloured with a velvety nostalgia.

By comparison, Out Of Time sounds slight, so pop-driven that it feels weightless; in ’91, it sounded like a triumph, but really it was a herald of triumphs to come. There is, however, something extremely reassuring about the volatility of this album, its out-of-time-ness, which suggests that the music isn’t simply confined to the past but thrives in the present.

Q&A
Peter Buck
Why did you decide not to tour behind this album?
We had never had a chance to consider where the band was going. Within weeks of playing our first show, we were writing songs, demoing things, playing five nights a week. For years it had been a full-time thing. We needed to step away. It wasn’t like we were avoiding anything. We were just getting some distance for our sanity.

That involved switching up instruments. Why did you gravitate toward the mandolin?
I bought a mandolin on tour in ’87, I think. I was never really good at it, but it became a good songwriting tool. It never occurred to me to play mandolin in a bluegrass style. I’ve heard that music since was 12, but I never sat down and learned to play that way. For me it was a rock instrument.

The reissue emphasises the creation of these songs – from instrumental demos to finished tracks.
Every couple of weeks we would go into John Keane’s studio, which was two blocks from my house, and record some things just so we’d remember them. We didn’t consider it doing demos. Michael would take away a cassette of what we’d done and would make up lines for a couple of them. That’s how we worked things out.

Some of those early demos make it sound like Out Of Time could have ended up sounding more like Green.
There were some that were rock-oriented, but nobody had any interest in pursuing that sound. That wasn’t where we were at that point. We would get something down and say, ‘Have we done that before? Geez, I don’t know.’ Putting down the electric instruments pushed us in a different direction. You can hear the chord changes and melodies a little more clearly without the loud guitars.
INTERVIEW: STEPHEN DEUSNER