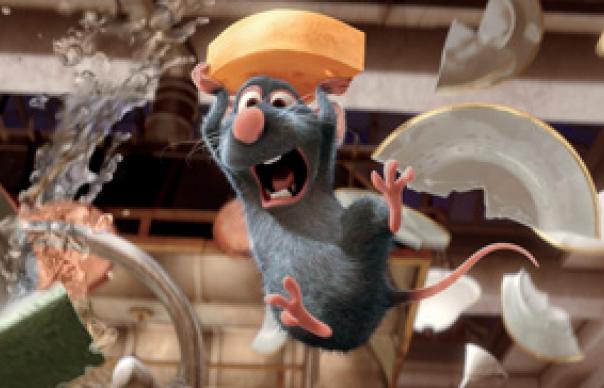 After the disappointment of the petrol-headed Cars, the Pixar animation studio returns to form with its latest offering. Directed by The Invisibles’ Brad Bird, Ratatouille is a warm, extremely likeable comedy set in the kitchens of Paris’ grandest restaurants.

The film’s unlikely hero is Remy, an angst-ridden rat with an unnatural gift for cooking. Although he’s clearly unwelcome in any self-respecting kitchen, he takes to heart the motto of celebrity chef Auguste Gusteau – “anyone can cook” – and thanks to an unusual alliance with nerdy, human kitchen cleaner Linguini, starts to work his culinary magic on the palates of Parisian gourmands. But there’s one set of tastebuds the pair need to titillate – those of restaurant critic Anton Ego (wonderfully voiced by Peter O’Toole, with a sneer that could curdle milk).

The cadaverous Ego provides many of the film’s biggest laughs and, in a childhood flashback, a moment of unexpected pathos. But Remy, animated with a full range of Gallic shrugs, is another winning creation from Pixar, appealing enough to overcome the audience’s rodent revulsion without losing his essential rattiness.