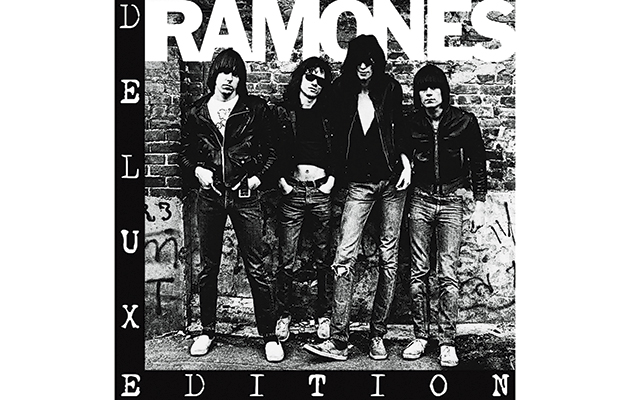 “Ramones” and “deluxe” might be two words you’d think should never go together, but this 40th anniversary, three-disc set of the Ramones’ debut is the latest manifestation of a gradual reappraisal of the band that began with the 2003 documentary, End Of The Century. If the Ramones had previously portrayed themselves as something of a cartoon – The Archies with black leather and glue stains – End Of The Century shaded in the depth, turning them into a dark, difficult graphic novel. It showed for the first time the extent of the hatred that existed between Johnny and Joey, a personal tragedy that lay at the heart of the fraternity, and it also showed that their delinquent fusion of music and image was not a dumb fluke – this was a band knowingly acting within a specifically New York tradition of pop art-rock.

That point is driven home by the album’s producer Craig Leon, who remastered the tapes for this reissue and contributes fantastic liner notes. According to Leon, Ramones was always perceived as the first element of a three or four-album run that would drive home the same themes, over and over – before they began recording, they wrote a list of 35 songs they planned to record over the next couple of years. Later, Leon and Tommy Erdelyi/Ramone, the drummer and musical director, considered cutting the album as a single continuous track to reflect the aural bombardment of the Ramones live experience but also the band’s monomaniacal vision. The Ramones, like Warhol or Lichtenstein, were masters of doing one thing brilliantly and repetitively – something reinforced by the second disc of this set, which contains singles and unreleased demos, including tracks that would appear on subsequent albums such as “You’re Gonna Kill That Girl”, “You Should Never Have Opened That Door” and “I Don’t Care” but could easily have fitted on Ramones.

The set is split into three discs, which give the brevity of an average Ramones song allows for nearly 80 tracks (albeit six of which are different versions of “Blitzkrieg Bop”). Disc one offers a remaster of the original stereo version of the album, plus a brutal, focused mono mix, available for the first time (it’s also being issued on vinyl). Leon’s challenge as producer was always to capture the thundering impact of the band and he had originally toyed with releasing the album in mono for precisely this purpose. In his notes, he explains how each instrument was isolated to achieve “the totally unique sonic environment of separation that characterizes the final mix of the album”. Equal care was paid to mixing, with Leon rejecting a first mix as too conventional until settling on one inspired by A Hard Day’s Night ¬ the Ramones were Beatles nuts, saw themselves as a Bizarro version of the originals, and even wanted to record Ramones at Abbey Road – replicating the odd tension of an old-fashioned four-track mix and achieving with this “retro nouveau style” the desired tone of “imbalance rather than balance”. Finally came the mastering sessions. While Nick Kent scribbled notes in the corner, the acetate grooves were cut so deep to get the requisite volume, it burnt the cutting lathe. Ramones might sound rough and ready – and it was certainly recorded at haste on a tiny budget – but it still utilised whatever that was available in “a state-of-the-art New York studio of the mid-70s”.

The demos on disc two – which include the bludgeoning unreleased version of “Today Your Love, Tomorrow The World” with Nazi lyrics – give an idea of the difference this attention to detail made to the final releases: tracks like “53rd and 3rd” and “I Wanna Be Your Boyfriend”, while entirely recognizable, are tinny and rough in their original form and would later be both beefed up and smoothed down by the studio process. Otherwise, nothing changes. The Ramones knew what they had was special and they didn’t want to dilute it even if that meant reviews for the completed album, a lacerating 29 minutes of absurdity and attitude, would confuse the likes of the Dayton Journal Herald, who dismissed it as “El Stinko garbage”, failing to see the line the band drew from rock‘n’roll through British Invasion, girl groups, bubblegum pop and glam.

Disc three gives the album further context. It features two live sets recorded one night at The Roxy in Hollywood in 1976 – the second has not been released before, and is, as you might hope, near identical to the first. Every song is the same but different, with Dee Dee barking out 1-2-3-4, at one point in the middle of a song, Joey flattening vowels, Johnny thundering lightning chords and Tommy offering minimalist percussion. It also adds a dose of the one thing people missed from the debut: a sense of humour. Joey’s deadpan intros are brief – and repetitive – but they reinforce the wit that lay behind the surliness of the most serious joke in punk.