Stallone revisits his 80s high body count past once again 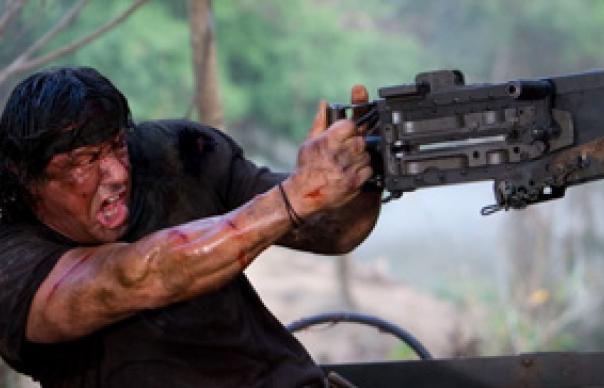 
Last year, Sylvester Stallone revisited his other, most famous creation in the valedictory Rocky Balboa. Whatever you might think of Stallone’s possible motives for resurrecting his franchises there was, at least, something mildly satisfying about seeing the visibly past-it Rocky struggling to drag himself back to match fitness. With Hollywood culture predisposed towards youth, where our heroes are always strong and virile, the sight of a breathless and sweating Rocky was a surprisingly bold admittance of both the character and Stallone’s ageing.

There is, perhaps inevitably, no room for such allusions to mortality in Rambo. Born of that Eighties’ action movie culture that relied on gallery-pleasing one-liners or the size of a character’s gun by way of character definition, Rambo was as comic book as you could get. So, here he is, bandana firmly in place, pectorals at bursting point, heavy artillery never too far from reach, a’grunting and a-sweating as he dispenses violent (very violent) retribution to the pesky Burmese bad guys who provide this movie’s body count. This time, he’s living in Thailand, running a steamboat business, and he agrees to guide some friendly missionaries over the border in Burma; when they go missing, he heads off to kill any living thing in sight. Cos, as the poster dutifully reminds us, heroes never die – they reload.

There is, it has to be said, something preposterous about watching Stallone, aged 60+, running through the jungles of South East Asia, ripping out throats, impaling enemies on spears, destroying bodies in a hail of hot lead death when, really, he should be sitting with his feet up in an old folks’ home, dunking Bourbons in his afternoon cup of warm, milky tea.

The body count really is extraordinarily high, awfully so. I can’t remember the last time I saw a film where so many people were so brutally, and graphically, killed. Oh, maybe it was Rambo 3. Anyway, you’d be far better off saving your pennies for the brilliant Son Of Rambow, opening here on April 4, where two English boys decide to remake First Blood during one summer in the Eighties. It’s warm, charming and delightful; some considerable improvement, then, on this grim, recidivist venture.