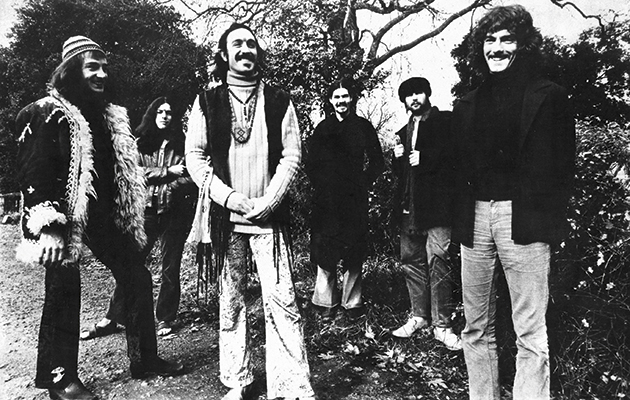 When Meredith Hunter was stabbed to death at Altamont Speedway on December 9, 1969, the story goes that the ’60s died too, the hippie dream dissolving into a less idealistic, more individualistic era. The echoes of the decade, however, could be felt long after the six had been replaced by the seven, and it’s the frame of this ‘long ’60s’ – a period which historian Arthur Marwick defines as lasting until 1974 – that Quintessence fit within.

Formed in fashionable Ladbroke Grove in 1969, this international six-piece played extended, improvisatory compositions highlighted by lengthy guitar solos, flute, sitar and communal, Indian-inspired chanting. They took on Eastern names to match their philosophies, with Australian flautist and founder Ronald Rothfield becoming Raja Ram, for example, and American bassist Richard Vaughan known as Shambhu Babaji. Far from a niche, underground concern, however, Quintessence quickly signed to Island after a major-label bidding war, and soon appeared frequently in the music weeklies, and even live on BBC2 and in Nicolas Roeg’s Glastonbury Fayre. Across five studio albums, ranging from 1969’s In Blissful Company to 1972’s Indweller, they journeyed into their own groovy mysticism, lyrically paying as much heed to St Pancras and Ladbroke Grove as to Mount Kailash and various deities.

Despite their popularity at the time, they have since slipped under the radar in recent years, being denied the resurgence of, say, The Incredible String Band, or even the credibility of weirder Eastern-inspired acts like The Third Ear Band. Spirits From Another Time attempts to rectify this, with two CDs of outtakes and alternative recordings from the vaults, many forgotten by their creators and in need of reconstruction; two cuts here even feature new guitar and vocals from Dave ‘Maha Dev’ Codling and Phil ‘Shiva’ Jones.

The results are impressive, though Quintessence were clearly at their best when they abandoned their scenester pretensions and Jones’ slightly hammy vocals, and instead launched into relaxed improvisation. Disc One’s 12-minute take of “Epitaph For Tomorrow” is stunning, a steady, subtle groove over which lead guitarist Allan Mostert is free to slowly unwind his subtle soloing, his instrument increasingly affected by echo and wah-wah effects; “Body” similarly embarks on some swinging guitar improvisation, while opener “Notting Hill Gate” moves from exhortations of meditation and “getting it straight” into peals of echoed flute and buzzing sitar. What’s most striking is the restrained, almost ambient manner of their sound, presumably aimed straight at enlightenment rather than hedonism.

If Quintessence’s music is at times too time-stamped, and lyrics like “celestial wine filling you with divinity” too gauche for the cynical decades that came after, perhaps now, with the continuing resurgence of new age music and renewed appreciation for the likes of the Grateful Dead, is the right time again to appreciate these overlooked cosmic adventurers.