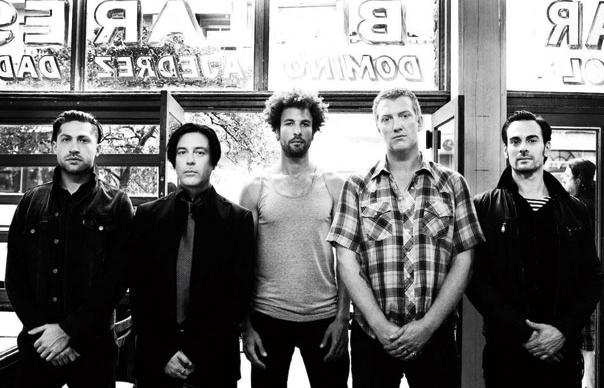 It opens with a clunk, and the rattle of chains being cast off. An overly literal metaphor, maybe, but fitting for the liberation finally won by Queens Of The Stone Age with their first album in six years. As singer/songwriter and guitarist Josh Homme described the recording, “We went through a particularly dark period in the last couple of years, trying to figure out what it all means and how to get through all that. In some ways, artistically and mentally, it was like waking up in the middle of nowhere. This record was finding a way out from there.”

The “all that” refers to the difficulties of picking up a premier-league band again after so long an absence, and how a group as distinctive as QOTSA might tackle album number six. The process can’t have been made any easier by their move from Interscope, or the departure during recording of long-term drummer Joey Castillo, whose stool was then occupied by Dave Grohl and Jon Theodore, formerly of The Mars Volta. Homme’s comments imply that this record is as much about process as end product, but process doesn’t shift copies or secure high-rotation airplay. QOTSA’s glowering, fat-free hybrid of alt.metal, riff-centric heavy rock and desert blues has always done both very successfully, so keeping those demands in mind while they felt their way in the dark might explain why … Like Clockwork (the title is surely ironic) is the sound of the band oddly, albeit entertainingly unsettled.

Purist fans of their self-styled “robot rock” should resist the temptation to hold a glittering guest list responsible. If any other band were to call in Sir Elton John and Jake Shears as well as the more usual suspects – in QOTSA’s case, Mark Lanegan, Alex Turner, Nick Oliveri and Trent Reznor – it would suggest an attack of constitutional nerves, but Homme has always been a big fan of the broad collaborative mix. And several of these new songs are very different in structure and approach, as well as detail. The brutally clipped rhythms, seductive, saw-toothed melodies and grungey textures still figure, but they don’t define the record, which exposes far more of their looseness and feminised swing. “I Sat By The Ocean” and the reverb-heavy “If I Had A Tail” especially revel in the laid-back glam boogie of Homme and Jesse Hughes’ Eagles Of Death Metal.

If … Like Clockwork represents an identity wobble, it’s nonetheless a strong record on its own terms. There may be nothing here to match previous killer singles like “The Lost Art Of Keeping A Secret” or “No One Knows”, but opener “Keep Your Eyes Peeled” and first single, “My God Is The Sun” both run along classic QOTSA lines. The ear-swivelling differences appear with “Kalopsia” (it’s the delusion that things are more beautiful than they are), “The Vampyre Of Time And Memory” and the closing title track. The first is an oddball triumph featuring Alex Turner, which begins like a Bill Withers ballad and develops into a Queen/Fantomas/Ziggy mutant – an example of the new sound Homme calls “this trancey, broken thing” that emerged while the band were rehearsing for their self-titled debut album tour in 2011. That slightly dazed quality is evident on “The Vampyre Of Time And Memory”, where squirts of electronica are added to a backdrop that taps Eric Clapton, Queen and early-’70s Elton, and over which Homme croons, “I survived, I speak, I breathe, I’m alive – hooray.” Issues of uncertainty, resilience and control are also at the heart of the closing track, a watery ballad with a real emotional wallop that connects Harry Nilsson, Derek And The Dominos and Frank Ocean. He’s recognised by both his fine falsetto and his muscular, Cali-rock drawl, but the bruised baritone Homme employs for the chorus (“most of what you see, my dear, is purely for show, because not everything that goes around comes back around, you know”) reveals a striking new vulnerability.

Homme once claimed that his initial aim with QOTSA was to establish a band whose sound could be recognised within three seconds. It won’t exactly spook the horses, but … Like Clockwork might take just a little longer.
Sharon O’Connell