Regal treasures of The People’s Band. Scoff at your peril... 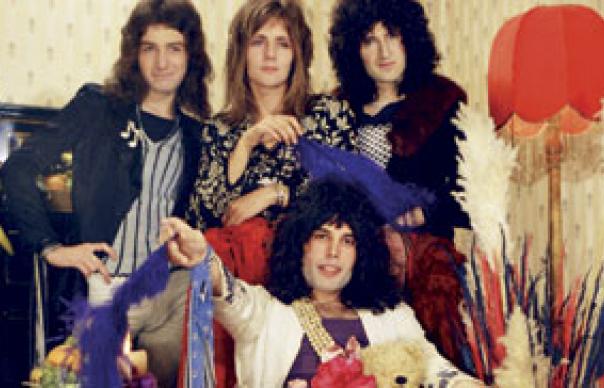 In his book Follow The Music, Jac Holzman of Elektra Records remembers first hearing Queen (whom he would sign for America, while EMI marketed them in Britain) on reels of 10-inch demo tape. “It was so beautifully recorded and performed; everything was there, like a perfectly cut diamond landing on your desk… [It was] like the purest ice cream poured over a real rock’n’roll foundation.” Holzman sent a memo round his staff, saying he’d heard the future of pop music. It was 1973. Every rock critic in the world would have laughed at him.

Some people still laugh at Queen. Silly, overblown cod-opera. Tacky as a Katie Price wedding or a trompe l’œil in a lottery winner’s lavatory. But Queen, dismissed in 1973 as a poor man’s Zeppelin riding the coat-tails of glam, battered sceptical Britain into submission by means of tenacity, eccentric singles and stagecraft. They flaunted flash like Liberace in a mink-trimmed smoking-jacket. They approached each record with the obsessiveness of true madmen. They thought ‘over the top’ was a criticism meaning ‘not going far enough’. There has never been a People’s Band like them.

Once, long ago, their albums were pored over in school corridors with gasps of excitement, like Goodies annuals or the latest Rothmans Football Yearbook. Queen (1973, ****) and Queen II (1974, ***) threw you into a fantasy world of ogres, lepers, white and black queens and giant rats. Ghoulish, sinister, they had excellent ack-ack guitar riffs from Brian May, phased to hell, which redesigned Zeppelin’s “Immigrant Song” for a “Ballroom Blitz” generation. The other trump card up their sleeve was their lip-smacking, candy-coated clusters of vocal harmonies, including helium-like screams from drummer Roger Taylor, which squirted sugar and marzipan everywhere as if Queen were building their music to the specifications of a cake.

In many people’s eyes, and I’m proud to be one of them, the first five Queen albums, released here in new remastered editions with five extra tracks apiece, are the best they made in a 20-year career. Guitarist May, in particular, is an absolute revelation if you haven’t heard this stuff in a while. “Keep Yourself Alive”, “Liar”, “Great King Rat” and “Father To Son” are full to bursting with crackerjack axemanship; you can hear the deceptively mild-mannered young astrophysicist impatiently trying to leapfrog Page, Iommi, Blackmore and the other exalted gods of the ’70s. May’s magnificent “Brighton Rock”, which opens Sheer Heart Attack (1974, ****), has a headphone-orgasmic middle section where his guitars engage in a tense gun battle (or is it a mating ritual?) across the stereo picture. His equally superb “Now I’m Here”, on the same album, is like plutonium Chuck Berry fed through the Blue Öyster Cult mincer. And notice his sublime ‘miaow’ preceding “playful as a pussycat” on “Killer Queen”. What a talented boy.

Sheer Heart Attack was a leap forward for Queen. It had a thrilling sense of lunacy: any kind of music was permissible as long as it was executed to perfection. Always an outstanding vocal group, Queen annexed unimaginable new territories by combining the butteriness of The Beach Boys, the close-harmony expertise of barbershop, the multi-octave hyperbole of The Sweet and the razzmatazz of Broadway. The sort of album that follows a blue-streak rocker (“Stone Cold Crazy”) with a lullaby (“Dear Friends”), and knows how to spit-shine its spats and dude up its shirtfront (“Killer Queen”), Sheer Heart Attack was a sign that Queen had grown too mature for gauche little fantasy yarns about ancient lands. It was still a hard rock album, and was filed as one in teenage record collections, but hindsight suggests its camp humour, filigree detail and lust for variety were closer to Sparks and Todd Rundgren than to Budgie and Bad Company.

If Sheer Heart Attack revealed Queen’s taste for adventure, A Night At The Opera (1975, *****) proved there was no limit to their capabilities. The title, borrowed from the Marx Brothers’ screwball masterpiece, justified the maniacally paced proceedings within, and just as you were getting accustomed to some agreeably evil riff, along would come an authentic recreation of Edwardian music hall, or a George Formby-esque ukulele tune, or some 1920s flapper jazz. As if confirming that its mission was to go further than Sheer Heart Attack in every way, it began with “Death On Two Legs”, a vitriolic valedictory letter to their former manager, which outstripped a similar lyric on Sheer Heart Attack (“Flick Of The Wrist”) by urging the poor wretch to commit suicide. Containing not one but two monumental epics (“Bohemian Rhapsody”, “The Prophet’s Song”), and gorging on grandiose gestures galore, A Night At The Opera secured itself instant classic status. Its sister album A Day At The Races (1976, ***), considered by some to be its equal, disappointed a lot of us at the time. Diversity or not, nothing on it compared to Bismillah and the Wise Man. Queen’s singles no longer rocked –“Somebody To Love” was like something you’d hear on The Black And White Minstrel Show – and it was time to go searching for new heroes.

Queen’s albums have been reissued over the years (and had bonus tracks included on the 1991 Hollywood CD editions), but these new remasters are recommended if you own the Hollywoods or the 1993-1994 EMI versions, as they sound much cleaner and more in-focus, with just the right amount of bass and no migraine-inducing compression. Of the 25 extra tracks, 15 were available for preview as Uncut went to press – which unfortunately didn’t include the eight-minute version of “Liar”, from a 1975 Hammersmith Odeon concert, that has been added to the debut album. “Now I’m Here” (from the same gig), appended to Sheer Heart Attack, is pretty hot, and it’s nice to hear the BBC radio recordings of “Flick Of The Wrist” and “Tenement Funster”. Do be aware, however, that some of the extras are merely vocal-free backing tracks, which may be of marginal interest only. Unless, that is, you are planning a career as a Freddie Mercury impersonator and need to get some practice in.
DAVID CAVANAGH

Q+A Brian May
Why the move from EMI to Island Records?
There were lots of legal ramblings, but basically it’s a fresh start for us. Island have been terrific to deal with. We appreciate that they’ve taken a lot of care with these recordings and made an effort to make these CDs sound good.

What’s different this time?
We were never very happy with the CD releases, and we wanted more control. So we’ve been hard at work with our technical chaps, remastering everything, and I’ve been very much involved in the whole process. I was just working on that last night, funnily enough. The exciting thing for me is that we’re trying to get them to sound more like the vinyl experience – something with punch and depth. That means going back to basics, really looking at how the sound is produced. I’m quite excited about how they look as well. And there are bonus tracks.

What new material have you dredged up?
My favourite gem is the original acetate which has on it all the demos we made prior to signing with Trident in the very beginning. This was just after we’d split up our earlier band, Smile. Nobody has ever heard these recordings before – I think I’m the owner of the only acetate in the world! These are five songs recorded with the idea of impressing record companies, done very quickly with an engineer called Louis Austin in what was to become De Lane Lea Studios. All of these songs ended up on the first album but in completely different forms. It includes a version of “Keep Yourself Alive”, which is something very special. You’re hearing Queen before anybody touched us or tried to mould us. And personally I find that rather warming, that we can rescue something so ancient and so significant in our history.
INTERVIEW: JOHN LEWIS