Polly Harvey shifts from the personal to the national... 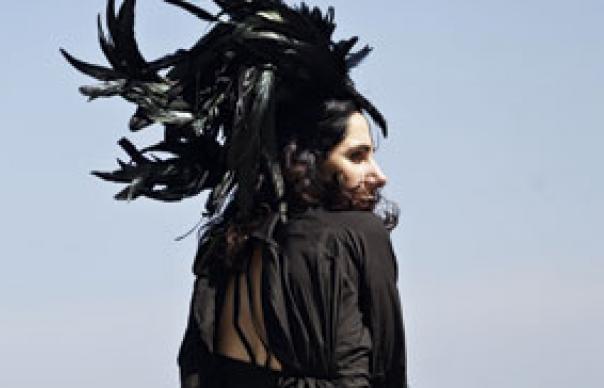 The first of Polly Harvey’s eighth studio album was heard in April 2010, when she made a memorably peculiar appearance on The Andrew Marr Show. Wrapped in a black feather boa, equipped with an autoharp, watched by an audience consisting of the titular BBC commentator and the then-Prime Minister, Harvey performed a hauntingly jaunty ditty called “Let England Shake”, backed by a looped sample from The Four Lads’ 1950s novelty hit “Istanbul (Not Constantinople)”. Even by Harvey’s formidable standards for presentational incongruity, it was one for the scrapbook.

She knew what she was doing when she chose the forum, however (Harvey, one of the more deliberate and intelligent artists to have strapped on a guitar in the last couple of decades, always knows what she’s doing). In an interview on the same programme, she explained that the new songs she was working on were more outward-looking than the soul-scrabbling ruminations which had filled her records to date, that she’d been thinking about her country, and its role in the world, and her role in it. “I know,” she said, “that the music that I make is formed out of the landscape I’ve grown up in, and the history of this nation.”

The American journalist David Remnick once made the unimprovable observation that the English were distinguished among the world’s peoples in exhibiting schadenfreude towards themselves. Harvey’s survey of her homeland observes that tendency, evoking the awkward grimace with which most middle-class English people react to the hoisting of their own flag. Let England Shake is in this respect a throwback to the more personal torments that have so far dominated Harvey’s records: her country, like the vexatious lovers who inspired Dry and Is This Desire?, is something with which she can live neither with nor without. “You leave a taste,” she informs her homeland in “England”. “A bitter one.”

Let England Shake leads with its as-heard-on-The Andrew Marr Show title track, adding a toytown symphonia of saxophone, trombone, xylophone and Mellotron to Harvey’s autoharp, and dropping the Four Lads sample. Harvey perhaps felt it was too obvious a cue for what follows. Her album-length consideration of her nation is, as it turns out, set almost exclusively in those forever English corners of foreign fields – with particular reference to the Gallipoli campaign of 1915, a misbegotten, grotesquely botched attempt by the allied forces to seize Constantinople, now Istanbul. Three of the twelve tracks (“All And Everyone”, “On Battleship Hill”, “The Colour Of The Earth”) are explicitly placed amid what Harvey accurately describes as this “death’s anchorage”, and several others could be.

It’s an odd choice of setting. The Gallipoli disaster has been so completely subsumed into the founding mythologies of Australia and New Zealand that the British contribution to the body count – somewhere north of 30,000 – is largely forgotten. Harvey’s focus on it might, perhaps, be the influence of her long-time Australian collaborator, former Bad Seed Mick Harvey – who, to judge by the lyrical command of locations and detail, may have pressed upon Polly a copy of Australian writer Les Carlyon’s magisterial history, Gallipoli (Mick takes a turn at lead vocals on closing track “The Colour Of The Earth”, inhabiting a veteran mourning a friend lost charging from “the Anzac trench”). It’s just as likely, though, that Harvey perceived Gallipoli’s echoes in more recent misconceived military adventures in the Middle East. The thread she picks up unravels to “This Glorious Land”, in which a citizen of some modern-day host of imperial hubris laments their lot (“Our land is ploughed by tanks, and feet marching”) and “Written On The Forehead”, a skilful evocation of the chaos of conquest (“Date palms, orange and tangerine trees, and eyes were crying for everything.”)

Musically, Let England Shake has in common with all other PJ Harvey albums that it doesn’t sound like any other PJ Harvey albums, which have lurched from the punky indie rock of Rid Of Me to the gothic piano balladry of White Chalk. On this one, Polly, Mick Harvey, career-long foil John Parish and producer Flood have conjured a febrile, electrified take on English folk, touched up with more straightforward rock touches. Pixies are a recurring motif, with distinctly Joey Santiago-like lead riffs lighting up “The Last Living Rose” and “In The Dark Places”. Harvey’s falsetto trills and the electric edges of the sound also remind of Cocteau Twins at their less skittish.

Though The Four Lads haven’t made the cut, there are a couple of moments where Harvey flaunts the aptitude for borrowing that she first exhibited when she helped herself to South Pacific’s “Gonna wash that man right outta my hair” on “Sheela-Na-Gig”. The aforementioned “The Glorious Land” is introduced with a sounding of the charge, introducing the looming occupiers feared by its narrator. More jarringly, but much more effectively, “The Words That Maketh Murder” spends most of its span resembling a straight-forward frontline lament, its elegantly brutal language redolent of the poetry of The Trenches, before cribbing from, of all things, Eddie Cochran’s “Summertime Blues”: in the context that Harvey has established, of terrified men cringing amid flyblown viscera, the question “What if I take my problem to the United Nations?” is a splendidly gruesome irony.

The album’s near six-minute centrepiece, “All And Everyone” may be the single most astonishing thing this consistently astonishing artist has yet recorded. Planting herself in the bloodsoaked dirt of Bolton’s Ridge, which trundles beachward from the Gallipoli battlefield of Lone Pine, Harvey summons the spectre of an overworked Reaper hovering over the remains of fallen Light Horsemen (“Death hung in the smoke and clung/To 400 acres of useless beachfront/A bank of red earth, dripping down death”). This is brave writing: many are the musicians who have beclowned themselves fearfully by attempting to describe war while knowing nothing of it.

Harvey triumphs, in this and many other respects, by disdaining the temptations of omniscience: her writing is, as it has always been, and as most great writing is, an attempt to understand something.
Let England Shake is the sound of someone as maddened as they are enthralled, aglow with anger and passion. While Harvey has been known to make albums which are more likely to be admired than loved, this is assuredly one of the latter.
ANDREW MUELLER