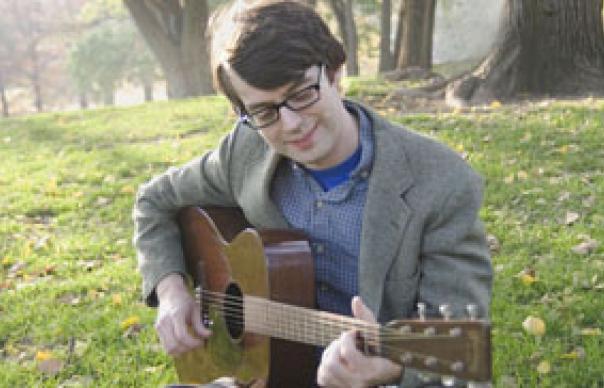 While the acid folk and new psych militia are operating all over America right now, many of the major strategists seem to be based in California. Devendra Banhart currently squats in LA, the extended Comets On Fire fraternity are based in San Francisco, and various dignitaries like Joanna Newsom and Brightblack Morning Light loiter in northern backwaters of the state.

As a consequence, the folk noise emanating from the North-Eastern side of America has a lower profile, even if the whole New Weird America schtick was probably birthed somewhere in New England or upstate New York in the mid-‘90s. A key band, back then, was the dazed and sprawling Tower Recordings, who made some hard-to-find albums (2001’s Folk Scene is the one to hunt down) before fragmenting into countless below-the-radar projects.

The best of these is PG Six, essentially a singer-songwriter called Pat Gubler who’s based in New York. Gubler has made three solo albums for the Amish label thus far. Mostly, he deals in delicate, slightly Celtic-inflected folk, interspersed with brackish psychedelic passages that privilege his wire-strung harp. It sounds rather esoteric, but 2004’s The Well Of Memory is as pretty and affecting, in an understated way, as any album from the current folk glut.

Slightly Sorry, as previewed on Uncut’s recent New Psychedelic Outlaws CD, is quite a different beast. Bert Jansch is often cited as being Neil Young’s favourite guitarist, but precious few records try and embrace their dual influence. This is what Gubler does on Slightly Sorry, a warm and beguiling mix of classic Laurel Canyon songwriting and the woodier vibes of the old world.

Consequently, the album opens with “Untitled Micro Mini”, all deft Jansch/Davy Graham fingerpicking, before “The Dance” arrives with distinct echoes of Young circa After The Goldrush. “I’ve Been Travelling”, sung by Helen Rush (another Tower Recordings alumnus) has the pastoral simplicity of Vashti Bunyan. But by the closing “Sweet Music”, Gubler is esconced at the Hammond, tapping into the rustic soul of The Band.

There’s a danger here that Gubler could be something of a bloodless gadfly, flitting between hip styles without ever finding a focus. Fortunately, his gentle, enunciated voice (reminiscent of his labelmate, Scottish folk singer Alasdair Roberts) provides a calm heart to Slightly Sorry. Gubler will never have the starchild flamboyance to match West Coast minstrels like Banhart. But on the quiet, he’s every bit as good a songwriter.