PETER GABRIEL – SCRATCH MY BACK

No guitars. No drums. Covers of Bowie, Radiohead and Elbow. Gabriel's "song exchange" opens for business 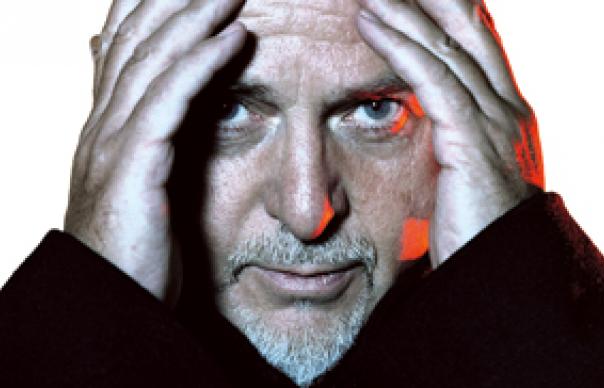 In these X-Factor times, the cover version finds itself in a difficult place, somewhere to the left of those old Top Of The Pops albums on which the day’s hits were mimicked by soundalike groups, and slightly to the right of karaoke.

Peter Gabriel’s covers album is not like that; it comes with an art concept attached, being the first of a series of “song exchanges” in which leading artists reinterpret each other’s material. If true, this is surely a good deal for Gabriel, who can expect to receive, by return of post, a Jiffy containing his own tunes reworked by Radiohead, Elbow, Lou Reed, Neil Young, David Bowie and Paul Simon.

On reflection, that album might be more surprising than this one, though it’s far from obvious that Gabriel’s own back catalogue is awash with standards awaiting creative interpretation. (The Simon Cowell hit factory is never going to retool “Sledgehammer”.)

Needless to say, these covers are not straightforward. Gabriel limits his options by opting to record with an orchestral backing, with no guitar or drums. This makes the sound wilfully sombre, particularly as Gabriel’s singing is often more theatrical than emotionally expressive: he is not, and has never been, a soul man. But this almost literary attitude also exposes the words, sometimes to great effect. Paul Simon‘s “Boy In The Bubble”, for example, is a rush of pop. Gabriel’s version has scarcely any rhythmic heft: the vocal, with sweetness excised, is plaintive and mournful, verging on desperate. Gabriel delivers it as a lullaby, cradling the words “don’t cry baby, don’t cry”, so that the days of miracle and wonder sound ominous and desperate. It’s stern, but quite lovely.

Gabriel’s approach is clinical, similar to the surgery performed on “Heartbreak Hotel” by John Cale, which removed Elvis’ pelvis, and stitched existential dread where romantic disappointment used to be. Oddly, Cale comes to mind on Gabriel’s version of Lou Reed‘s “The Power Of The Heart”, which manages to feel like a piano ballad, while also having the qualities of a Christmas hymn. The vocal is conversational, but it does sound rather as if Gabriel is delivering the message in a Welsh accent. “Heroes” is similarly effective: Bowie’s defiant, suicidal optimism is replaced by dreamy despair. Again – the sensation is less romantic, less teenage, more inflected with the weary realism of middle age.

If Gabriel is comfortable with Bowie and Lou, he’s less relaxed with more recent material. Arcade Fire‘s “My Body Is A Cage” is twice as long as it should be, overcooked, and the nearest thing to Genesis on the record, despite a Mark Lanegan/Johnny Cash style vocal. Radiohead’s “Street Spirit (Fade Out)” is played in the style of a tramp idling in a piano bar – albeit a clever tramp channelling Arvo PŠrt – while Robert Wyatt sings along in the snug. The delicacy of Elbow’s “Mirrorball” is lost in a fog of over-cranked orchestration. Bon Iver’s “Flume” is more convincing, and quite different from Justin Vernon’s recording. The original is organic, angelic, and intimately acoustic. Gabriel gives the tune a widescreen interpretation, and replaces wispy diction with crisp enunciation. It’s rather strange, and quite beautiful. My iPod shuffled it next to Nick Drake‘s “Fly”: an exact fit.

But perhaps the most effective retread is Talking Heads‘ “Listening Wind”: Gabriel removes the funk, parks the dance, and leaves the words to do the work. David Byrne’s 1980 song is a remarkable piece of narrative writing, switching between the first and third person as it follows the fortunes of Mojique, a terrorist who “holds a package in his quivering hands”, finding justification for his behaviour in the sound of the wind. And it sounds like a timeless song, written yesterday.

Q&A: PETER GABRIEL
Has the ‘song swap’ idea been in your head for some time?
It’s been hovering for a while, yes. I recorded a Vampire Weekend track and that revitalised it to some extent. But I knew that a regular covers album has been done to death and that I needed to find a way to make it fun. That’s when I got the idea of making an exchange: you do one of mine and I’ll do one of yours. I’m very keen still to push the craft of songwriting. It’s underacknowledged. For example, everyone hears “The Boy In The Bubble” with that wonderful South African backing, but you tend to forget that’s one of the best rock lyrics ever written. The day you stop learning is the day you pack up. And I’m definitely still learning.

You’ve done Elbow’s “Mirrorball”…
It’s funny, because of all the melodies I’ve heard, Elbow’s remind me of the stuff I used to do in the early Genesis days: unsingable and real buggers to get right. “Mirrorball” was the hardest track to do, by a long way. I just thought, I’ve been here before!

Why no guitar or drums on these songs?
The original concept was to make the songs stark and empty, so you’d listen to the lyrics and melody. That would allow me to function more as a singer.