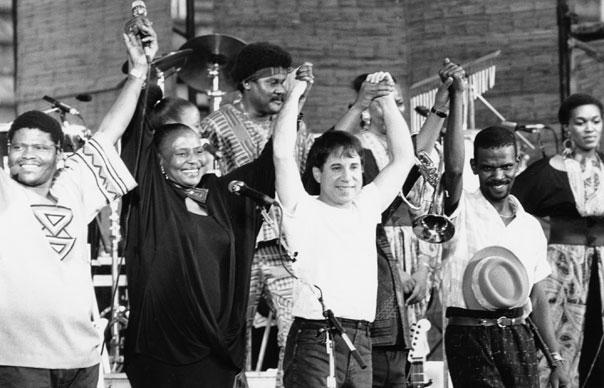 Many believed Graceland should not have been made at all. Simon’s South African journey seemed a straightforward breach of UN General Assembly resolution 35/206 ­ the admonishment, revered as holy writ by Simon’s more pious peers, to “. . . writers, artists, musicians and other personalities to boycott South Africa.” When Simon and his South African collaborators performed at the Albert Hall in 1987, the picket line included Billy Bragg, Paul Weller and Jerry Dammers.

A quarter century later, Simon’s determination to create Graceland­ if not the unnecessarily petulant defences of it he made at the time ­ seems abundantly vindicated. The Apartheid state in which Graceland was conceived had barely a decade of its squalid existence left. More to the point, Graceland became one of those records that transcends every division imaginable (more than fourteen million sold, and counting). Between Simon’s careful arranging and inquisitive writing, and the glorious performances of the musicians around him, the gaudy mausoleum at 3677 Elvis Presley Boulevard in Memphis was repurposed as a sanctuary of redemption ­ and, not incidentally, as a harbinger of the brighter possibilities of the imminent new South Africa. The only foot Simon put wrong was involving Linda Ronstadt, who had taken the Krugerrand to play Sun City, and who ­like all such ­should have been compelled to stand silently in the corner, adorned by a dunce’s cap, for some considerable while.

Simon may have been past caring. The 80s had been tough, yielding only the soundtrack album One Trick Pony and the underwhelming Hearts & Bones. Whatever Simon thought when he found himself tapping a boot to Gumboots: Accordion Jive Volume II by South African group The Boyoyo Boys, it wasn’t “Here’s my ticket back to the bigtime”. A desperation is discernible in the opening track, “Boy In The Bubble”. For all the lurching exuberance of Forere Motloheloa’s accordion, it’s a portent of apocalypse, “Bad Moon Rising” via “London Calling” (“staccato signals of constant information” remains an unbetterable description of the shortly-to-dawn online age.) The ensuing title track may well endure as Simon’s finest few minutes (he has said as much, half proud and half fearful, himself).

These two songs are unmistakeable as Paul Simon works: fidgety, wordy, angsty rather than passionate. In the context of the album, they’re hesitant dips of the toe in unfamiliar waters: the rush of immersion that follows is giddy and fantastic. The next few tracks are Simon teaching himself the rhythms and quirks of the mbaqanga music that had entranced him, and unwinding perceptibly in the process. On “Diamonds. . .“ he all but cedes centre stage to the mournful harmonies of venerable choir Ladysmith Black Mambazo, on “I Know What I Know” he’s lightened up to a barely recognizable degree, almost resembling someone performing a parody of Simon at his more mannered and earnest (“She said ‘Don’t I know you/From the cinematographer’s party?’”). By the time he reaches “You Can Call Me Al”, he’s teasing himself about the midlife crisis that prompted the Graceland experiment in the first place. If brass instruments could ever be said to laugh, they’re doing it here.

It may have been the sheer unbound joy of Graceland that jarred with so many at the time: in the 80s, South Africa was a subject that Very Serious people took Very Seriously. Apartheid was of course a monstrosity, but it would be absurd to suggest that Simon’s introduction of South Africa’s music to the world prolonged it ­and quite plausible to suggest that it did some small amount to hasten its undoing. Wisely, Simon made an intimately personal album rather than an explicitly political one, but Graceland was nevertheless a liberation.

EXTRAS: The entry-level box set contains Graceland, five bonus tracks, audio narration by Simon, three videos, live footage from Saturday Night Live and Joe Berlinger’s Under African Skies documentary. A “Collector’s Edition” contains all that plus a 1987 concert in Zimbabwe, an 80-page book and replicas of an original poster and Simon’s lyrics pad. An audiophile vinyl version includes a poster and a download card. A limited super-deluxe edition, available from Simon’s website, includes all of the above, along with a signed and numbered poster.
(9/10)
Andrew Mueller