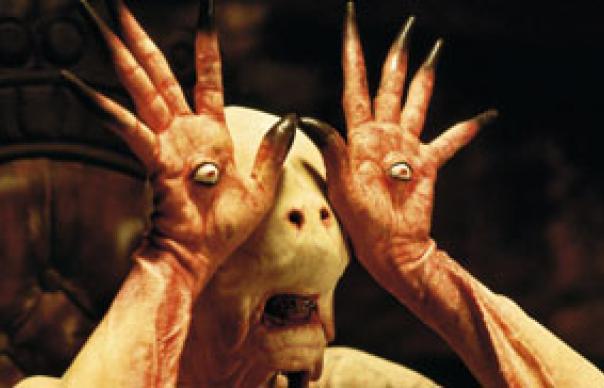 IF YOU go down to the woods tonight you’re unlikely to encounter anything quite as rich, strange or plain scary as this genre-mashing magic-realist thriller from the visionary Mexican director of Cronos and Hellboy.

Shot in Spain and set in the bitter aftermath of the Civil War, Pan’s Labyrinth is a dark cousin of Alice In Wonderland that pointedly contrasts the evils of human beings above ground with the creepy supernatural beasts below.

Ivana Baquero is terrific as Ofelia, a bookish young girl who is lured into a mysterious subterranean kingdom while her widowed mother Carmen (Ariadne Gil) struggles with her bullying new fiance, Vidal. Played by Sergi Lopez, Vidal is a sadistic Captain in Franco’s army who thinks nothing of torturing innocent villagers in pursuit of anti-fascist partisans.

Pan’s Labyrinth is unashamedly a fantasy yarn, but freighted with enough political subtext and visceral human cruelty to transcend the genre’s geekboy reputation. Admittedly some of Ofelia’s underworld digressions threaten to slow down a meandering plot, while Vidal veers perilously close to pantomime caricature. But viewed through the melodramatic eyes of a lonely girl, Del Toro’s visually ravishing fairy tale makes perfect sense, hits all the right gothic notes, and ends on a satisfying emotional crescendo.