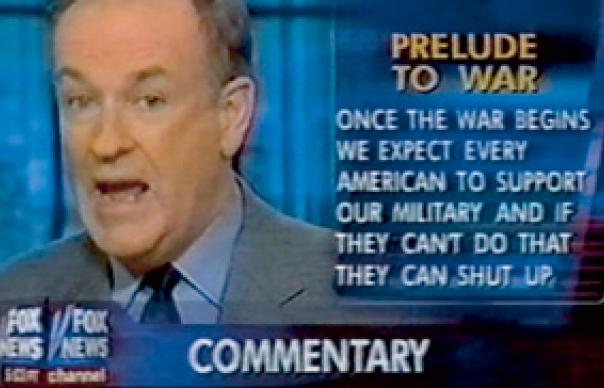 Unlike Fahrenheit 9/11, Robert Greenwald’s Outfoxed never reached American screens. A shame, as this is a more effective expose of the skewed cathode blare which misguides so many American minds. Fox News claims it is “fair and balanced”. But many disaffected ex-Fox journalists here testify to management pressure and memos flagrantly pushing a pro-Republican line. Greenwald also splices together footage which drums home sneaky devices such as presenters’ repeated use of the phrase “some people say” as a means of inserting right-wing views into newscasts.

Eighty-three per cent of Fox pundits are right-wing, the film finds, the most infamous of these being Bill “Shut Up” O’Reilly, an odious pitbull who is presented by Fox as somehow ‘neutral’. Here, we see footage of his savaging of Jeremy Glick, a 9/11 survivor – who should be canonised for not headbutting his host. Depressingly, other networks have looked at Fox’s ratings and decided this is the way to go – which is why, for instance, CBS News now has its own O’Reilly-a-like.

Outfoxed is raggedly lo-fi, feels occasionally slung together. It features too little of Murdoch, instigator of Fox’s pro-Republicanism, while its polemical momentum forbears it from making the ironic observation that Fox is also home to The Simpsons, the most subversive programme on US TV. Still, while polemical, Outfoxed is incontrovertible. Buy it and seethe.