OKKERVIL RIVER – I AM VERY FAR

Will Sheff’s apocalypse! Raucous, anthemic and their best album yet... 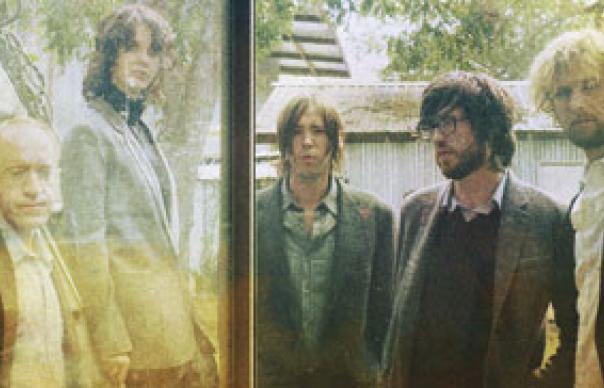 Okkervil River’s 2005 breakthrough album was an intense song-cycle called Black Sheep Boy. Written by Will Sheff during an isolated winter in rural Indiana, it was inspired by Tim Hardin, the ’60s singer-songwriter who surrendered his life and talent to a heroin addiction about which he was fatalistically unrepentant, even as it was killing him. The album was about as cheerful as you’d expect in the circumstances, which is to say, not very. It was the kind of record, however, around which cultish devotion gathers, and duly did.

Black Sheep Boy was followed in 2007 and 2008 by The Stage Names and The Stand Ins, two very different, conceptually linked albums of darkly sardonic, often cynical songs about fame, what people will do for it and what happens to them when stardom wanes or is snatched from them. Their songs were dense, allusive, touching and funny when they weren’t blatantly tragic, and full of clever pop culture references. Imagine The Rise And Fall Of Ziggy Stardust And The Spiders From Mars, written by David Foster Wallace, and you’ll be halfway to an understanding of them. They were also the most musically expansive things Okkervil River had so far done, echoes everywhere on them of Dylan, the Stones, The Velvet Underground, the Faces, Motown and Bowie.

I Am Very Far, the band’s first album in nearly three years (they took time off to work with Roky Erickson on 2010’s True Love Cast Out All Evil, which Sheff produced) sounds on first acquaintance like a return of sorts to the charred territories of Black Sheep Boy and the sometimes gruesome murder ballads that were scattered across its predecessors, Don’t Fall In Love With Everyone You See and Down The River Of Golden Dreams. There are bodies everywhere on I Am Very Far, most of them with their throats slit, a recurring image.

The record, though, is no gloomy compendium of gothic melodrama. The instances of individuals visited by violence quickly become emblematic of a wider woe, a world on fire, catastrophe looming, a dystopian outlook it shares with parts of Bowie’s Aladdin Sane and the whole of Diamond Dogs. Like Bowie, Sheff makes the apocalypse sound dangerously exciting, almost sexy, certainly not something you’d want to miss. There’s a lot that’s raw and exclamatory about this music, a kind of demented exhilaration, especially on the tracks recorded with what Sheff describes as the ‘giant’ Okkervil lineup assembled for these sessions, featuring two drummers, two electric basses, two pianos and seven guitarists, all playing in unison and recorded in single takes. The noise they make is thrilling. “Rider”, the first of these tracks, is like “Panic In Detroit” re-tooled in the anthemic manner of Springsteen or Arcade Fire – a bold unfurling, a majestic racket.

The tense, alliterative “White Shadow Waltz” (which seems to refer back to “Savannah Smiles” on The Stage Names and “Starry Stairs”, its sequel on The Stand Ins) and the incantatory “We Need A Myth” are similarly rousing, something feverish and hallucinatory about them. There’s an interlude on the latter, flooded with strings, that’s overwrought in the irresistible style of some of the things Jimmy Webb wrote and arranged for the actor Richard Harris on his A Tramp Shining and The Yard Went On Forever albums.

There’s a sense of reverie running through the album, too, as if dreams are being remembered or lived through, memories of better times glimpsed among current ruin on “Lay Of The Last Survivor”, “Hanging From A Hit”, “Your Past Life As A Blast” (appropriately reminiscent of Dylan’s “Series Of Dreams”), and “The Rise”, which nobly closes the album, Okkervil River’s best yet.
Allan Jones