Oasis – Lord Don’t Slow Me Down 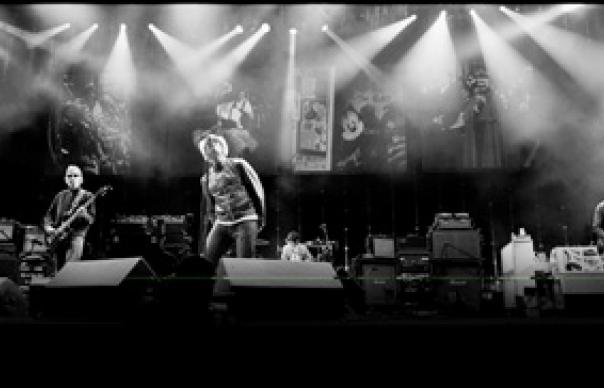 Put it down to the long hours spent in the company of ’60s obsessives Andy Bell and Gem Archer, or Noel Gallagher’s recent confession that he’s started reading books, but Oasis’ eye for detail continues to impress. If the artwork for Stop The Clocks – overseen by Sir Peter Blake, no less – was an impressive piece of pop-art revisionism, Lord Don’t Slow Me Down is equally conceptual – a black-and-white documentary housed in an illustrated, monochrome cover boasting epithets (“Workers Of The World Relax!”) worthy of Richard Neville’s countercultural handbook, Playpower.

The aim, clearly, was to create a tour movie with the gravitas of Anton Corbijn’s Depeche Mode travelogue, Document, while reasserting Oasis’ position as champions of the retro-rock flame. Not that Lord Slow Me Down – filmed during the band’s 10-month world tour in support of Don’t Believe The Truth – pulls any punches. Instead, we get to see the Oasis rock’n’roll touring machine as it really is; a mix of motorways, anonymous hotel rooms and promo duties where boredom is only alleviated by the wild mercury of two hours on stage.

No longer is access to the Oasis dressing room a shortcut to a supermodel-friendly take on Byronic excess. Here, it’s at its most animated during a game of ’70s boardgame Frustration (Noel wins, inevitably), while the sober, pre-gig silences prior to enormo-gigs at Madison Square Garden and the Hollywood Bowl speak volumes for their priorities as they approach 40.

Instead, it’s left to touring partners Kasabian to provide any semblance of rock looning, as Oasis amuse themselves any way they can – playing pitch’n’putt, watching football on TV or, in the case of Liam’n’Noel, bickering about everything from Tom Cruise to who runs the band. Even a boozy backstage party featuring performing midgets is curiously restrained, the band’s Dionysian days a dim and distant memory. “It’s been a great year, and this time we’re old enough to appreciate it,” admits Noel. “I can’t remember anything from ’95 or ’96.”
No Cocksucker Blues, then. Yet such candour allows us a rare insight into how two brothers from Burnage managed to become one of the biggest bands in the world.

“Im glad I’m back at work,” announces Noel during one spate of promos – a telling rebuttal of Thom Yorke’s rock star petulance during Meeting People Is Easy – and Liam’s refusal to see his life as anything other than that of a lottery winner remains central to their appeal. When he’s next seen whizzing around Sydney Harbour in a speedboat, drunk as a skunk, you begin to see why. “Oasis is straightforward – there’s no frills,” reflects Liam when asked to reveal the secret of their appeal. Indeed. The days of being “caught beneath the landslide” may be long gone, but Lord Don’t Slow Me Down is proof that Oasis’ wayward spirit remains intact.