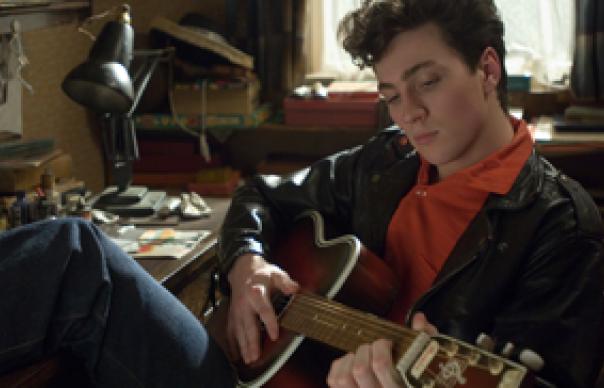 Incarnating the young John Lennon was always going to be a high risk enterprise for Sam Taylor-Wood and her leading man, Aaron Johnson. As a first time director and Turner Prize winner, the former was suspected of being too much the arty ingenue for a story that would be scrutinised by armies of Beatles obsessives. The latter, no John lookalike, was also onto a hiding, given the inevitable comparisons with Ian Hart’s salty, brilliant Lennon in Backbeat, and the challenge of growing onscreen from gawky 14 year old schoolboy to tough 18 year old art school teddy boy. That’s without the small matter of inhabiting the tortured psyche of one of pop’s few bona fide geniuses.

It’s perhaps against the odds, then, that Nowhere Boy proves a joyous success. At its heart is a vibrant performance from Johnson, who captures the intensity and contradictions of the teenage Lennon, a vulnerable middle class boy magnetically drawn to the vulgarities of skiffle, Elvis, greased hair, sex, beer and brawls. We follow John through his teenage rites of passage; the friendship with fellow ne’er-do-well Pete Shotton, shoplifting records, gropings in the park with a beehived girlfriend, expeditions into Liverpool’s seedy docklands, and, of course, the formation of The Quarrymen, proto-Beatles rattling out Lonnie Donegan and Eddie Cochran at church fetes.

Nowhere Boy is less a biopic, however, than a drama centred on the unusual circumstances of John’s upbringing, namely the conflict between the chilly conformism of his Aunt Mimi (Kristin Scott-Thomas), who raised him from an early age, and the vivacity of his mother Julia (Anne-Marie Duff), a good-time girl who taught her son to play banjo and endorsed his rock ‘n’roll fixation.

The oedipal quality of John and Julia’s relationship is probably exaggerated, as is the suggestion that John was barred from seeing his mother – biographer Philip Norman describes ‘unrestricted time’ with her – yet scriptwriter Matt Greenhalgh (who wrote Control) convincingly describes the psychological terrain. When Mimi snaps at John, “She’ll hurt you, you know that,” the sting is sharp.

It’s a good-looking creation, shot by Seamus McGarvey (who worked with Taylor-Wood on Atlantic) mixing grainy realism with lyrical flourishes, notably at dockside and seaside. The attention to period detail is scrupulous (though you’d be hard pushed to find Ike Turner’s “Rocket 88” in 1950s Blackpool), and the musical set-pieces are defty, convincingly handled. Only the depiction of Paul McCartney (Thomas Sangster) strikes a less than convincing note. The co-dependance and rivalry between John and Paul is there alright, but Sangster is too stiff, too slight to play the mercurial, cocksure foil to John’s angst and aggression. Nonetheless, Nowhere Boy delivers a definitive account of Lennon’s pain-wracked adolescence.