Hook, Sumner, Morris – and Cunningham – return revived and reinspired in their 25th year 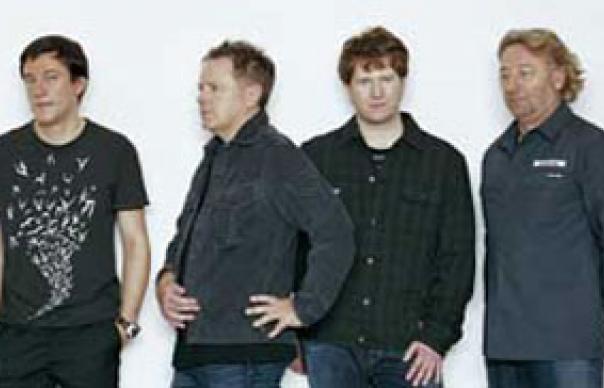 Like battleships or hurricanes, New Order albums traditionally have classical, stately, one-word titles. So 2001’s slack Get Ready seemed like an admission that they were still warming up after that decade apart. Borne aloft on critical goodwill, in retrospect the record sounds tentative and rudderless, with special guests in place of strong ideas.

But then the original New Order didn’t hit their stride straight away. Returning with guitarist Phil Cunningham in place of the retired Gillian, on lead single “Krafty” they sound relaxed and reinvigorated, self-composed rather than chasing trends. With its breezy, kiddy-Kraftwerk electraglide, the song lent some substance to the rumours that Waiting… was to be a return to the pinnacle of Technique – the band’s most prescient rewiring of rock dynamics with dance technology.

Ironically, the songs most blatantly aimed at the dancefloor may be the weakest. Stuart Price (aka Jacques Lu Cont, whose remixes make no secret of his fandom) is one of four producers – Stephen Street, John Leckie and the band themselves – and his two contributions “Jetstream”, featuring Scissor Sister Ana Matronic, and “Guilt…” are bizarrely lifeless exercises.

In fact, Waiting… makes more sense as an emotional, rather than a sonic, sequel to Technique. Although the earlier record was a magnificent, flawless piece of machinery, its charm lay also in the fact that it was kind of a holiday romance, a pilled-up, Ibizan Grease.

You might listen to Waiting… as an update on that chemical romance, 15 rocky years into the relationship. The most affecting songs here are about second chances, reaffirming commitments and the terrible seduction of straying. Sumner has rarely sung better and “Dracula’s Castle” and “Turn” feel like older, wiser revisions of “Run” or “Fine Time”. The title track, meanwhile, is a superb example of the surging, bittersweet grace of classic New Order, at once Apollonian and mordantly English.

With one or two exceptions – the daft Egyptian Ragga of “I Told You So”, and the sub-Stooges closer “Working Overtime” – it’s a remarkably coherent, consistent record. This may seem like faint praise for a band who once veered so flukily between the divine and asinine. But if nothing here is quite touched by the hand of God, then maybe it’s all the more engagingly human.