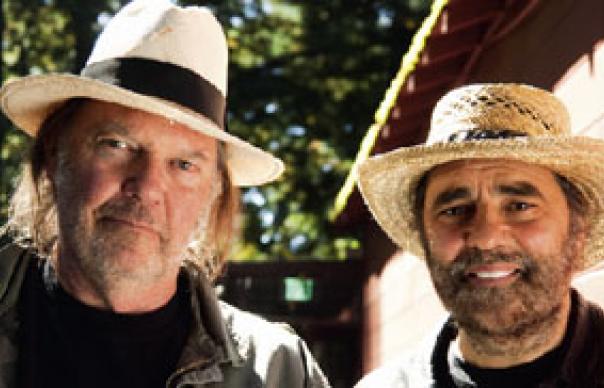 “There’s nothing else out there like it,” Daniel Lanois recently said of Le Noise, which he produced. He was talking up the album’s singularity, as if what he has helped bring about here departs radically enough from the many ways we have heard Neil Young to date to be considered somehow alien or at least alienating. It’s a point of view, I suppose, but only plausible, really, if you are prepared to overlook, ignore or otherwise find ways of not counting a fair-sized rump of what’s preceded it from Neil Young’s back catalogue.

The music Neil’s made across five decades has been nothing if not polymorphous, his career a protean procession, whose narrative arc has been prone to digression, mutation, constant change. He has been over the last 40 years and more the psychedelic pioneer of Buffalo Springfield, moody loner, brooding rocker, protest singer, bucolic balladeer, film-maker, deranged obituarist, disenchanted superstar, fabulist story-teller, country crooner, redneck patriot, winsome troubadour, rockabilly rebel, synth-popper, big-band bluesman, cynical satirist, noise-art terrorist, and now a reflective veteran of close-to pensionable age.

On Le Noise, he is at different times all of these things, as if this record is in some ways a summation of sorts, something he has been heading inevitably towards, a kind of Big Bang in reverse. You could say that on Le Noise, Neil Young is everyone he has ever been. At the same time, for all these many years of musical shape-shifting, the different and disparate musical duds he’s worn, he’s never sounded like anything less than himself, unmistakable in any of his incarnations, and perhaps never more like Neil Young than he does here.

Le Noise was made at Lanois’ LA mansion, in a room set up specifically for the record, which was taped live and features just Neil on electric and acoustic guitars and vocals steeped in reverb. There’s no bass, drums, keyboards or any other instruments. The songs were captured in one or two takes, with no subsequent overdubs, which often gives the LP the raw immediacy of something like Tonight’s The Night or the more raucous bits of last year’s Fork In The Road.

Even by the standards of other previous Neil albums on which his electric guitar playing has ventured into spaces unknown, notably Eldorado and the soundtrack for the Jim Jarmusch film, Dead Man, the guitar sounds engineered here by Young and Lanois are astonishing, almost terrifying at times in their elemental beauty. The great gusts of noise they contrive are as far removed from the winsome prettiness of, let’s say, Prairie Wind as you can get, but still beneath all the spitting, crackling and hissing recognisably part of the same whole, a song here like the hugely affecting “Sign Of Love” easily imagined in a more decorative setting, with pedal steel, perhaps, fiddle and the banks of acoustic guitars common to Comes A Time or Harvest Moon.

Clued-up Neil fans will recognise six of the album’s eight tracks from bootlegs and video footage of the recent Twisted Road tour, after which the album was originally titled. These same fans will also wonder what happened to “Leia” and “You Never Call”, songs performed on the tour but absent here. With its references to the recent passing of two of his closest friends and collaborators – LA Johnson and Ben Keith – “You Never Call” would perhaps have cast a distracting pall over an album that for all its fraught anxiety and sense of past, present and future woe is eventually noisily uplifting.

The album opens with “Walk With Me”, a declamatory thing, Neil addressing either a loved one or the universal ‘you’ of his audience, the many faithful who have followed him thus far and are now in this passionate exhortation invited to join him on what may be the final leg of a long and legendary journey, from youthful idealism to a grey-whiskered end. “Sign Of Love”, which has one of the album’s most brilliantly bone-crunching guitar sounds, is a declaration of a love strong enough to survive the deprecations of passing time. “Someone’s Gonna Rescue You”, with its pulsing riffs, is a hymn of reassurance, a promise of salvation from temporal terror and doubt.

The first of the album’s two pivotal acoustic masterpieces is “Love And War”, built around a pretty Spanish guitar figure. The song reflects ruefully on a lifetime of emotional conflict and watching young men being sent off to die on the world’s battlefields, from Vietnam to Afghanistan and Iraq, the underlying gist of which gives voice to the tender notion that in a world of violent turmoil love is the only amnesty.

“Angry World”, written at the behest apparently of a pissed-off fellow drinker in one of Young’s local bars, is slight by comparison, but musically again packs an almighty wallop, his guitar sounding like something blistering in uncommon heat. “Hitchhiking” is a song first aired on his 1992 solo shows and now finally recorded. Explicitly autobiographical in the manner of say, “Don’t Be Denied” from Time Fades Away, it’s a drug odyssey that matches whatever narcotic Young was ingesting – and there’s everything here from hash, through speed and downers to cocaine – to the parallel path of his often tumultuous personal life and career, which he has only survived, he avows in a newly written final verse, thanks to his “children and faithful wife”, and their steadfast supportive affection.

“Peaceful Valley Boulevard” is the album’s second acoustic epic. A song in the tradition, if you like, of “Ambulance Blues”, “Powderfinger” and “Cortez The Killer” that spans centuries, starting in the Old West and taking in the despoiling migration of white settlers into the western heartlands of America and the destruction that advanced with their wagon trains of the people who lived there and the land that supported them. Later verses lament the continuing poisoning of the planet and the haplessness of a coordinated global response to the ruin being wreaked upon the world. “Who’ll be the one to lead this world, who’ll be the beacon in the night?” he asks forlornly, his voice surprisingly frail here, the high notes just out if his reach.

The album ends with “Rumblin’”, which recalls the apocalyptic predictions of the wrathful “LA”, also from Time Fades Away, an anticipation of something fearful about to happen, a stirring of probably destructive energies presaging the final eclipse of all hope and every wonder.
Le Noise is the sound, then, of Neil raging against the dying of the light, life’s inevitable dimming, but going nowhere quietly.
Allan Jones