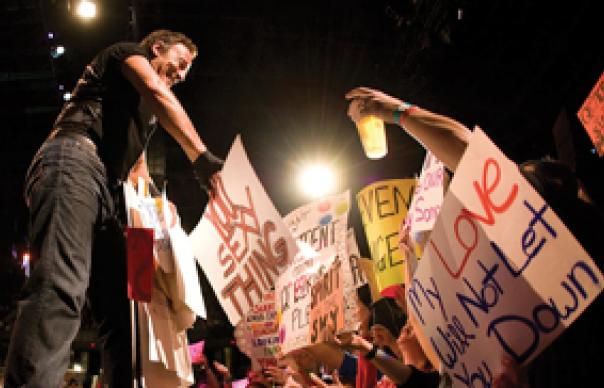 “Somebody get me an elevator, I’m fucking 60,” roars Bruce Springsteen half-an-hour into this gargantuan live set, recorded in Hyde Park during summer 2009’s Working On A Dream tour.

Lost in the throes of a seemingly endless rendition of “Out In The Street”, he’s wandered down into the orchestra pit to bounce, strut and meet the fans, and now he doesn’t have the energy for the steep climb back to the stage.

That doesn’t stop him heading down to the pit three times more during the three-hour show, but it does encapsulate the experience of seeing Springsteen on stage with the E Street Band. They’re energetic and effervescent, determined to have fun, keen to get near the audience even when playing in a field of 50,000 people, and reluctant to make too many concessions to age.

This is the third E Street concert Columbia have released on DVD this decade (it follows New York in 2001 and Barcelona in 2005), so the observant may be able to spot some subtle alterations to Springsteen’s stagecraft over recent years. Gone are the epic kneeslides of yore, which would take him right across stage from Clarence Clemons to Stevie Van Zandt, and gone too are those moments when he elects to sing a song while hanging upside down from the mic stand like a rock’n’roll bat. He is “fucking 60”, you know. Other than that, Springsteen’s all over the stage like a rash half his age, a contrast to statuesque contemporaries like Neil Young and Bob Dylan. You never get a half-assed show from The Boss – just watch the sweat stain spread across his charcoal shirt until the whole thing is drenched black by the end of the night – and that’s what makes his concert films so involving. There’s always something going on.

The film opens abruptly, with the band on stage about to launch into a chunky cover of “London Calling”. The idea is good – and Bruce even looks a little like Joe Strummer – but the song is too constraining, too constipated, to suit the E Street Band, who follow it up with “Badlands”, which loosens them up like a dose of Epsom Salts. You can sense the relief spreading across band and audience, as the camera sweeps from stage to crowd. Suddenly, there’s space for Roy Bittan’s piano, such a key component, and they are into their stride. What constantly impresses with the E Street Band is the relentless pace they maintain while staying focused, and here they quickly find a rhythm that they scarcely relinquish for the rest of the classic-laden set (“She’s The One”, an elegiac “Racing In The Street”, “Jungleland”, “Glory Days” and “Dancing In The Dark” all get an airing in a 26-song set). Even “Born To Run” passes almost unnoticed in the blur of energy. Almost. The truth is, you couldn’t hide that song if you painted it grey and buried it in the middle of a herd of elephants.

Springsteen has been a regular in London recently, playing different settings. Fans have been able to see him do a solo acoustic set at the stately Royal Albert Hall to promote Devils & Dust, or turn a church into a folk jamboree for the spritely Seeger Sessions. But it’s the E Street Band that really put bums on seats with the audience interaction the band bring to each show. Sure, there’s the call-and-response from stage to audience (“London!”, “Broooooce!”, “London!”, “Broooooce!”), but it’s the other touches that count, whether it’s taking the mic into the crowd to get a young boy to sing the chorus of “Waiting On A Sunny Day”, or gathering up audience members’ handwritten requests and taking them on stage, before carefully working through the songs fans have scrawled on cardboard and bits of paper. (Or at least pretending to, the setlist almost certainly having been prepared well in advance.)

Even Springsteen’s one misstep – a gospel preacher routine about hope and love that doesn’t sit easily with a British crowd – is done with such well-meaning intensity the crowd take it in good faith. Happily, it turns out to be the preamble to the night’s highlight, a triptych on the world economy that begins with an angry reading of live favourite “Seeds”. After that comes a swaggering country version of “Johnny 99”, and a ferocious “Youngstown”. This is typical Springsteen, anger rather than pessimism, conviction rather than surrender.

Three tracks from the end of a set comes the hoe-down “American Land”, as a London night descends. The band each take a solo, and The Boss namechecks every member before leading them down into the orchestra pit for a last walkabout, a sweat-stained Pied Piper who never wants to stop. Sixty? Fugeddaboutit.