Muddy Waters & The Rolling Stones – Live At The Checkerboard Lounge 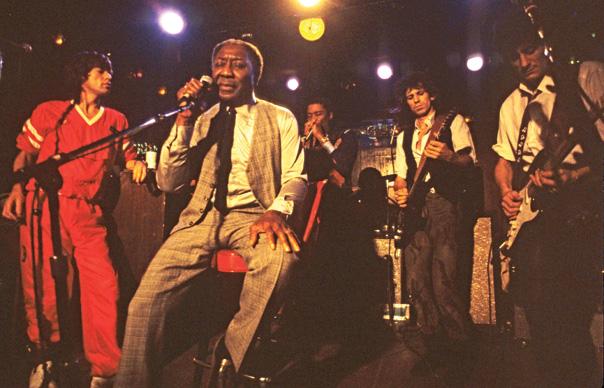 Aside from sitting humbly at the feet of Howlin’ Wolf on ’60s TV shows like Shindig and Ready, Steady, Go!, footage of the Stones with their seminal blues influences is rare. Recorded in November 1981, just a couple of years before his death, this Muddy Waters performance at Buddy Guy’s Checkerboard Lounge remains the only time the group ever actually shared a stage with the iconic blues master.

Muddy’s band are spruced up for the occasion – waistcoats are de rigueur, except for pianist Lovie Lee, who’s wearing a nice black and white cardigan and matching cap, while blues-harpist George ‘Mojo’ Buford sports a fetching leather bandolier to house his harmonicas. Muddy himself appears a few songs into the set, in a light-grey three-piece, the remnants of his once mighty pompadour swept into a matching steel-grey monkish tonsure at the rear of his head. Even perched on a high stool, he’s a majestic, magisterial presence, wringing snarling slide lines from his battered old Telecaster on “Country Boy“, in flurries of stinging, biting slashes.

Invited up onstage during “Baby Please Don’t Go”, Mick Jagger has rather less stylish couture sense, his red Ellesse jogging-suit making him appear all the more like Muddy’s court jester as he attempts his characteristic prancing in a space barely big enough to stand in. Keith joins him, clambering over the tables to reach the stage, followed by Ronnie, both guitarists clearly on their mettle for this trip to the fount of blues truth.

Mick and Muddy swap verses through “Hoochie Coochie Man”, “Long Distance Call” and “Mannish Boy”, the tiny stage getting ever more crowded as more blues legends join the throng, notably Junior Wells and Buddy Guy, who beams the smile of the club-owner who knows he’s got the best show in town tonight. Mick tries talking in tongues on “Mannish Boy“, before Muddy and he vacate the stage awhile, leaving Keith and Ron, ciggies akimbo, to swap lines with Buddy Guy. The evening comes to a suitably unkempt ending with “Champagne & Reefer”, Mick nipping in right at the close to steal Muddy’s thunder with an admonishment to stick to reefer and stay away from that cocaine. As if!
EXTRAS: None.
Andy Gill