Sham 69 meets David Icke! The work on an artist in blinkered decline 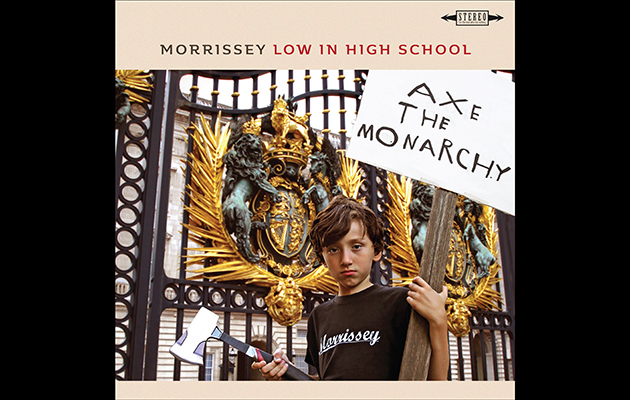 “By not dying young, Morrissey robbed the world of a great artist.” One tweet in the aftermath of the latest outrage – rueing the failure of UKIP to go full-bore fascist – captured the feeling of a generation of betrayed fans. If only he had been struck down, you sense the devout wish – perhaps onstage with the Smiths in Newcastle in January 1986 on the Red Wedge tour, The Queen Is Dead already safely in the can – the legacy would be untarnished and he might be fixed in the same iconic aspic as Ian Curtis.

Truth is, Morrissey’s career has been all about sailing too close to the wind, a long, provocative courtship of offence. From the very start he was putting a laugh track on a song about the Moors Murders, singing about molesting students, swoonily celebrating 13-year old cop killers and lamenting the failure of the IRA to assassinate Margaret Thatcher. There has never been a righteous, right-on centrist dad Morrissey you could comfortably disassociate from the unhinged extremity. The lurid paranoia, stifled desire, splenetic resentment and hysterical vengefulness fuel both the fever-pitch romanticism and the vile politics.

Listening to Low in High School though, his first record since he broke his own landspeed record for alienating labels with 2014’s abortive World Peace Is None Of Your Business, you wonder if the bilious rhetoric becomes more emphatic as his artistic power wains. While the earlier album showed renewed gallows intensity, this is in many ways his weakest album since Kill Uncle.

“Spent The day In Bed” is certainly an inauspicious lead single. Though the Roxyish keyboards are refreshing, the chorus “Stop watching the news!” feels symptomatically artless and didactic. There’s some irony in the way that the stubborn refusenik of the 1980s – no videos! No synths! – has become the one indie artist to flourish in the 21st century clickbait torrent of pop, where your impact can be calculated by your thinkpiece pagecount. But too much of LIHS could be summarised, without much poetic loss, in a bullet list of talking points:

Fake news
The world burns
But I have discovered oral sex
…And did I mention I received the Freedom of Tel Aviv?

Confusingly, the album is often musically splendid. After a stolid decade in a chugging rut, producer Joe Chiccarelli brought new colour to the Moz soundworld on WPINOYB, and here he impressively marshals contributions from four cowriters in the Morrissey band. The album rumbles in with brassy swagger on the Mando Lopez cowrite “My love, I’d do anything for you”, like The Sweet chancing their arm at a Bond theme. It feel like it should be a statement of intent a la “You’re gonna need someone on your side”. But instead of squaring up for a scrap, Morrissey announces himself with “Teach your kids to recognise and despise all the propaganda / filtered down by the dead echelon’s mainstream media”. As an opening couplet, it’s less rousing state of the nation address, more like Sham 69 hopped up on David Icke.

Again, “I Wish You lonely”, courtesy of Boz Boorer, sounds great, with curdled synths and thudding bass like something from the first Magazine album. And here at least Moz attains some urgency, advising you to eschew the dependencies of fealty, romance and heroin and instead aim for the existential heroism of “the last tracked, humpbacked whale, chased by gunships from Bergen – but never giving in!”.

But things go badly off the rails with “I Bury The Living”. Morrissey has never been shy about his Buffy Sainte-Marie fandom, and here he pays fulsome tribute by writing his own version of “Universal Soldier”. While that tune is as pious as most protest songs, it does at least implicate the listener in some collective responsibility. “I bury The Living” by contrast is witless thud and blunder, bemoaning “honour-mad cannon fodder” for seven and a half minutes. It capsizes the album, which struggles to recover.

It is nevertheless an interesting way of leading into a second half that is largely preoccupied with sexual frustration in Israel. While on paper that sounds like a promising combination, in practice it doesn’t really get off the drawing board. “In Your Lap” is typical, using the Arab Spring as little more than a cheap backdrop, and for the meagre frisson of rhyming “Wipe us straight off the map” with “I want my head in your lap”. The “Girl From Tel Aviv” is possibly even more facile, forgetting its protagonist almost immediately to take a breezy tour of the post-Iraq middle east before glibly concluding “What did you think all these armies were for? / The land weeps oil.” “Who will save us from the police?” meanwhile, simply concludes on a coda of “VENEZUELA! VENEZUELA!” with all the subtlety of a Tory minister warning of the perils of social democracy.

In the midst of this “All The Young People Must Fall In Love” is a cute piece of Boz Boorer jug band light relief, advising romantic quietism and not worrying about the government, even as the Presidents plot apocalypse.

The final “Israel”, however, is just baffling. It’s a portentous dirge, accompanied by a familiar, ludicrous litany of Catholic complaints (“Dare enjoy your body? / Here tolls Hades’ welcome bell!”), interspersed with a sighing chorus to the Holy Land. Is this what becomes of our onetime post-punk provocateurs? Learning Hebrew, taking booze cruises to TLV and retiring into indolent anti-Islamic senility?

“Jacky’s Only Happy When She’s Up On The Stage”, a scathing piece of self-reflection disguised as character study suggests Morrissey is at least aware of his career predicament. After sketching the narrative arc to date (“Scene 2: everyone who comes must go / Scene 4: blacker than every before / Scene 5: this country is making me sick”) he concludes “Exit! Exit! / Everybody’s heading for the exit!”. Whether he’s turning his audience away with his views or with records as weak as this, it looks like a self-fulfilling prophecy. The Morrissey story surely deserves a finer final act.