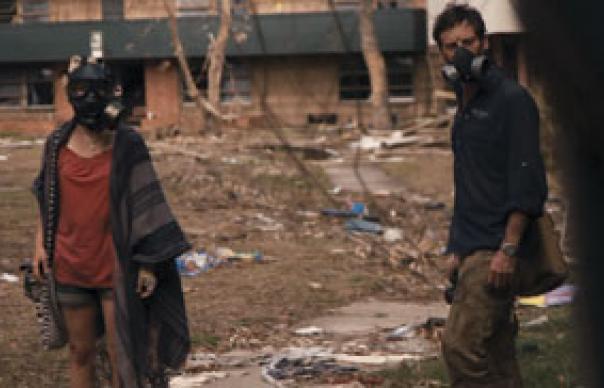 It might be possible to see Monsters as a British equivalent to District 9, but its values are less big-budget sci-fi than meandering indie romance, with added aliens. Think Predators meets Before Sunrise, or perhaps Cloverfield meets In Search Of A Midnight Kiss by way of the Lonely Planet guide to post-apocalyptic central America. And the budget really wasn’t big. Incredibly, Monsters was made for around half a million dollars – which you’d imagine would barely cover the costs of Avatar’s catering budget. For all James Cameron’s trumpeting about a 3D revolution, this efficient little movie could turn out to be the real game-changer of the year.

Monsters begins six years after a NASA space ship carrying samples of alien life crashed between the US and Mexico. A walled-off “infected zone” has been created to contain these aliens, which resemble giant walking octopuses. Scoot McNairy plays an intrepid hipster photographer charged with escorting the daughter of his American boss back home from Mexico. Despite the fact she looks like a supermodel, he sees her as an inconvenience; he’s more interested in getting some lucrative alien snaps. Inevitably, close encounters are on the cards, in both senses. After a crash-bang opening, we don’t see all that much of the aliens until the very end, but there’s evidence of them all around. The landscape is strewn with crashed planes, derelict buildings and billboard-sized warnings to stay the hell away – and much of the suspense boils down to strange sounds emanating from jungles. That might disappoint genre fans looking for action, but Monsters establishes a rhythm of its own, and a credible scenario to go with it.

So how did they do it so cheaply? Part of the explanation is that Monsters’ writer/director, Gareth Edwards, has a background in visual effects and practically created the CGI stuff on his laptop. They also shot it guerrilla-style with a four-person crew in real-life central America, which only needed a few CGI tweaks to double for the near-future, it turns out.

Edwards’ effects background is the movie’s curse as well as its blessing, though. Our earthling leads are slightly less convincing than the giant octopi. Their improvised dialogue is often unilluminating, their chemistry undetectable. Nor are the movie’s wider points about immigration handled with finesse. “It’s like we’re imprisoning ourselves,” the lovers say, looking out at the huge border wall from atop a Mayan pyramid. “Like, duh!” we reply. The movie takes a predictable line on the US being militaristic xenophobes while the aliens are misunderstood and peaceful – a lot like Avatar, in fact. Still, the visual elements are consistently attractive, and the whole affair deserves credit simply for doing something different. In terms of a calling card, Edwards has done more than enough to deserve our attention. But if he’s going to really change the game, he’s going to have to up his own.
Steve Rose
Steve Rose