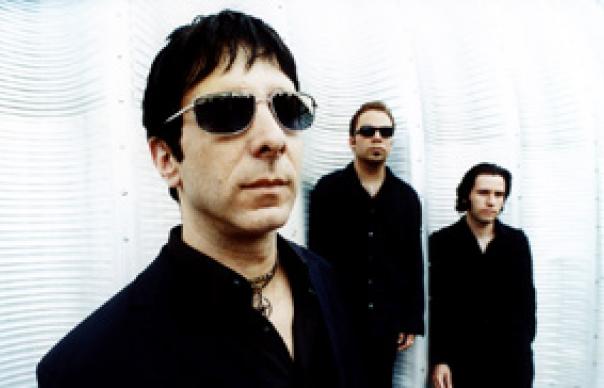 Follow-up to 2001’s All Is Dream, recorded in the band’s Kingston studio by the core Rev trio of Jonathan Donahue, Grasshopper and Jeff Mercel.

What a long strange migration Mercury Rev’s has been. From the intemperate chaos of their early days to the dark power and elegance of their work since See You On The Other Side, few comparable cases of successful sonic metamorphosis exist in the past decade. “Ah, bands, those funny little plans…” that sometimes, just sometimes, work out right.

Those of us who clung to Jonathan Donahue’s and Sean “Grasshopper” Mackiowiak’s coat-tails as they broke on through to the “other side” of Mercury Rev in 1995 could afford to be blasé about the beauties of 1998’s Deserter’s Songs. See You’s “Everlasting Arm” and “Racing the Tide” had already taught us that the two men were true musical alchemists of cosmic Americana. Along with the Flaming Lips’ Clouds Taste Metallic, Sparklehorse’s Vivadixiesubmarinetransmissionplot and Grandaddy’s Under the Western Freeway, See You presaged a bold new dawn of swirling melody and faux-choirboy singing.

Rescued from penury by V2’s Kate Hyman, the Butch Cassidy (Donahue) and Sundance Kid (Grasshopper) of the Catskills were all but forgotten entities when Deserter’s Songs stunned the world in ’98. But Donahue, a shaman among drab rock disciples, was always going to outpace the tide of Britpop bores and become the dark star he is.

A lean magus resembling a kind of sexy Peter Stormare, Donahue’s blend of tenderness and menace was exactly what rock’s doctors ordered after the moribund mid-‘90s. Along with the Lips’ 1999 masterpiece Soft Bulletin – ex-Lip Donahue surely being the introvert Wayne Coyne – Songs was the irresistible antidote to crass Britpop: ethereal, exultant music for ears deadened by sex’n’drugs’n’guitars cliché.

But Mercury Rev did it differently to the alt.country retro merchants. Rather than retreat into some back-porch banjo idyll, they created a para-psychedelic version of front-parlour Tin Pan Alley/Broadway fantasia. Inspired by the mountains around Kingston and Woodstock, Deserter’s Songs wasn’t country but it certainly wasn’t urban either. It was music out of time, music for ghosts played on defunct instruments before being hot-wired for indie-rock consumption. Influenced not by Dylan or the Byrds but by cult figures like Van Dyke Parks – check the Harper’s Bizarre of the Parks-arranged “High Coin” (1967) for the proto-Rev matrix – Deserter’s was at once quaint and mind-blowing.

The quaintness was still there on 2001’s All Is Dream, but the mood this time was darker, more overtly steeped in Donahue’s occult obsessions. Here serpents lurked, monsters surfacing from the depths of bad dreams. “The Dark is Rising,” announced the opening track. A Rev show I saw at London’s Electric Ballroom was frighteningly powerful.

Three years later Butch and the Kid have returned with yet another magnificent opus – a “dark country ride” in the company of a “dark country bride”. The Secret Migration is nothing less than a journey through Rev(erie) and a cycle through the seasons of upstate New York.

More than anything, Migration is a hymn to nature – to mystery – at a time when materialist artifice threatens to destroy our planet. “Diamonds” is pastoral bling, with Donahue offering jewels of sun-reflecting raindrops and bracelets draped from spiders’ webs – “gifts that you won’t forget” and that all of us should treasure. “Black Forest (Lorelei)” plunges us into dark woods of ancient myth. The soaring “Vermillion” notes an “unseen force behind the turning leaves”; the heartbreaking “My Love” sees “someone behind the scenes” pulling the strings of seasonal change.

To a melody worthy of vintage McCartney, “First-Time Mother’s Joy” exquisitely observes spring’s rebirth after harsh winter. On the Spector-esque “In a Funny Way” – an unconscious nod to Jack Nitzsche, intended producer of All Is Dream? – Donahue lists the everyday items of his back-of-beyond existence: fields and streams and lakes and “all my dogs”. Once again Donahue and Grasshopper, abetted by drummer/keyboardist Jeff Mercel, pull us into their unapologetically lush dreamworld. “On a wave of emotion, sending ships across yer ocean,” Jonathan warbles on the ecstatic second track, “I’ve lost all my reason(s)”.

Melodically The Secret Migration is closer in feel to Deserter’s Songs than to All Is Dream: it’s less sinister and more glowingly radiant than that sometimes nightmarish record. If the album blasts off with the surging “Secret for a Song” – “The Funny Bird” revisited, or near enough – guitar power is thenceforth less paramount. There are newish textures here: electric piano on “Diamonds” and “The Climbing Rose”, rumbly new-wave bass on “Arise”. Keyboards of all kinds are ubiquitous. By their own admission, the band opted not to resort so much to the usual orchestral apparatus. For the moment the bowed saws are in storage.

But Mercury Rev’s power is undiminished. While never resorting to crude hooks, they build melodies to peaks of graceful intensity. “Across Yer Ocean”, “Vermillion” and “My Love” are especially gorgeous. If there are any quibbles at all, they’re with the track sequencing: I’d have separated the slow “My Love” from the charmingly hopeful interlude that is “Moving On” and maybe used the latter to break up “The Climbing Rose” and “Arise” (the album’s least engaging song). But a quibble is all that is. By the time The Secret Migration concludes with the short, shimmering hymn that is “Down Poured the Heavens”, you feel you’ve undergone a mildly life-changing experience.

After a year in which true musical magic has been thin on the ground – I’ll take the swishy Scissor Sisters over the arch Franz Ferdinand but I long for pop that transcends pastiche altogether – Mercury Rev return us to a realm of spirit we’ve all but lost touch with. Their songs celebrate the irrational, the domain of feelings beyond words. To cite Tolkien, The Secret Migration is a precious thing indeed.