Bristol outfit back to their best, assisted by Damon Albarn, Guy Garvey, TV On The Radio and more. 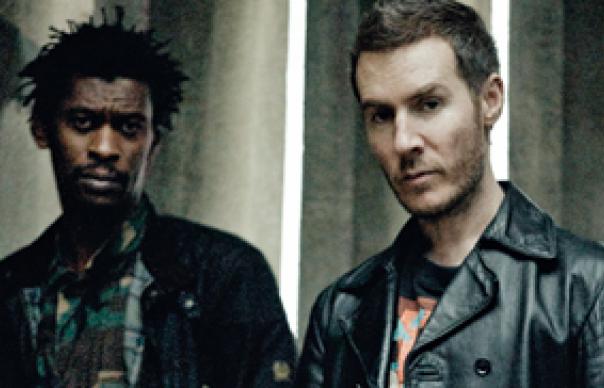 Massive Attack are not just here for the nasty things in life, but so often it seems that they are. With the country mired in recession and the prospect of a Tory government installed by the summer, conditions are ripe for the arrival of Heligoland. This is the Bristol crew’s first new LP in seven years and, like a battleship launched in the dead of night, it’s greeted with that mix of trepidation and curiosity reserved for every major Massive release. Their hometown trip hop peers Portishead and, to a lesser extent, Tricky have staged notable comebacks. Now, surely, after a decade mooching in the shadows, it’s Massive’s turn.

Even by their standards, Heligoland, which is named after the German archipelago of two tiny islands in the North Sea (and also resembles phonetically, and in some ways spiritually, “Hallogallo” by Neu!), has been a long time coming. But then, everything this glum duo do comes laden with baggage. One senses that for Robert ‘3D’ Del Naja and Grant ‘Daddy G’ Marshall, making a record (together) is a struggle, that, poor things, theirs could well be the toughest job in the world.

Certainly, Massive Attack appeared to be going through the motions on 2003’s 100th Window, a cinematic, acutely paranoid set smothered by surly electronics and bereft of big names, that sounded far removed from the group’s funkier, soundsystem roots. That album was effectively a Del Naja solo affair – Marshall left the group around 2001 to raise his daughter – and its claustrophobic feel reflected 3D’s interest in composing film scores. When Marshall returned in 2005, they began sessions for Heligoland, recording with a number of artists including Mike Patton, Beth Orton and Elizabeth Fraser, none of whom have ultimately ended up on the album.

The intention, perhaps, was to make a more ‘human-sounding’ record, or at least to return to producing the kind of dramatic futureproof soul that excited them in the first place. By whichever means they finally got there – their curatorship of last year’s Meltdown festival may have spurred them on – Heligoland has turned out to be a tremendous record. Not since 1994’s Protection have Massive Attack sounded quite so vital or unusual. Listening to the array of styles, from the Jim O’Rourke-like folk of “Psyche”, laced with Martina Topley-Bird’s cosmic incantation, to “Splitting The Atom”‘s opiated rocksteady or Hope Sandoval‘s dusky ballad, “Paradise Circus”, it’s conceivable Del Naja and Marshall needed every minute of those years to concoct such alluring material.

Still, it’s the roll-call of weatherbeaten indie stars who appear on Heligoland that provides a lot of the appeal here. There’s Damon Albarn, sleepily croaking on the record’s prettiest moment, “Saturday Come Slow”; Elbow’s Guy Garvey, flanked by blips and drones, purrs ruefully on “Flat Of The Blade”; and Tunde Adebimpe adds his voice to the industrial grind of opener “Pray For Rain”, which bursts into the kind of sunny Beach Boys middle-eight of which Animal Collective are so fond. Long-time collaborator Horace Andy, his voice sweeter than ever, attends to “Girl I Love You” with more than a hint of malice. Propelled by a low-end rumble and lashed with wavesof surging brass – imagine Jason Pierce producing Portishead – this must be one of the defining Massive tracks.

The sound of a group at the very height of their power, flexing their ample muscle, Heligoland is the album Massive Attack had to produce for fear of fading further from relevance. Now we can all learn to love them once again.