MADELEINE PEYROUX – STANDING ON THE ROOFTOP

Spartan but rewarding collection from the flighty New York chanteuse... 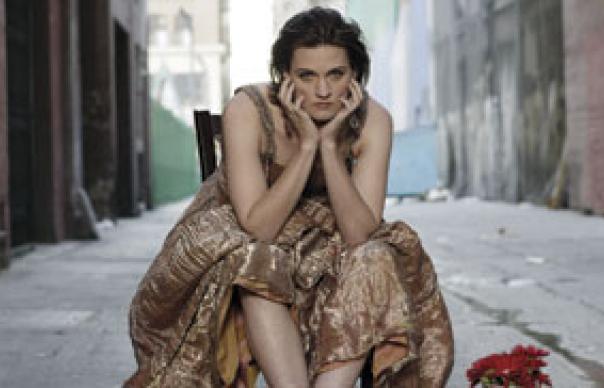 Freedom is important to Madeleine Peyroux. Relocated from New York to Paris as a teenager after her parents’ divorce, she soon dropped out of school for a life travelling Europe singing Fats Waller and Bessie Smith songs. An acclaimed 1996 debut, Dreamland, didn’t stop her turning her back on record company wrangles in favour of busking, and even after two best-selling albums of cover versions – 2004’s Careless Love and 2006’s Half The Perfect World – she became notorious for her unnannounced ‘vanishing acts’.

“I love my freedom,” she croons on “Leaving Home Again”, one of 11 original songs on Standing On The Rooftop, an album that, like 2009’s Bare Bones, affirms Peyroux’s talents as a songwriter as well as a gifted interpreter. Once again she’s worked with a variety of co-writers – New York colleagues, mostly, but Bill Wyman helped out on a couple of numbers – though at the album’s heart are Peyroux’s frank, poetic lyrics, beautifully animated by her smoky, sensual voice.

Rooftop also shows Peyroux is is prepared to take risks. The retro-jazz stylings of earlier LPs – brushed drums, polite piano – are still in evidence, but most of Rooftop’s material has more challenging arrangements. Cleverly produced by Craig Street, best known for his work with Norah Jones, it’s an album rich in atmosphere, its often spartan feel shaped by such talents as freelance guitar magician Mark Ribot and piano legend Allen Toussaint.

On the safe side of the tracks comes the opener, a droll, banjo-plucked take of Paul McCartney’s “Martha My Dear” that’s pleasant but undemanding. The same goes for “The Kind You Can’t Afford”, written with Wyman, which playfully taunts a rich wannabe lover – “You got art collections, I got comic books” – without supplying a killer hook. From there the album builds into something more intense. “Leaving Home Again” is a breezy celebration of liberty, while “The Things I’ve Seen Today” strikes a more poignant, nocturnal note, for, as on Bare Bones, the best numbers are small-hours torch songs, introspective and regretful. Here Peyroux rues that “good times seem so poor”.

“Lay Your Sleeping Head, My Love” sets WH Auden’s celebrated poem about the transience of intimacy to an intricate acoustic backing that’s touched by brass, and Peyroux delivers its fragile sentiments with precision. The oft-made comparisons between her high vocal style and Billie Holiday’s aren’t inaccurate, but her delivery here shows how far Peyroux has moved on from her influences.

The title track deepens the story brilliantly, its brooding, sawing strings spangled by Ribot’s echoing guitar while Peyroux looks across the city at dawn, wired, alive, reflecting on her triumphs and losses. “Never seen a morning clear as this,” she soars. Her take on Robert Johnson’s “Love In Vain” transforms the much-versioned blues into a spooky statement of remorse, a real highlight, against which Dylan’s “I Threw It All Away” proves disappointingly routine.

The remaining songs – there are 15 in all – mostly provide relief from the heartache. A tongue-in-cheek “The Party Oughta Be Coming Soon” laments that “Louis Armstrong’s getting too sad to blow” to Toussaint’s agile piano, and “Don’t Pick A Fight With A Poet” is as larky as its title suggests. “Ophelia” complicates the mood with its mystic immersion into the Mississippi waters – it’s about womanhood’s changing role, says the singer – but “Meet Me In Rio” and “The Way Of All Things” take us out on a chugging, upbeat note. It’s a well-judged mix; safe enough to satisfy the easy-listening end of Peyroux’s following, but bold enough to show that among the jazzy, post-Norah crowd, the wayward Maddy stands apart.
Neil Spencer

Q+A Madeleine Peyroux
You’ve been working with a new producer.
I wanted to make an album on different terms – this one is even self-financed – and in New York, where I live, with local musicians. Craig reached out at the right time. It was serendipity, like getting Allen Toussaint, who happened to be in town.

And you’re writing with different people.
Four of the songs are all mine, two are with Bill Wyman, and the rest include Marc Ribot, who wrote the music for the Auden poem. The record is very much an ensemble piece.

Auden’s a bold choice. So is Robert Johnson’s “Love In Vain”.
Craig pointed out it was Johnson’s anniversary. I grew up with his music, and cover versions don’t always do him justice. Blues can be complex, that’s why we gave it an orchestral arrangement, without guitar.

Who are you listening to?
I just saw Shutter Island, which introduced me to music by John Cage and György Ligeti. Modern classical music will be very important for the 21st century.
INTERVIEW: NEIL SPENCER