Anti-climactic third album from the warrior queen of radical cheek... 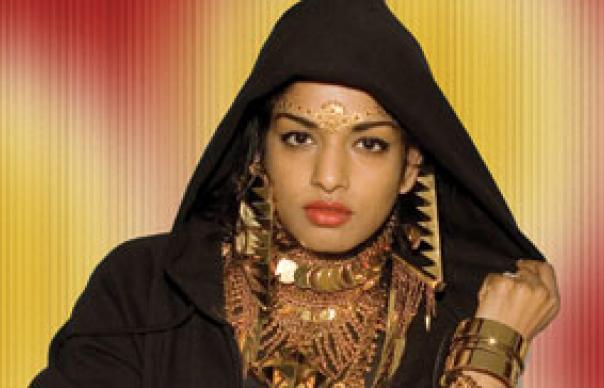 Onstage at the Grammys in 2009, nine months pregnant and performing her breakthrough “Paper Planes”, MIA seemed to be claiming the spotlight as she’d long seemed destined to.

Riding the Hollywood soundtrack synergy of Slumdog Millionaire, the song irresistibly summoned the damned spectre of The Clash’s “Straight To Hell” in the context of globalised gangsta rap, catching the perfect balance between the hint of subversion and the sound of success.

Up to this point she had often been more of an internet controversialist or conceptual artist than a genuine pop star; now she’d found her stage, how would she perform? The pop-art child of both Madonna and Malcolm McLaren, would she turn out to be radical insurgent or careerist playa? Her next album would surely be her most crucial, the moment when the power and purpose of MIA really came into question.

Maybe the contradictions in her art and ambition paralysed her, or maybe she just got stagefright, but ///Y/ turns out to be MIA’s weakest LP yet, caught between conformist pop sketches and gestures at a radical past. The title seems symptomatic. Having named her 2005 debut Arular after her father’s Tamil nom de guerre, and the 2007 follow-up, Kala, after her mother, it’s only logical that the artist formerly known as Mathangi Arulpragasam should name her third album after herself, ie Maya. But the self-confident assumption of one-name pop iconhood is tempered by its rendering in the cryptography of computer hackers covering their tracks.

Before her visa application was turned down, MIA had intended 2007’s Kala to be a US hip hop album recorded with Timbaland and Blaqstarr. Prevented from entering the US, she recorded on the fly in India, Trinidad, Liberia, Jamaica and Australia, and it was largely this delirious breadth of reference – from Tamil urumee drums to Bollywood soundtracks, from Trinidadian soca to east London grime, Aboriginal chants to indie-kid classics – that made it so irresistible.

In comparison ///Y/ was recorded largely in MIA’s new LA mansion and suffers from diminished horizons. The first half of the album shapes up as the club record Kala might have been: “Steppin Up” is all sawtooth and sub-bass with MIA lamely bragging “You know who I am, I run this fuckin’ club”. Lead single “XXXO” is a bloodless piece of club synthpop that feels, with its references to tweeting, iPhones and role play, like a Lady Gaga b-side. And while she’s her equal in terms of controversy, in attempting to ape Gaga’s impeccably classicist pop chops, MIA is always going to come off second best. More galling, “Teqkilla” would love to be some Missy Elliott crunk hymn to hard liquor, but in 2010 comes across as chasing the drunk-girls dollar.

Where MIA escapes the club and returns to the wider world, there’s an overwhelming sense of diminishing returns. Teaser single, the Suicide-sampling kiss-off “Born Free” feels like it’s playing catch-up with, of all people, Primal Scream, and was hardly helped by an asinine censor-baiting video. “Lovalot” was supposedly inspired by Islamic Dagestani teen Dzhennet Abdurakhmanova, who suicide-bombed the Moscow Underground in March after Russian government forces killed her militant husband. But any reference to her story doesn’t seem to extend further than lyrics that rhyme “Taliban trucker” with “eatin’ boiled-up yucca”.

Funnily enough, ///Y/ is strongest at its softest. “It Takes A Muscle” is a cute, pitch-shifted lovers rock cover of an obscure single by early-’80s Dutch synthpop crew Spectral Display. “Tell Me Why” samples a psych-pop chorus that sounds oddly like Animal Collective and taps into a post-Obama disillusion with the lines “things change but they feel the same”.

The closing “Space” attempts to mash up the spirit of Bowie’s “Space Oddity” with Primal Scream’s “Higher Than The Sun”, finding vertiginous bliss in cutting loose from the networks of Google and the government. “My lines are down” she trills, thinly autotuned “you can’t call me”. Is this the liberty she sings of on “Born Free”? Being free to leave your mobile switched off, ditch your broadband contract and chill with your entourage in a Beverly Hills mansion? Maybe this is the way MIA’s contradictions are resolved – not with an apocalyptic bang, but with a self-satisfied whimper.
Stephen Troussé