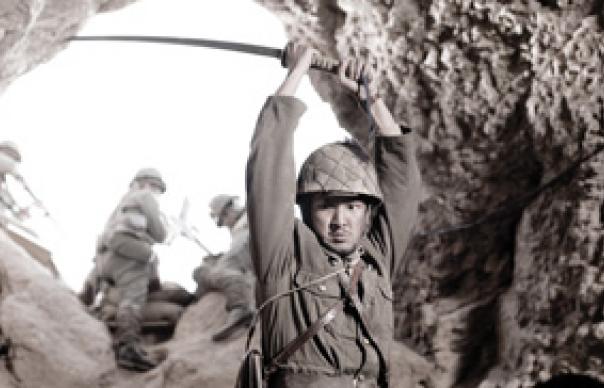 General Kuribayashi takes command of the defences of Iwo Jima, a strategically important Pacific island 520 miles south of Tokyo. Aware that the victory is impossible, he orders the men to dig a network of tunnels; he means to fight to the last man, delaying the Americans for as long as possible. Yet many of his officers are outraged: tactical withdrawals are considered dishonourable, they would rather commit seppuku. Several soldiers reflect on their fate over the long, brutal and hopeless battle.

There’s a scene in Flags Of Our Fathers when the US marines hear a series of muffled explosions, then break into one of the enemy tunnels dug into Mount Suribachi. Thy’re appalled to find the obliterated corpses of an entire squad of Japanese soldiers, just minutes after they’ve blown themselves up. Letters From Iwo Jima replays that incident from the perspective of Saigo (pop star Kazunari Ninomiya), an enlisted man who’s horrified by his comrades’ suicidal zeal, and who makes his escape before the Americans arrive. Saigo is no one’s idea of a hero, certainly not his own, but he’s the heart and soul of this movie, a grim reverse angle on WWII’s bloodiest battle and the militaristic nationalism that decreed there should be no Japanese survivors.

Few movie stars have interrogated the nature of heroism as doggedly as Clint Eastwood over the years, but whatever else he may have left to say on the subject, Letters From Iwo Jima could prove to be his masterpiece. Even more monochromatic than Flags…, Letters… resonates with the themes in the earlier film, deepening and darkening our sense of young men wantonly sacrificed in the name of the state.

In some ways this is a more straightforward picture, but not to its detriment. Beginning a few months before the US landings, it proceeds in linear fashion as General Kuribayashi (sympathetically played by Ken Watanabe) takes stock of a dire situation. Vastly outnumbered, denied reinforcements and air support (the Imperial Fleet has been decimated some months before), the Japanese have no chance of victory, even as they cling to the myth that the ruthlessly disciplined Japanese soldier is worth ten of his US adversaries. Ironically, his men’s readiness to throw away their lives – to embrace death before dishonour – is the biggest hindrance to Kuribayashi’s plan to make the Americans fight for the last inch of ground. Either way, Saigo loses.

Iris Yamashita’s screenplay draws on published correspondence from the general and imagines letters from Saigo to his wife in Tokyo, a device that allows us to understand them as men, not just military pawns (in Kuribayashi’s first voice over, he’s apologizing for not having seen to the kitchen floor). This is also the key to the film’s mood, which hits the same rueful and reflective tone you find in Unforgiven, Bridges of Madison County and Million Dollar Baby… all films about the dying of the light.
Directed with simple fluency and grace, Letters from Iwo Jima illuminates a desperately dark historical episode with rare insight and conviction.

If Hiroshima is never mentioned, you might discern the shape of things to come in the ashen black sands of this volcanic outcrop. There is no triumphalism here, that famous flag-raising is relegated to the briefest long shot. This is a somber, moving, profound film that insists above all on the value of life itself.