Goodtime Brooklyn rockers, back with their sixth and best 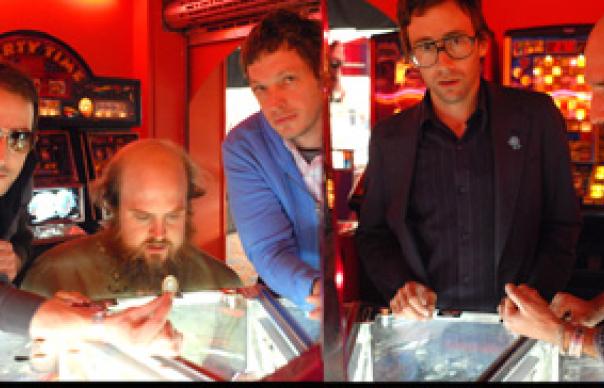 It’s been twelve years since Brooklyn quartet Les Savy Fav formed at Talking Heads’ alma mater, The Rhode Island School Of Design, and although their last release (a compilation of limited-edition early singles) sold 100,000 copies, they’re still most celebrated for their live shows.

The focal point of these is bearded singer Tim Harrington – a rotund man who invariably starts shows dressed as a pirate, but ends up naked – but it’s small wonder that the motto on their website is “missing out on cashing in for over a decade”. Though a joyous group, they’re also an overlooked one.

Hearteningly, that’s set to change. With Let’s Stay Friends, LSF find themselves sharing a UK label with long-term fans Bloc Party. Their first album for six years, meanwhile – during which time Harrington launched a range of home furnishings – also makes a bold bid to be the album of the year.

Like friends The Hold Steady (who released their first two albums on bassist Syd Butler’s Frenchkiss label), LSF are a goodtime bar band, albeit one with Springsteen fixation replaced by the off-kilter energy of Fugazi, the sleek electro-pop hooks of New Order and some Cheap Trick style power-pop thrown in for good measure.

Essentially, this is a band who manage to conjure an anthemic chorus out of the unlikeliest material – songs about abduction (the pseudo-disco of “Patty Lee”), sex with female showjumpers (single “The Equestrian”), and the Black Death (“Raging In The Plague Age”). Vocal contributions from the Fiery Furnaces‘ Eleanor Friedberger and nu-folk Zelig Devendra Banhart are buried in the mix alongside members of the general public – the band set up a phoneline and taped fans singing into the ansaphone.

It’s this kind of approach that will serve LSF well in the longterm: keeping their fanbase included while holding down full-time jobs, and producing the best music of their career. It’s a welcome return, to say the least.

UNCUT: What does the album’s title refer to?

TH: “It’s about energy and optimism and the need to hold on to those things. We’re long-haul optimists: the band has always strived to avoid being jaded.”

What are you lyrical inspirations?

“I really admire people who can just sing ‘yeah baby!’ – poetry can be weakened by cliché but lyrics are strengthened. I want to do that, but in the end there’s very few “yeah”s or “baby”s. Instead there’s songs like ‘Raging In The Plague Age’, which is about the king being kicked out of his castle and his subjects drinking his wine while he dies of the Black Death.”

You all still work full-time jobs…

“We didn’t want to put out this record until we were sure it was our best – having jobs meant that we were able to make it on our own schedule. The dream is to be the biggest band in the world, but for everyone to still have dayjobs.”