A prodigious talent finds new intensity on her third album 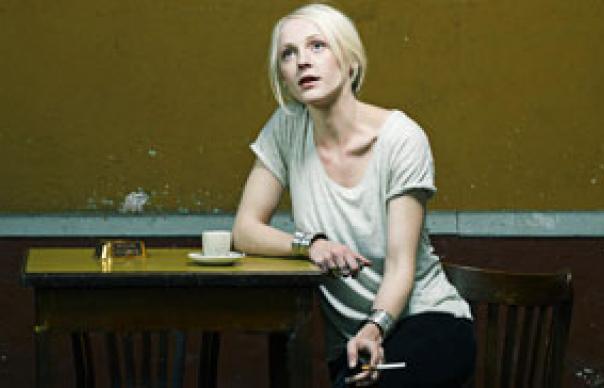 Laura Marling was born in Hampshire in 1990, the year of the Stone Roses at Spike Island, of Ride’s Nowhere, of the gathering wave of grunge – post-Bleach, pre-Nevermind – beginning its roll towards the mainstream. Yet she might just as easily have been born in Brooklyn in 1950, or Liverpool in the 1980. From the moment Marling emerged, aged 18, with her remarkably assured debut, Alas I Cannot Swim, her music seemed to float high above the specifics of time, age and place.

Friendships (and romances) with members of Noah And The Whale and Mumford & Sons, who backed Marling on her second album, I Speak Because I Can, ensured she was filed alongside the new wave of Brit-folk, but her story is less neat and more interesting than that. A young woman with a voice of solid silver rather than fine gossamer, her youthful precocity was backed up by opaque, literate songs. That Marling owed a debt to a long line of poetic singer-songwriters was clear, yet she possessed not only the stamp of originality, but also the sense of someone making music not simply because they could, but because they had to.

I Speak Because I Can (2010) traced Marling’s move towards womanhood with a cool, clear hand. Like her first it had moments of greatness and was almost excessively lauded, yet among the plaudits the suspicion lingered that the praise was as much for what Marling could be as what she actually was.

Her third album allows little scope for such equivocations. In the 18 months between I Speak Because I Can and A Creature I Don’t Know, Marling has moved from her late teens into her early twenties, a period of significant and accelerated growth. Now 21, there’s a powerful sense of her music keeping pace with her life. A Creature I Don’t Know feels like a more wayward, somewhat wanton older sister to her first two records. It pulls at the hems of her music, musses its hair, smudges its lipstick. The musical and vocal inflections are mostly American; the vibe looser; the rhythms more adventurous. In short, the bookish pallor of old has taken on a distinctly golden hue. And it suits her.

A new playfulness leaps from the opening two songs, which are almost skittish. “The Muse” skips along on a jumpy, jazzy rhythm, all banjo, piano rolls, scratchy brushes and splashing cymbals. “I Was Just A Card” is a similarly upbeat piece of Cali jazz-folk, and would simply be a parody of peak-period Joni Mitchell – the same pure falsetto, the same rattling open tuned guitar, the same ingeniously meandering structure – were it not done with such skill and verve.

What’s immediately apparent is that Marling’s vocals have become more stylised, more soulful, more sexual, more assured. She switches from musky jazz elisions to tart spoken asides, from a mischievousness that recalls Mary Margaret O’Hara to the plainly rendered purity of Natalie Merchant. There’s even a touch of Rufus Wainwright’s theatrical grandstanding on the rousing Bierkeller chorus of “Don’t Ask Me Why”, a Spanish-inflected ballad which drifts into “Salinas”, a bluesy, bawdy affair about a mother with “long blonde curly hair down to her thigh”.

This vocal adventurousness reflects the increased dynamism of the music. If her previous records tended towards cool and aloof, Marling, producer Ethan Johns and their admirably supple group of musicians ensure that A Creature I Don’t Know feels several degrees warmer without sacrificing any intensity.

These 10 songs are peopled by a rich cast of recurring characters – mothers, muses, sons, lovers, shape-shifting creatures – all of whom seem forever on the brink of something terrible. “The Beast”, a looming minor-chord crawl, is a six-minute exorcism of some violent, carnal urge. It begins as a whisper and rises to a nightmarish crescendo, guitars growling, drums like thunder on the mountain. Sonically it’s more PJ Harvey than Laura Nyro. Lyrically, Marling appropriates Judee Sill’s unsettling mix of the sexual and spiritual.

The beast also makes an appearance in “The Muse” and “Salinas”, but ultimately remains undefined. Marling isn’t keen on absolutes. She enjoys playing with the language of intimacy but shies away from the overtly confessional. She comes closest to revelation on “Night After Night”, five minutes of the artist alone with her gut string guitar and her darkness. Initially the song sails so close to Leonard’s Cohen’s “Famous Blue Raincoat” that when she sings “You were my speaker, my innocence keeper” the listener might be tempted to harmonise with “What can I tell you, my brother, my killer”. The song gradually stretches into the coming dawn, becoming almost indecently tormented – “my love is driven by rage” – as it does so. It’s a spell, an incantation, a confession which never quite makes clear exactly what’s being confessed. It might easily be the best thing she has ever done.

“Rest In My Bed” is similarly discomfiting, a gothic love song which promises that “the dark between my heart and his is as good as a diamond chain”. As if to restore some semblance of emotional balance, elsewhere the beauty runs clear and bright. The thrumming “My Friends” is a simple but joyous rush of accordion, banjo, cello and the kind of freight-train whoops which recall Fleet Foxes’ “Ragged Wood”; the closing passage feels like bursting out of some shaded copse into a patch of pure sunlight. “Sophia”, too, begins desultorily, the narrator “shy and tired-eyed”, but rises up on the back of Marling’s octave-leaping vocal before transforming itself, improbably but delightfully, into a lip-smacking country hoedown.

It’s deeply impressive. Not just because the songs and performances are stronger and more consistent than ever before, but because at 21 Marling seems so determined not to settle into a niche which could easily confine her. She has come a long way in a short time, and has undoubtedly got further to travel. For now, we should simply savour the sound of an artist setting herself new targets and hitting each one with real panache.
Graeme Thomson